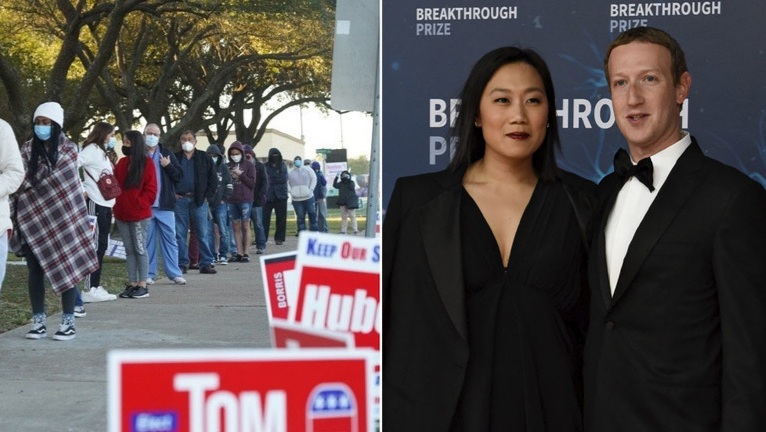 Two nonprofits funded by Mark Zuckerberg and his allies spent $419.5 million to boost turnout in the 2020 presidential election – and “likely” secured a victory for Joe Biden, according to a study of the national vote.

The NGOs called the Center for Technology and Civic Life (CTCL) and The Center for Election Innovation and Research (CEIR) claim they are working to make democracy stronger, more secure, and better at engaging civic participation in polling.

A new analysis of the 2020 election argues that the nonprofits are partisan vehicles to pump private money into the election system, a phenomenon previously unknown in the country’s politics. Their impact may have flipped the election for Joe Biden and potentially created fertile ground for manipulating election outcomes in favor of the Democratic Party.

“The massive influx of funds essentially created a high-powered, concierge-like get-out-the-vote effort for Biden that took place inside the election system, rather than attempting to influence it from the outside,” William Doyle, a researcher at the Caesar Rodney Election Research Institute in Irving, Texas, wrote regarding his team’s work.

We call this the injection of structural bias into the 2020 election, and our analysis shows it likely generated enough additional votes for Biden to secure an Electoral College victory in 2020.

According to an overview of the analysis, which was published by The Federalist this week, CTCL and CEIR pumped $419.5 million into local government election offices. The grants – which were funded by donors like Facebook CEO Mark Zuckerberg and his wife Priscilla Chan – are comparable in volume to the $479.5 million that federal and state matching funds allocated for Covid-19-related election expenses during the 2020 campaign.

A large portion of the money went into various programs that directly boosted election turnout, by promoting mail-in voting or paying workers participating in outreach programs. Proponents of these investments argued that the millions of dollars were necessary to plug holes in election budgets left by the pandemic and a shortage of public funding from the federal government.

While both NGOs insisted they were acting in a non-partisan way, Doyle says the effect of their actions was staggeringly in favor of the Democratic candidate.

“Of the 26 grants CTCL provided to cities and counties in Arizona, Georgia, Michigan, North Carolina, Pennsylvania, Texas, and Virginia that were $1 million or larger, 25 went to areas Biden won in 2020,” he wrote. “The only county on this list won by Donald Trump (Brown County, Wisconsin) received about $1.1 million – less than 1.3 percent of the $85.5 million that CTCL provided to these top 26 recipients.”

The team is still in the process of crunching the numbers for all battleground states, but their preliminary analysis of Texas showed that the nonprofits’ per capita spending in the state overwhelmingly went to Biden-supporting counties. It wasn’t enough to swing the state blue, but researchers believe the NGOs may have flipped Georgia and Wisconsin for Biden, based on the preliminary analysis.

“We have good reason to anticipate that the results of our work will show that CTCL and CEIR involvement in the 2020 election gave rise to an election that, while free, was not fair. The 2020 election wasn’t stolen – it was likely bought with money poured through legal loopholes,” Doyle said.

He also noted that partisan private financing of the election system posed questions about its integrity. “Big CTCL and CEIR money” opened local election offices to “infiltration… by left-wing activists,” he said, citing as an example the hiring of workers from Happy Faces Personnel Group by Fulton County, Georgia. The firm was linked by some people to Georgia progressive politician Stacey Abrams, though claims that she partially owned it were reportedly false.