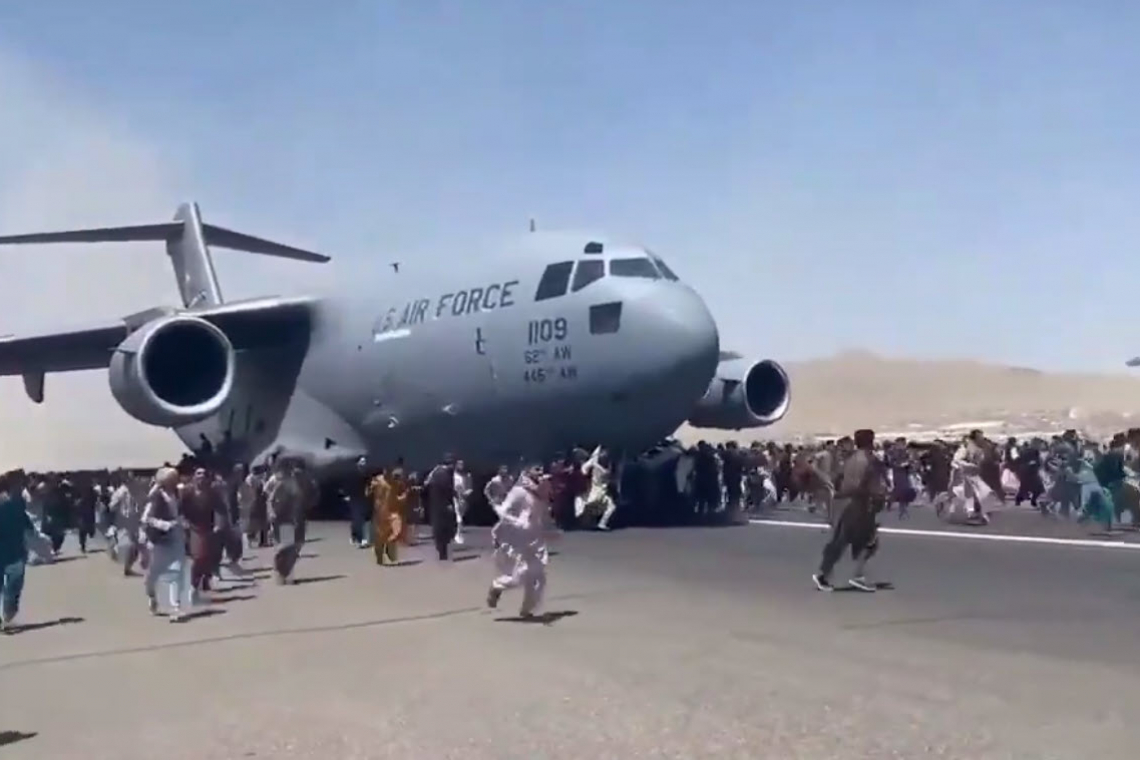 The situation in Afghanistan has gotten so dire that people trying to flee the Taliban are holding onto landing gear of the C-17’s evacuating Americans from Kabul Airport. When the plane takes off and the landing gear retracts, they FALL FROM THE PLANE 1,000 feet in the air.

Video has emerged showing the shear chaos at Kabul Airport as the Biden regime in America refuses VISAS to take Afghans who worked with US Forces, out of the Taliban-conquered country.

The heartbreaking video shows hundreds of Afghanis trying to cling to the OUTSIDE of U.S. Military C-17 Cargo planes as they taxi for takeoff out of Kabul Airport:

Most change their mind as the plane speeds-up for takeoff, and either jump off onto the runway, or fall of due to wind.

Others, however, cling for dear life onto the landing gear until the plane becomes airborne and when that landing gear retracts, they fall from the plane about 1,000 feet up in the sky:

At least one of the two people seen falling off the plane, landed on the roof of a building below; killed on impact:

The reason Afghanis are doing this is because the Taliban is already rounding-up folks who helped the Americans during our twenty years in that country.  The Taliban is beating-to-death and/or beheading such people as they take control over Afghanistan.

Reports are now flooding in that ENTIRE FAMILIES of those who helped the Americans, are being slaughtered by Taliban fighters in city after city.

This web site has compared what’s taking place in Afghanistan with what took place in Saigon, Vietnam as the U.S. departed in defeat back in 1975.  But it turns out that is an unfair comparison; what’s happening in Afghanistan is orders of magnitude worse.

This is what happens when an ILLEGITIMATE President, who came to power using election fraud, is allowed to take office and wield actual power in the USA.  The shear incompetence, vulgar lack of planning, and heartless abandonment of those who helped America, is on display for all the world to see.

The desperation and chaos in Afghanistan and at Kabul Airport is so deep, someone who is fleeing actually left their baby on the runway:

Can you even possibly imagine being so desperate, that you would leave your CHILD in the fervent prayer the Americans might at least save the baby from the fate awaiting the family in Afghanistan?

Tears from my eyes as I contemplated that level of absolute desperation.

By failing to make certain the voting fraud from November, 2020, was corrected.

By allowing a dementia-addled charlatan to be sworn-in as President after his political party rigged the election.  A charlatan whose incompetent staff so fouled-up our exit from Afghanistan that it is now a monumental and historic failure, shaming our entire nation in front of the world.

All those failures on OUR part, have led to THIS.