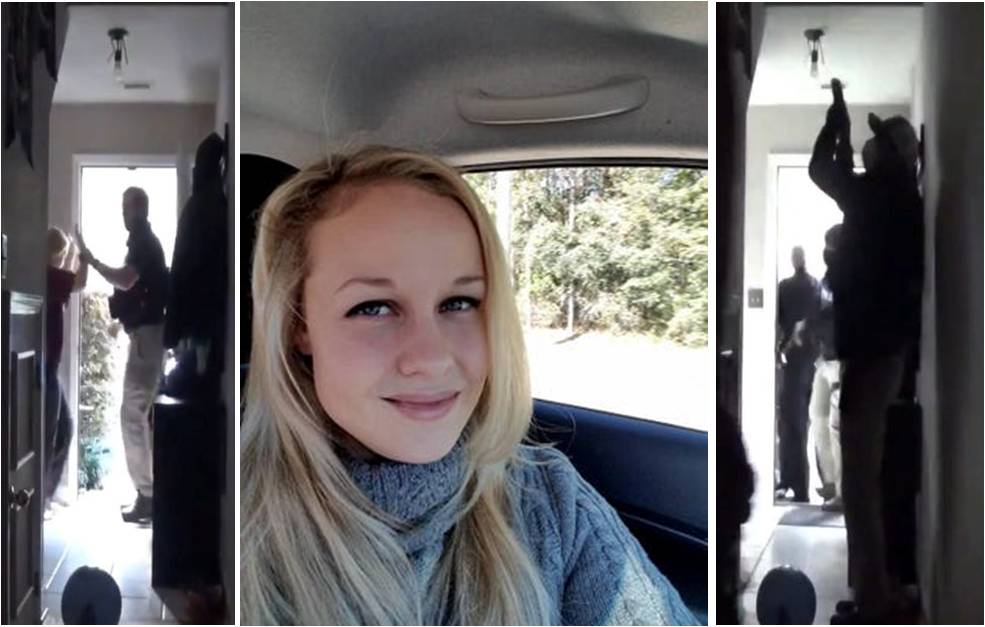 State police brandishing firearms Monday raided the Tallahassee home of Rebekah Jones, the former Department of Health data scientist who built the state’s much-praised COVID-19 dashboard before being fired over what she said was refusing to “manipulate data.”

“They pointed a gun in my face. They pointed guns at my kids,” Jones tweeted shortly before 5 p.m.

Jones — who launched her own COVID-19 dashboard after she was fired, and used crowdsourcing to raise money to support it — said the agents knocked on her door around 8:30 a.m. that morning, took all her “hardware and tech” after showing her a warrant based on a complaint filed by the Florida Department of Health.

A video accompanying the post shows Florida Department of Law Enforcement agents in vests at the front door with guns drawn, asking who else was in the house. She said her husband and two children were inside as they escorted her out of the house.

The video shows an agent entering the house with his gun drawn, calling for her husband to come down the stairs. When an agent told her to calm down, Jones said, “He just pointed a gun at my children!”

“FDLE began an investigation November 10, 2020, after receiving a complaint from the Department of Health (DOH) regarding unauthorized access to a Department of Health messaging system which is part of an emergency alert system, to be used for emergencies only,” Plessinger said.

Plessinger said when agents arrived, they knocked and waited 20 minutes for Jones to answer the door.

“Ms. Jones refused to come to the door for 20 minutes and hung up on agents. After several attempts and verbal notifications that law enforcement officers were there to serve a legal search warrant, Ms. Jones eventually came to the door and allowed agents to enter,” Plessinger said. “Ms. Jones’ family was upstairs when agents made entry into the home.”

The investigation is active, she added.

“As in all cases, our role is to determine the facts of what happened and a State Attorney determines whether or not charges are filed.”

Jones was fired for insubordination in May after being reprimanded several times, state officials said. Her paperwork doesn’t state a cause for her being fired, but she claims she was terminated for refusing to manipulate health data to cast Florida in a more favorable light.

She tweeted: “They took my phone and the computer I use every day to post the case numbers in Florida, and school cases for the entire country. They took evidence of corruption at the state level. They claimed it was about a security breach. This was DeSantis. He sent the Gestapo.”

1/
There will be no update today.

At 8:30 am this morning, state police came into my house and took all my hardware and tech.

They were serving a warrant on my computer after DOH filed a complaint.

The DOH said recently that someone hacked the emergency communications channel. Jones told a reporter that she is not a hacker: “I don’t know how to do that stuff.”

The FDLE affidavit for the search warrant said a special agent spoke to a DOH official with the Preparedness and Response office about a suspected breach of the custom-made communications system for emergency management.

An unidentified subject gained access to the system and sent out a group text saying: “It’s time to speak up before another 17,000 people are dead. You know this is wrong. You don’t have to be a part of this. Be a hero. Speak out before it’s too late.”

The text message was sent from the ESF-8 mail account to 1,750 recipients before the software vendor could stop the message from being transmitted further, the affidavit said.

The ESF-8 account is the state’s emergency support function for public health and medical services and is used by many people from several agencies, including DOH and Emergency Management.

The FDLE investigator claims he determined through his “investigative resources” that an Internet Protocol, or IP, address associated with Jones’s Comcast account was the source of the ESF-8 text message.

An IP address identifies the location  that an Internet connection was made but doesn’t prove that Jones sent the text message, according to IT experts.

Jones told a reporter for the USA Today Network-Florida that her sources at DOH told her an email had gone out across the department from the ESF-8 email account around the time that five of eight team leaders had been fired.

Jones told the reporter that a series of firings and resignations in DOH, including recently departed public information officer Alberto Moscoso’s departure, were “a purge.”

“It’s like a massacre. And those aren’t the only people that have been fired or left,” she said.

Jones also said she has backups of the data and files that power her websites that were stored on the seized hardware.