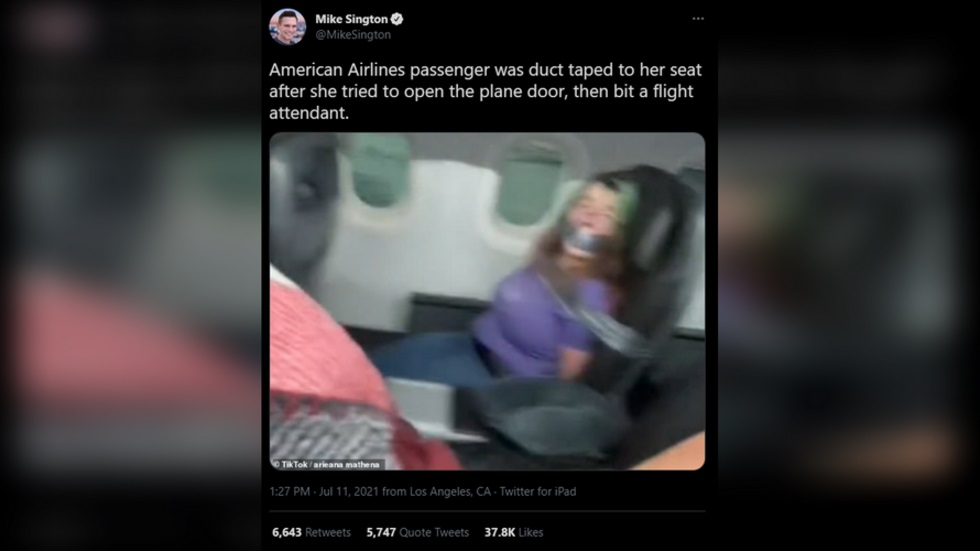 An American Airlines flight spiraled into the surreal after an emotionally disturbed passenger was restrained with duct tape following several midflight no-nos. The airline later defended its Hollywood-esque security measures.

The routine flight from Dallas, Texas to Charlotte, North Carolina quickly became anything but normal after a female passenger began mumbling to the man sitting next to her that she did not want the plane to “fly up anymore.”

The “odd” woman “started getting more and more agitated and very loud, and the man sitting next to her, along with the flight attendants, kindly tried to console her and calm her, but nothing worked,” according to a passenger on the ill-fated flight who spoke with the media about the bizarre ordeal.

The woman, described as in her 30s with green hair, reportedly bolted out of her seat and tried to rip open the plane’s door. She was quickly tackled by flight attendants, who restrained her limbs with duct tact and zip ties, according to the onboard eyewitness.

Passengers sitting in rows in front of and behind the unwell woman were then asked to move out of the way so that flight attendants could duct-tape the misbehaving customer to her seat.

According to one witness, the aircraft’s pilot got on the intercom and urged people to stay in their seats as personnel dealt with a “bad situation on the plane,” without elaborating further.

American Airlines later confirmed the incredible incident, explaining that a “potential security concern” required the plane’s crew to take action. The air carrier also disclosed that the woman “physically assaulted and bit” one of the flight attendants.

“For the safety and security of other customers and our crew, the individual was restrained until the flight landed at [Charlotte] and could be met by law enforcement and emergency personnel. We applaud our crew for their professionalism and quick effort to protect those on board,” American Airlines said.

The incredible midflight drama was initially documented in a TikTok video that later spread across social media. The video shows the woman with duct tape around her mouth and across her chest, preventing her from escaping from her seat. Despite the extreme measures used to restrain her, the woman reportedly yelled obscenities throughout the duration of the flight.

According to media reports, police met the plane in Charlotte and escorted the woman to a hospital, where she underwent a psychiatric evaluation. The woman was promptly placed on American Airlines’ blacklist, according to a spokesperson for the company. It’s unclear whether the woman will face criminal charges.