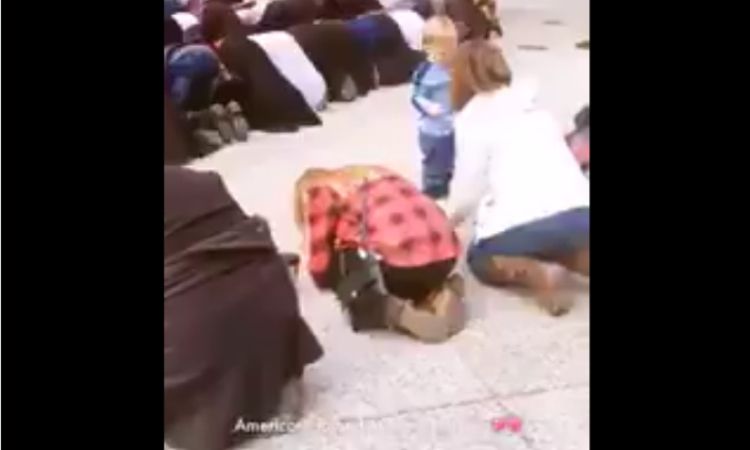 The Left (institutionally) hates Christianity, and that standard explanation, such as its alleged bigotry, we can’t explain why the Left gives Islam a pass.

Christianity stands in the way of the Leftist agenda. Moreover, if the Devil exists, he would favor not just the “false religion” of environmentalism and Marxism, but also postmodernism.

Ultimately, the gospel reconciles God and man, which is not what the Devil wants.

The left in America clearly lost its compass!

The video that we’ve received this morning shows liberal American youth who openly oppose Christianity but kneel with other Muslims and start praying!

This is such a conundrum, but I think I know the answer.

The question of the day is why do liberals love Islam and defend Muslims adamantly while continuing to hate and mock Christians and Christianity.

Christians today are compared to the nuts at Westboro Baptist, or blamed for the Inquisition, slavery, and Nazis.

On the other hand, Muslims today (let me check the year. Oh, it’s 2021) regularly beat, stone, pour acid on, and behead women, gays, and non-Muslims. (What America hears on the news is when a white country gets attacked; when it’s Africans or Asians the Western media doesn’t care at all.)

So Islam and its followers do those atrocities today and daily, and so did the founder, and liberals say “Those people aren’t really Muslims.” I am so frustrated! Why oh why is this happening?

Here’s my answer. The devil is very very smart and knows how to attack every country on Earth in different manners. For America and western Europe, he knows that tricking people into loving Islam will accomplish two things: keep Christians under attack, and drive those who love Islam to hell (or away from Jesus).

Reminder: The purpose of the articles that you will find on this website, are to EDUCATE, not to disinform or grow hate and anger!