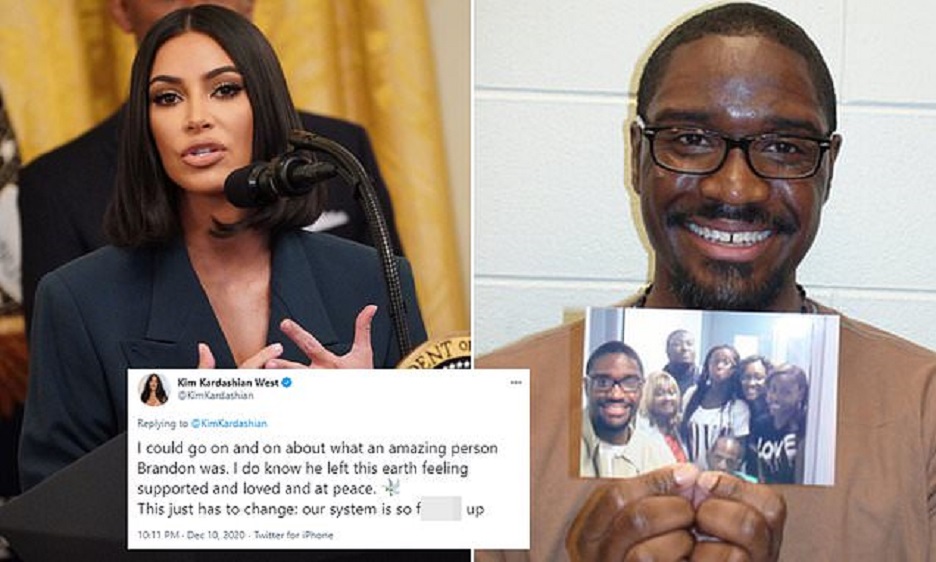 Bernard, 40, received a lethal injection of phenobarbital at the federal prison in Terre Haute, Indiana, in a rare execution of a person who was in his teens when the crime occurred.

He was declared dead at 9.27pm as witnesses, including members of the families of his victims, watched from behind a glass barrier.

In his final words, Bernard addressed the families of Todd and Stacie Bagley through the window, telling them ‘I’m sorry’.

‘That’s the only words that I can say that completely capture how I feel now and how I felt that day,’ he added.

Todd’s mother Georgia Bagley spoke after the execution to say that she forgave him and that his apology ‘helped very much to heal my heart’ after waiting 21 years for justice.

Meanwhile Kim, who has been fighting to commute Bernard’s sentence, mourned his loss, tweeting that he was an ‘amazing person’, claiming she felt ‘so messed up right now’ and that ‘our system is so f****d up’.

Throughout Thursday, there was a growing groundswell by celebrities including Kim Kardashian who were pushing for the execution to be halted, as pictured above

According the Associated Press, Bernard spoke for three more minutes before his death, saying he had been waiting for this chance to say he was sorry – not only to the victims’ family, but also for the pain he caused his own family.

He remained calm as the curtain was lifted around the death chamber and journalists in the press pool claimed he nodded at them in greeting and showed no signs of fear.

He is said to have closed his eyes a minute after the injection but showed no twitching or labored breathing as other executions have. His pulse was taken and he was declared dead after white blotches began to appear on his skin after 20 minutes.

Bernard was 18 when he and four other teenagers abducted and robbed Todd and Stacie Bagley on their way from a Sunday service in Killeen, Texas, in 1999. The couple were shot and killed and then their car was set on fire.

The execution was delayed from 6pm after Bernard’s legal team pushed a final appeal but it was dismissed by the Supreme Court and allowed to proceed.

The families and friends of the Bagleys welcomed the ‘closure needed to move on in life’ following his death, both thanking President Trump for allowing it to proceed.

‘It has been very difficult to wait 21 years for the sentence that was imposed by the judge and jury on those who cruelly participated in the destruction of our children to be finally completed,’ said Todd’s mother Georgia Bagley.

‘This senseless act of unnecessary evil was premeditated and had many opportunities to be stopped at any time during a 9-hour period. This was torture as they pleaded for their lives in the trunk of their own car.

‘Please remember that the lives of family and friends were shattered and we have all grieved for 21 years waiting for justice to finally be served.’

She added, however, that Bernard’s apology before his death ‘helped very much to heal my heart’ and to allow her to forgive him.

‘I can very much say: I forgive them,’ she told reporters through tears, referencing Brandon and his accomplice Christopher Vialva, who was also executed in September.

Dana Ladd speaks on behalf of the family and friends of Charles Woodward, the father of Stacie Bagley. She simply reads the statement. pic.twitter.com/pPyEeQod5r

Protesters remained outside the Federal Death Chamber in Terre Haute, Indiana, on Thursday night as Brandon Bernard was put to death 20 years after he was sentenced

A protest against the execution of Brandon Bernard on Prairieton Road across from the Federal Death Chamber in Terre Haute, Indiana, on Thursday. He was killed by lethal injection

‘On June 21, 1999, our lives were changed forever because this is the day that Todd and Stacie were executed!’ wrote Charles Woodard, Stacie’s dad, on behalf of her family.

‘I pray that Brandon has accepted Christ as his Savior, because if he has, Todd and Stacie will welcome him into heaven with love and forgiveness.’

However, Bernard’s lawyers called his execution a ‘stain on America’s criminal justice system’ as they claimed he ‘never stopped feeling shame and profound remorse’ for his crime.

As the Supreme Court decision was announced, they made a statement stating that ‘those who love Brandon’ are filled with ‘righteous anger and deep sadness at the actions of the federal government in taking his life’.

‘Brandon made one terrible mistake at age 18. But he did not kill anyone, and he never stopped feeling shame and profound remorse for his actions in the crime,’ added attorney Robert C. Owen.

‘Brandon’s execution is a stain on America’s criminal justice system. But I pray that even in his death, Brandon will advance his commitment to helping others by moving us closer to a time when this country does not pointlessly and maliciously kill young black men who pose no threat to anyone.’

Their sorrow was echoed by Kim Kardashian who spoke out again about her support for Bernard after his death.

‘I’m so messed up right now,’ she began in a long Twitter thread.

‘They killed Brandon. He was such a reformed person. So hopeful and positive until the end. More importantly he is sorry, so sorry for the hurt and pain he has caused others.

Kardashian added that Bernard’s attorney called her while he was in the chair to pass on a final message.

‘Brandon said he loves you and wants to say thank you again,’ the attorney allegedly said.

‘His main message that he learned in his life was to not hang out with the wrong crowd. That was so important to him that he shared that with the youth. It got him caught up and he made poor choices.’

She continued that Bernard had hoped the public support for him would help his family and to help reduce any shame they felt.

‘I could go on and on about what an amazing person Brandon was. I do know he left this earth feeling supported and loved and at peace,’ Kardashian concluded.