And The Kraken for the win (explained) 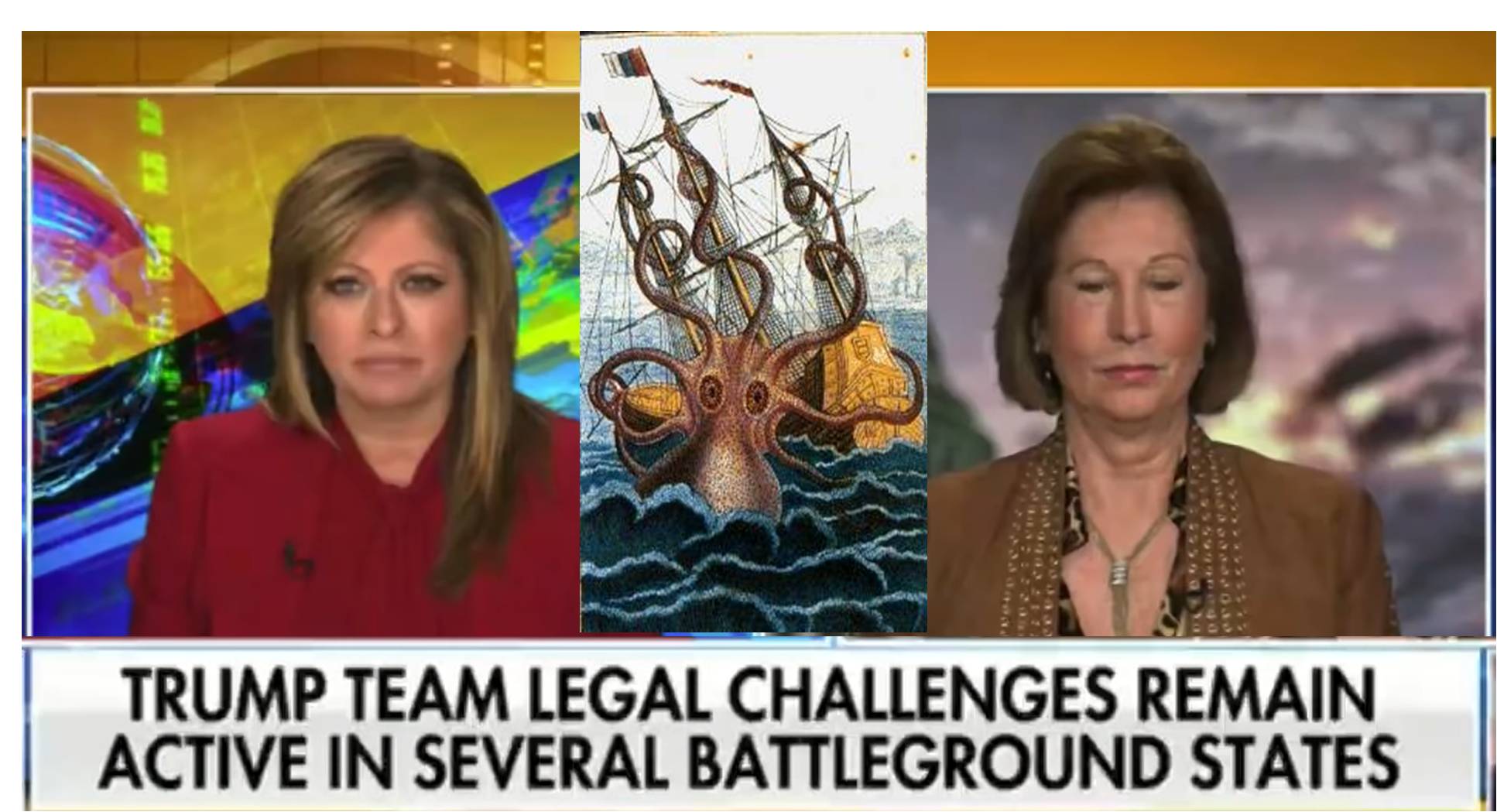 A few days ago, Sidney Powell said that the Trump team would release the Kraken (a mythical giant squid that shatters sailing ships) against the election results that claim Biden won. On Sunday, Powell spelled out what this Trump Kraken looks like – and she vouches for its existence. Based on the details she imparted, the Biden dinghy (for it’s certainly not a ship of state) isn’t just going to take on water; it’s going to a long-deserved rendezvous with Davy Jones’s locker.

Powell, who has been working to save General Flynn from the morass his first attorneys, who were compromised, led him into, is now part of President Trump’s post-election team. On Friday, she appeared on the Lou Dobbs show and memorably said, “I’m going to release the Kraken.”

The problem is that we Trump supporters have been hearing many promises to expose election fraud. And yes, there has been a lot of fraud shown: In myriad jurisdictions, people are testifying about absentee-ballot dumps, banned poll watchers, cemetery votes, etc. But there’s always been the worry that these actions, while true, may not convince a judge (or nine justices) to overturn the election.

Then word started leaking out that statistics could prove that the enormous Biden surges after the polls shut down were statistical impossibilities.

On Sunday morning, however, Sidney Powell appeared on Maria Bartiromo’s show and revealed that the Trump team understands exactly what happened. The statistical analyses are right on the money, and Powell claims she has detailed evidence about who committed election fraud and how they did it. According to her, the evidence is ready to be shown before the certification date, and it may mandate an entirely new election – only one without fraud.

The culprits are Dominion Voting Systems, which makes election software, and Smartmatic, which makes the voting machines on which the software runs. Neither company is American, so our elections are being run through Europe, not America.

You’ve already heard a lot about problems with Dominion. It’s so unreliable that Texas refused to certify it, and there may be evidence that one of Dominion’s vice presidents is a Trump hater and Antifa supporter.

Meanwhile, over at Smartmatic, which three Venezuelan engineers created, there are all sorts of questionable connections. First, the company is incredibly cagey about its overseas ownership – and it may still be tied to Venezuela (that would be Maduro’s Venezuela). In 2014, Smartmatic became a subsidiary of SGO Corp. Ltd., a London-based holding company, with Lord Mark Malloch-Brown as chairman of the board. Brown, who came up through the British Labour Party’s ranks, has close ties to George Soros.

There are also questions about Peter Neffenger, Chairman of the Board at Smartmatic. He’s a retired admiral who worked as the head of the TSA under Obama. Since the election, Neffenger has joined the Biden transition team! Yes, the man from the company whose computers were at the heart of fraud allegations in the allegation is helping Biden move into the White House.

Powell alleges that these companies designed the software and machinery specifically to support voter fraud, that they’re in league with corrupt American politicians, and that they switched hundreds of thousands, even millions, of votes away from Trump in the various contested states (and, one assumes, in others as well). Moreover, Powell says she has first-hand testimony about the fraud and that there’s a veritable “fire hose” of corroborative evidence coming in.

The most crucial line in the entire interview (I think) is what Powell said what Bartiromo asked if she could prove any of this: “I never say anything I can’t prove.”

Here’s the interview and you’ll want to watch every word:

Additionally, after the interview, Powell tweeted that Trump has given her team the go-ahead to expose the fraud:

To be clear: #WeThePeople elected @realDonaldTrump in a #LANDSLIDE.
WE decide that he stays in office. He’s conceding nothing. WE KNOW there was massive #ElectionFraud. MASSIVE
Not only has
.@POTUS ordered to #ReleaseTheKracken #WeThePeople DEMAND IT.
We are #FedUp@RudyGiuliani pic.twitter.com/bgIECGxlIJ

Do you hear the sound of Biden and Co. running for the lifeboats? I’d like to think that I do.