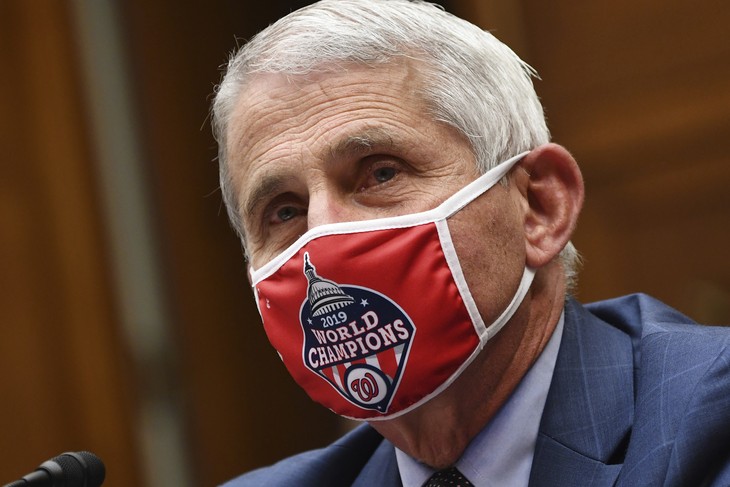 As I’ve written about for some months, it is very, very obvious that the reaction to the epidemic of Chinese Lung Aids sweeping the nation by “public health professionals,” Democrats, and panicked and gutless Republicans (can I have back the two votes I cast for Larry f***ing Hogan?) has nothing to do with saving lives (check out the death rates of the most vulnerable citizens in New York, New Jersey, and Michigan, if you doubt me) and everything to do with creating a “public health” exception to the Constitution, in general, and to the First Amendment, in particular.

The various rules promulgated have never been shown to be particularly useful in combatting the spread of disease, and the people making the rules show daily, by their own actions, that they don’t believe what they are saying. Wearing face masks can’t stop the spread of the virus by anything but lung biscuits. If you can breathe out through your mask and have the virus, you are spreading it. People truly concerned about this should invest in a cellophane bag and electrician’s zip ties and leave the rest of the f*** alone. Social distancing applies to churches and Trump rallies, but somehow, the virus doesn’t affect casinos and rioting people. Curfews would indicate that there is science showing the Wuhan virus is particularly infectious after 9 or 10 p.m.; otherwise, it would show that this just a tool for controlling your movement. The virus has also been shown to home in on Jewish funerals in New York and New Jersey and Jewish homes in New York.

One of the foremost spreaders of Panic Porn is none other than the director of the National Institute of Allergy and Infectious Diseases. Fauci has been a big fan of increasing bureaucratic control over Americans under the guise of “public health” for years. During this election year, his behavior has been nothing short of odious, effectively acting as a Democrat flack whenever given the opportunity (given his immediate staff, this is hardly a shocker). Read Dr. Fauci Isn’t Stupid, He Just Thinks You Are. A couple of days ago, he said it was time for Americans to stop worrying about rights and other bullsh**; they needed to shut up and get in line (read Dr. Anthony Fauci Says It Is Time for Americans to Shut the Hell up and Do What Their Betters Tell Them to Do).

Today he went on his go-to show, Jake Tapper’s State of the Union, to give more bad news to America. We probably shouldn’t count on celebrating Christmas. Sorry, this is the best clip I can find, the pertinent part of the transcript is below.

CNN’s Jake Tapper this morning: “Christmas is probably not gonna be possible.” pic.twitter.com/z56ifNCr3G

TAPPER: Now, you have already encouraged Americans to consider canceling any Thanksgiving plans that involve visiting with somebody else or having visitors come.

I know a lot of Americans are looking ahead, hoping to make plans for other holidays, such as Christmas. But when do you think Americans will next be able to safely gather together for family events like this?

Are you suggesting it probably won’t be able to happen until, I don’t know, Labor Day 2021, Thanksgiving 2021?

FAUCI: You know, it depends on a number of factors, Jake.

For example, we have vaccines now. The first one that came out was highly effective. I anticipate that the second one likely will be comparable. You never can tell until you see the data, but would be comparable. That is great.

But we have to get people to take the vaccine. So, if we get the overwhelming majority of people taking the vaccine, and you have, on the one hand, an effective vaccine, on the other hand, a high degree of uptake of the vaccine, we could start getting things back to relative normal as we get into the second and third quarter of the year, where people can start thinking about doing things that were too dangerous just months ago.

But we have got to put all of those things together, Jake. We can’t just wish it happening. We have got to get the vaccine, it has got to be deployed, and we can’t abandon fundamental public health measures.

You can approach a degree of normality, while still doing some fundamental public health things that synergize with the vaccine to get us back to normal.

TAPPER: So, not until the second or third quarter of 2021, though? Christmas is probably not going to be possible?

FAUCI: Yes, I’m — well, I think that, if we get most of the country vaccinated in the second, third quarter of the year, and the vaccine continues to prove its efficacy, and people adhere to those fundamental measures, I think we can start approaching the degree — it’s not going to be a light switch, Jake.

We are not going to turn it on and off, going from where we are to completely normal. It’s going to be a gradual accrual of more normality as the weeks and the months go by, as we get well into 2021.

The public health nazis have already declared that Thanksgiving is too, too risky. Now they are going after Christmas because it will also serve as a nice backhand to keep those unkempt Christian goobers in their place.

Left unsaid is that there is zero guarantee that any vaccine will be safe or effective when used on a large population. The scramble for a vaccine, I think, is more properly viewed as a race to see who can get the most federal dollars. Beyond the rushed production, we won’t know long-term side effects for quite a while. Plus, you’ll notice that he says that not only will you need the vaccine, but you’ll still be stuck wearing a face diaper and “social distancing” forever.

We are at the point now where the cure being imposed upon us is infinitely more costly than the disease itself. What Fauci is proposing is nothing short of a complete reordering of society based on the unreasoning fear of a virus that is not terribly dangerous to healthy people of any age…much like any other virus. Restaurants can’t survive with the social distancing garbage. The impact from that rolls downhill in all directions. Lots of jobs are eliminated on the service and supply sides. The impact on commercial real estate is going to be immense. Schools can’t carry on even with the barely adequate job they did before the virus. Having three kids in college under the “remote” system, I can testify how horrendous it is. There are reports of thousands of kids in grades 1-12 simply never logging into class. One academic year has already been stolen, and another is in the process. Deaths from missed procedures, suicide, drug abuse, alcoholism, all brought on by idiot Wuhan virus regulations, are skyrocketing.

The only idea Fauci and his fluffers have is more of a failed policy because they don’t care about the virus; they only care about bringing you to heel.

If we put up with this bullsh**, if we pay any attention to this nonsense, we have forfeited any right to call ourselves a free people.