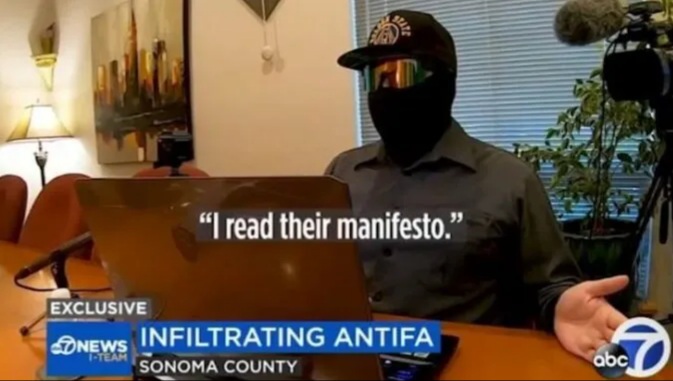 A Trump supporter in California infiltrated the local Antifa group and exposed their hit list containing the details of local Republicans and police officers.

The infiltrator was able to record phone messages and obtain text messages where far-left extremists spoke openly about killing conservatives.

This Antifa group was responsible for the brutal, violent attack on the former home of Officer Brodd who testified for the defence in the Derek Chauvin trial.

Thegatewaypundit.com reports: Someone needs to send this to Chris Wray.

He seems to have trouble telling the truth about the Antifa movement.

Shocking comments were made during an online meeting of far-left activists in Sonoma County, discussing a possible protest for this Saturday.

The ABC7 I-Team has been investigating the group’s possible connection to recent acts of vandalism, including an incident at the former home of a Derek Chauvin defense witness one week ago.

The Trump supporter tells the I-Team he infiltrated a group of activists in Sonoma County who call themselves anti-fascist, and he gave us what he says is their “target list” and recordings of their planning sessions…

…Infiltrator: “So, I saw that they were here, I read their manifesto, and I could tell that they were a threat to the community, and somebody needed to do something about this.”

The manifesto posted online for SoCo (Sonoma County) Radical Action or SRA says, “Do not hesitate, do not wait … the brick in the street is meant to be thrown! The paint in the can is meant to be sprayed! The cop in your head is meant to be killed!”

The Trump supporter was able to join the group that communicates through the encrypted messaging app Wickr.

Infiltrator: “I said, ‘Comrade, you know, I, I want to smash the system the same as you,’ you know, make them not feel alone, because that’s what they really want to hear to know that there’s more people like them.”

He saved messages, documents, and recordings of their meetings.

The I-Team has learned the group’s leader who goes by the screen name “Marb” is a 25-year-old college student, who was arrested for “felony assault on a police officer” last year at this Oakland riot after the death of George Floyd; the district attorney declined to file charges. The Trump supporter says he made this recording in March, when Marb discussed naming the group “SoCo Antifa.”