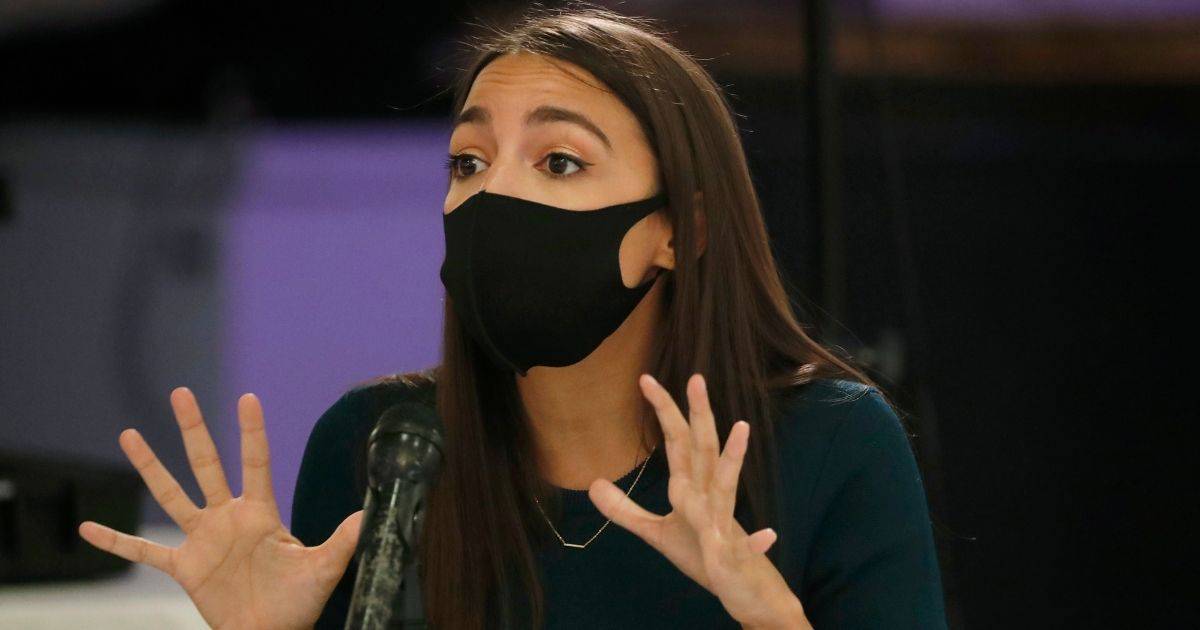 Rep. Alexandria Ocasio-Cortez of New York fired back at critics who said the reason Democrats lost as many as 10 seats in the House was that her party had migrated to the far left by embracing socialism and the “defund the police” movement.

Ocasio-Cortez suggested that anyone who criticizes the “defund the police” movement and socialism is racist.

A defensive AOC was reacting after some of the more moderate Democrats reportedly blamed progressives like her and their far-left policies for the party’s massacre at the polls.

Republicans have gained at least seven seats in the Democrat-controlled House of Representatives, even though multiple polls in the lead-up to the election had confidently projected that Democrats would gain as many as 15 seats.

“We need to not ever use the word ‘socialist’ or ‘socialism’ ever again. … We lost good members because of that,” Rep. Abigail Spanberger of Virginia said during a post-election House Democratic Caucus call Nov. 5.

She also railed against her fellow Democrats’ talk of defunding the police.

“So the whole ‘progressivism is bad’ argument just doesn’t have any compelling evidence that I’ve seen,” Ocasio-Cortez tweeted Nov. 6. “When it comes to ‘Defund’ & ‘Socialism’ attacks, people need to realize these are racial resentment attacks.”

So the whole “progressivism is bad” argument just doesn’t have any compelling evidence that I’ve seen.

When it comes to “Defund” & “Socialism” attacks, people need to realize these are racial resentment attacks. You’re not gonna make that go away. You can make it less effective.

AOC’s assertion that opposing the “defund the police” push is racist has been challenged by numerous minorities, including conservative author Candace Owens and Maryland Republican Kimberly Klacik.

In September, Klacik, running for a Baltimore congressional seat, unveiled a viral campaign ad where she accused the Democratic Party of callously using black people for votes and then immediately ignoring them after the election.

She also slammed the Black Lives Matter movement, which she said was fomenting a race war by demonizing and scapegoating the police.

In her campaign video, Klacik asked several black Baltimore residents if they supported defunding the police. They all said no.

“I had three sons killed in Baltimore,” one man remarked. “If we defund the police officers, it’s going to be worse than that. So no, I’m opposed to that.”

Another man said, “What do you want to defund the police for? How do you defend your city, your community [without the police]? Families are losing people.”

Tens of millions of you have shared the struggle of black people in Baltimore. You cared about our black lives more than our own leaders.

They have done nothing for us.
Now they can’t hide.
We are the change.

As for AOC’s claim that opposing socialism is racist, it bears noting that many minorities — whose families moved to the United States to escape socialism in Cuba and Vietnam — disagree with her.

Democrat Rep. Stephanie Murphy of Florida is alarmed by the socialist policies being pushed by members of her own party.

“I am offended by this whole conversation about socialism,” Murphy said during a speech at the 2019 BakerHostetler legislative seminar in New York, according to the Washington Examiner.

“The idea that in the greatest democracy — the greatest capitalist system in the world — we’re having casual conversation about socialism, offends me,” she said.

Murphy is the first Vietnamese-American woman in Congress. She calls herself a “proud capitalist” whose views were forged by her traumatic past growing up in socialist Vietnam.

“[Capitalism] is the system that built us the greatest nation and the greatest economy in the world,” she said. “Sure, we have to fix the inequities that exist in our system. But this is not the moment to undo the whole system and embrace something that Americans have spent blood and treasure fighting to save other countries from.”

Jun 17, 2021 Morgan
Thanks for subscribing! Please check your email for our latest news.