Australia is hit by ‘biblical’ rodent plague: Millions of mice and rats invade rural towns with one supermarket catching 500 a NIGHT! 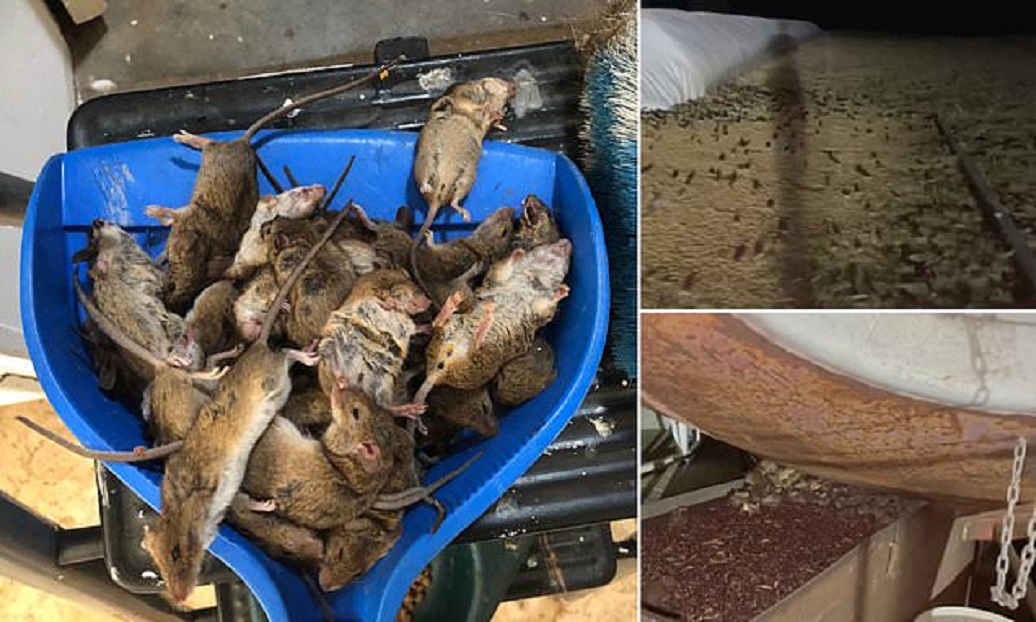 Swathes of mice are infesting rural towns in Australia after its bumper grain harvest and destroying crops as the country continues to battle its out-of-control rodent plague.

Residents in New South Wales (NSW) and southern Queensland have seen an explosion of mice in recent months with the rodents invading homes, fields and grain silos and some residents spotting the rodents in their water supplies.

Experts claim the plague is due to the recent heavy summer rains across eastern Australia which hit the country earlier after years of drought.

The shocking scenes come after three hospital patients were bitten by the creatures at facilities in Tottenham, Walgett and Gulargambone, NSW Health confirmed.

The current mouse infestation across western NSW is a natural occurrence,’ a spokeswoman said.

NSW Western Area Health Service has also reported a case of leptospirosis – a rare disease which can cause kidney failure and meningitis – as a result of mice in domestic dwellings.

This month Melanie Moeris, from Gilgandra, shared footage of hundreds of mice scurrying over machinery on her family’s farm.

She later took to Facebook to write: ‘This is exactly what nightmares are made of! I can’t even watch the videos.’

One resident, Lisa Gore, from Toowoomba, said her friend had found a nest of baby mice in her armchair while another person Karen Fox, from Dubbo, said said found a mouse in the ceiling vent of her home, The Guardian reports.

Meanwhile shopkeeper Naav Singh who works at 5Star supermarket in Gulargambone, said he was now arriving to his store five hours before opening to clean up after the mice and sweep their droppings.

Mr Singh, who had now reduced his stock to prevent items being destroyed by the rodents, claimed on some nights staff were catching ‘over 4000 or 500’ rodents.

He told The Guardian: ‘We don’t want to go inside in the morning sometimes. It stinks, they will die and it’s impossible to find all the bodies … Some nights we are catching over 400 or 500.’

He added: ‘We have got five or six bins every week just filled with groceries that we are throwing out.’

This month Louise Hennessy discovered dozens of rodents in ger water tank filter at her property at Elong Elong in the New South Wales central west – a region where mice have been ravaging crops.

Ms Hennessey posted an image of the dead mice and clumps of fur tangled in the filter to social media as health authorities begged locals to take precautions to protect themselves against the potentially fatal disease leptospirosis amid fears that the rodents could infect the drinking water being supplied to local residents.

Mice were spotted scurrying around the family farm in Gilgandra, New South Wales, earlier this month

The mice plague is not just affecting residents’ health, but their livelihoods and NSW Farmers is now seeking urgent action from the government as the mice plague continues to decimate crops and destroy stored hay.

President James Jackson said grain growers hold grave concerns about the winter crop planting season, which is due to start within weeks.

‘Farmers need some more control options. We are requesting that an Emergency Use Permit be issued for Zinc Phosphide to treat seed,’ Mr Jackson said on Wednesday.

‘This will allow farmers to have their own grain professionally treated, removing the biosecurity risks posed by using foreign seed.

‘It will also reduce the cost of sourcing sterilised or de-vitalised grain by farmers using their own treated seed to be sown for winter cropping.’

NSW Farmers is also seeking some financial assistance through a small grants program.

‘Mouse control is very costly. The severity of the current plague has resulted in the need for multiple aerial and ground bait applications in cropping regions,’ Mr Jackson said.

Mice run across machinery after they invade a farm in Gilgandra, New South Wales, following a boom in the rodent population

‘Potential options we are putting up include a rebate on rodenticide products or a subsidy for ground and aerial baiting. Action is needed now. This mice situation is only getting worse.’

Rodent numbers have exploded just as rural communities across New South Wales and Queensland were recovering from droughts and fields were beginning to return to green.

Favourable crop-growing conditions in recent months have provided the rodents with the ideal environment for eating and breeding.

In Coonamble, about two hours north of Dubbo, resident Anne Cullen said mice were running rampant across the town – and she even woke up with one in her hair.

‘It’s terrible. It’s unbelievable. I came home after a couple of nights away staying down in Dubbo with my daughter, and I went into the house, there were just mice running everywhere,’ she told the Today show.

‘They have eaten my clothes. They have gotten into my wardrobe. There are holes in the couches. They are eating everything.’

In an attempt to reduce their numbers, she now dumps $250 worth of rodent poison around her sheds and sets water traps before the mice emerge in the evenings.

She said farmers in the town were having to burn crops that weren’t safely stored in silos because of contamination.

‘The hay is a worry. Apparently, the mouse droppings and the urine all through, it’s very damaging. It can disease cattle. It might be ruined.’