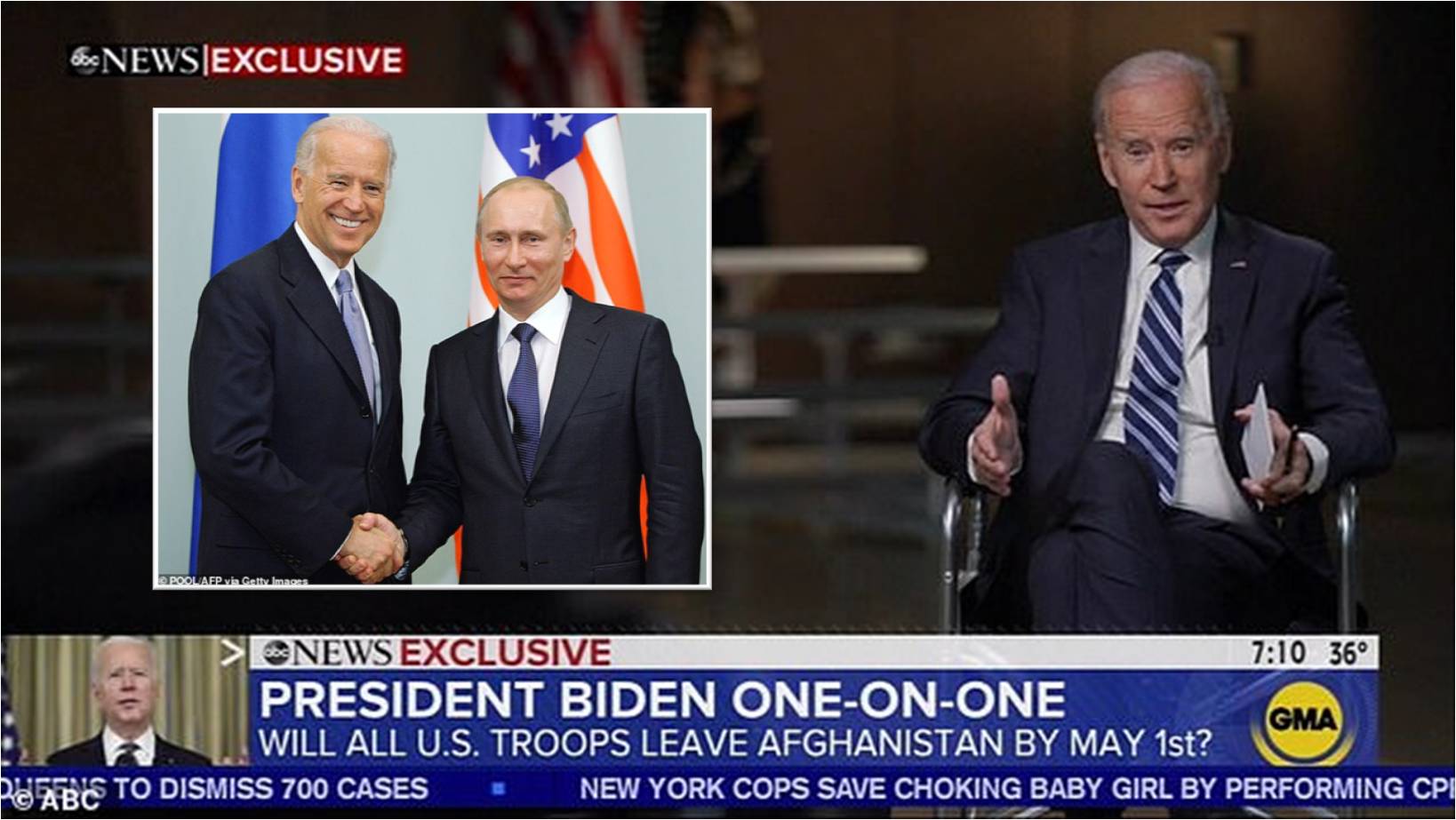 Joe Biden lashed out at Russia in an interview that aired Wednesday morning as he warned Vladimir Putin would ‘pay a price’ for interfering in U.S. elections – even though the president’s own intelligence director concluded the Kremlin did not interfere in the election process.

‘He will pay a price,’ Biden told ABC News host George Stephanopoulos. ‘We had a long talk, he and I. I know him relatively well and the conversation started off, I said, ‘I know you and you know me. If I establish this occurred then be prepared.’

When pushed on what the consequences would be, the president said: ‘The price he’s going to pay, well, you’ll see shortly.’

Biden said he wouldn’t reveal exactly what consequences he would levy, but did indicate it is in America and Russia’s ‘interest to work together’

Biden’s comments come as his Director of National Intelligence Avril Haines released a report revealing that the agency concluded while Putin did authorize an influence campaign, Russia did not target U.S. election processes in the 2020 contest.

According to the assessment, the Kremlin did not make ‘persistent efforts’ on election infrastructure.

The new report did find that Russian proxies tried to ‘launder’ their efforts to swing the election in favor of Donald Trump through people close to the former president.

During Biden’s interview, which aired during ‘Good Morning America’ on Wednesday, the president called his Russian counterpart a ‘killer’ and claimed he has no soul.

‘So you know Vladimir Putin. You think he is a killer?’ Stephanopoulos asked Biden.

A bit earlier, the ABC anchor pointed out: ‘You said you know he doesn’t have a soul.’

‘I did say that to him, yes,’ the president affirmed.

‘And his response was, ‘We understand one another.’ I wasn’t being a wise guy. I was alone with him in his office. That’s how it came about,’ he described.

‘It was when President Bush said he looked in his [Putin’s] eyes and saw his soul. I said, ‘I looked in your eyes and I don’t think you have a soul.’ He looked back and said, ‘We understand each other.”

Biden continued: ‘Look, the most important thing in dealing with foreign leaders in my experience and dealt with an awful lot over my career is just know the other guy.’

Biden’s interview with ABC was only the second sit-down with the media since taking office January 20 – his first aired right before the Super Bowl early last month.

The president has also yet to hold a news conference with members of the press.

On Tuesday, the White House finally announced Biden would hold a press conference on March 25, more than two months after becoming president.

Biden held a call just a few days after taking office with Putin to talk about a range of issues.

The new DNI report Tuesday judges that Russia’s campaign in the U.S. elections was aimed at ‘denigrating President Biden’s candidacy and the Democratic Party.’

‘Moscow’s strategy this election cycle was its use of proxies linked to Russian intelligence to push influence narratives – including misleading or unsubstantiated allegations against President Biden.’

The assessment brings up a range of characters who have already been tied to efforts by Trump allies who sought to muddy Biden by bringing up ties between Biden and his son Hunter in Ukraine.

It describes a network of Ukraine-linked individuals, including ‘Russian influence agent’ Konstantin Kilimnik, who sought to ‘denigrate’ Biden and his campaign. Kilimnik was previously identified as a figure in the Russia probe.

It also sought to discredit the Obama administration by ’emphasizing accusations of corruption by U.S. officials – claims made repeatedly by Trump and his allies.

Moscow also sought to undermine ‘public confidence in the electoral process and exacerbate sociopolitical divisions in the U.S.’ – during a tense campaign and its aftermath that would result in a MAGA mob storming the Capitol when Congress met to count the Electoral College votes that made Joe Biden the winner.

The report also identifies Ukrainian parliamentarian Andrii Derkach as someone who tried to use ‘prominent U.S. persons and media conduits to launder their narratives to U.S. officials and audiences.