Biden catastrophic mistake: The Russian Fleet imposed a naval blockade on Ukraine and is preparing for landing – They are fortified with sandbags! (video) 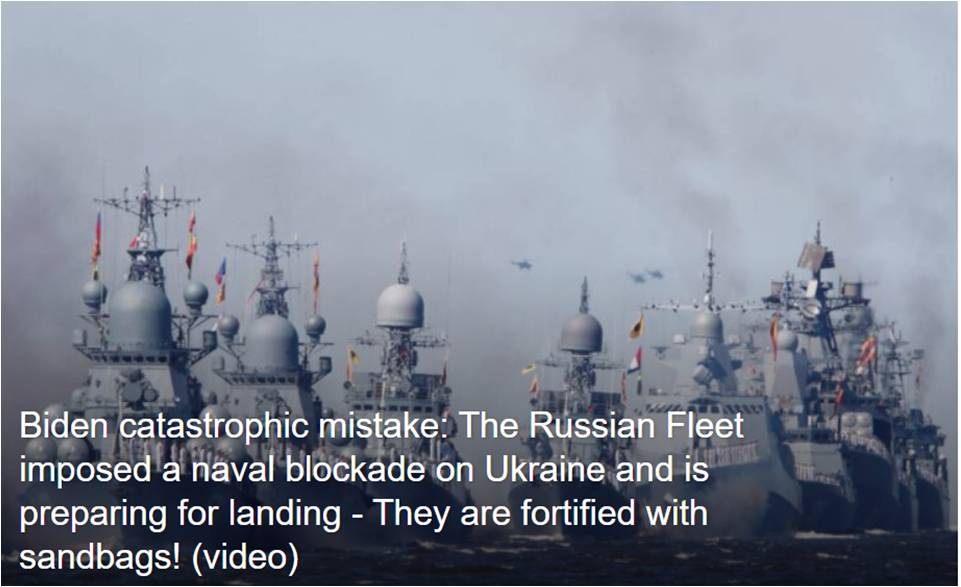 Russia has declared a full-blown act of war, imposing a naval blockade on Ukraine until October, closing the Kerch Strait and the Sea of ​​Azov.

This is a dramatic escalation of the security situation.

The mistake is 100% of Biden who thought Russia was bluffing. Eventually he was exposed and showed tremendous timidity both with the phone call to Putin and with the cancellation of the mission of American ships in the Black Sea. If he did not intend to send troops, then he should not have prepared Ukraine for war.

Russia has just imposed a naval blockade on the ports of Mariupol and Berdyansk.

It is a “pure act of war” and is treated as such by international law. No country can impose a naval blockade on the other except in a state of self-defense

We had mentioned that these areas are a target of a Russian landing.

Recently, there was a protest from Ukraine for the restriction of free navigation in the Black Sea.

Watch the video with the sandbags here

Closes the Kerch Straits until October

“Russia closes the strategically important Kerch Straits on the Black Sea to warships and foreign ships from next week until October 2021, closing the Ukrainian ports of Mariupol and Berdyansk.

An incident reportedly took place between a Ukrainian rocket and five Russian FSB ships in the Sea of ​​Azov.

The Ukrainian Navy reports that FSB ships tried to harass Ukrainian ships in the Sea of ​​Azov by making provocative and dangerous maneuvers.

The Ukrainian Foreign Ministry has reacted strongly to the announcement of a Russian naval blockade of the Kerch Strait and the Sea of ​​Azov. Kiev demands the immediate termination of the decision and the cancellation of the illegal naval “quarantine” in the waters of the Black Sea.

“Such actions by Russia are another attempt to violate the principles and laws of international law. Russia has been trying to usurp Ukraine’s sovereign rights as a coastal state since Ukraine has the right to regulate navigation in the Black Sea.

We call on our international partners to increase political and diplomatic pressure on the aggressor state to overturn the naval blockade and end the escalation in the Azov and Black Sea region.

This Russian act is a major violation of the freedom of navigation guaranteed by the Convention on the Law of the Sea. According to the Convention, Russia must not obstruct or obstruct the sea voyage through the international Straits to the ports of the Sea of ​​Azov.

Russia is now escalating not only on land but also at sea. It transports ships from the Caspian Sea and reinforces its military forces in the Black Sea-Azov region without international law. In violation of international law, it closes the area for warships and ships of other states.

In Donetsk, meanwhile, Russian forces are fortifying buildings and areas with sandbags in preparation for war in urban areas.

At the same time, the military was ordered to prepare hospitals and administrative buildings for a possible armed conflict. This is the official briefing from the Donbas authorities.

At the same time, shelters are being inspected, and military forces are adding extra beds to hospitals and sandbags to administration buildings and critical areas within the city.

Even files are withdrawn from “state” institutions. The preparation of the shelters has started and in some hospital centers they are preparing the premises with the addition of extra beds.

An order was issued to the Donetsk Regional Traumatology Center to release 60% of the beds and to arrange shelters by the 21st of the month.