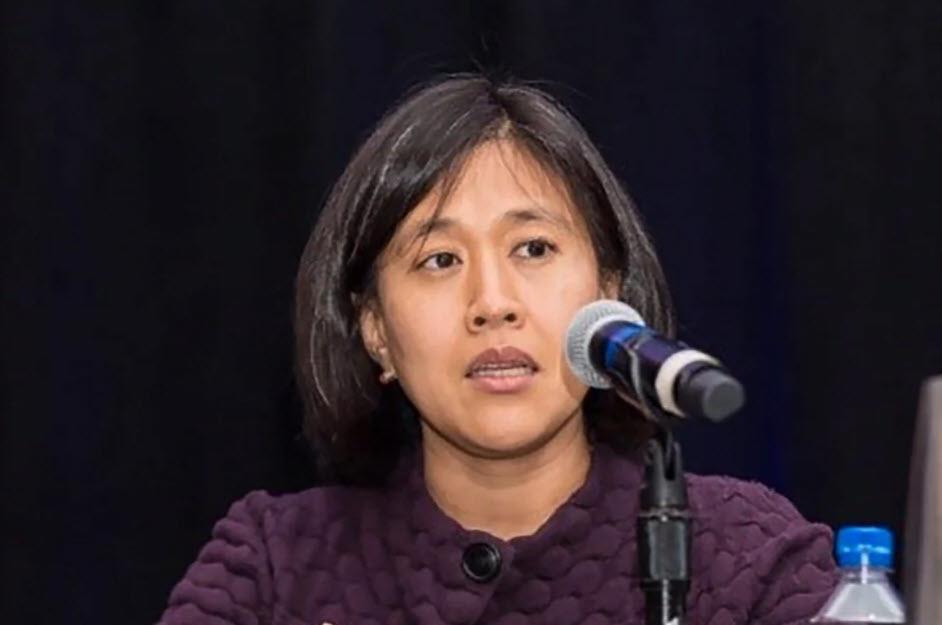 One day after it was revealed that Joe Biden’s son, Hunter, was being probed for tax fraud and Chinese influence peddling, the Biden team – desperate to bury the fact that his family is beholden to Chinese dictator for life Xi Jinping – announced Katherine Tai,  a trade lawyer with a history of taking on China, would replace Lighthizer as US Trade Representative; Tai is on record as saying China needs to be confronted strongly and strategically.

Born in Connecticut to Taiwanese parents, Tai speaks Mandarin fluently and is a graduate of Yale University and Harvard Law School. She taught English for two years at Zhongshan University in Guangzhou, southern China, from 1996 to 1998 as a Yale-China Fellow. She gained fame as the Democrats’ leading trade counsel in negotiating stronger labor provisions with the Republicans’ Lighthizer-led team in the US-Mexico-Canada trade agreement.

If confirmed by the Senate, Tai would inherit a critical position of continuing the US trade war with China, and would be tasked with enforcing America’s import rules and brokering trading terms with China and other nations.

In choosing Tai, the senior trade lawyer on the House Ways and Means Committee, the Biden team likely signals an intent to return to a more multilateral trade approach to advance US trade interests and confront growing economic competition from China, according to CNBC. Biden and Vice President-elect Kamala Harris emphasized Tai’s experience in a press release Thursday.

“Her deep experience will allow the Biden-Harris administration to hit the ground running on trade, and harness the power of our trading relationships to help the U.S. dig out of the COVID-induced economic crisis and pursue the President-elect’s vision of a pro-American worker trade strategy,” the Biden transition team wrote.

Tai would succeed current trade czar Robert Lighthizer, whose achievements during the Trump administration include a more-forceful tact in negotiations with Beijing and the imposition of hundreds of billions of dollars worth of tariffs on goods imported from China.

Though Tai may favor multilateral enforcement mechanisms more than Lighthizer, her leadership as USTR wouldn’t necessarily signal a change to the tougher stance toward China. She has said that China should be addressed forcefully and strategically.

“They both also have a long history of dealing with China’s unfair practices, the most pressing trade issue of our time,” according to former top White House trade negotiator Clete Willems. “Where Katherine’s approach is most likely to differ is on how she uses the WTO system and alliances to pressure China to change behavior.”

From 2007 to 2014, Tai successfully litigated Washington’s disputes against Beijing at the WTO, the global trade organization based in Geneva, Switzerland. Lighthizer and his team, frustrated with what they viewed as slow-moving bureaucracy and China’s influence at the WTO and World Bank, often opted to work around the WTO and take a more direct approach through tariffs. The U.S. still has import duties on $370 billion of Chinese imports.

In August, Tai called for a different approach to China from the years-long tariff war waged by Lighthizer and said the use of import taxes are actually a defensive maneuver. Rep. Don Beyer, D-Va., said in a press release Wednesday evening that Tai would be a smart choice for USTR based on their time working together on the Ways and Means Committee.

“She is smart, deeply knowledgeable, and committed to getting trade policy right for our workers, businesses, and the environment,” Beyer said.

“Katherine is widely respected and well-liked, but will also be a tough and principled negotiator,” he added. “She is exactly the right kind of cooperative leader to help return rationality to our trade policy and restore the respect of our allies around the world.”

That’s likely to appeal to Biden, who has suggested he would favor a return to a more multilateral, ally-based approach and a move away from President Donald Trump’s “America First” approach.

Commenting on Tai’s appointment, the HK based SCMP quoted Wu Xinbo, director of Fudan University’s American studies centre, said Tai’s previous experience in setting US strategy in trade disputes with China at the WTO meant she was skilled in applying pressure to China on a multilateral platform.

“In contrast to Trump’s and Lighthizer’s approach, which favours bilateral trade war, Biden doesn’t see tariffs as the way to go,” Wu said. “Under Biden, Tai could be instrumental in implementing the strategy of recruiting allies and ganging up on China at the WTO.”

Meanwhile, Shi Yinhong, a professor on international relations at Renmin University in Beijing and a government adviser, said Tai’s nomination might be another “negative signal” for China-US relations and might continue Washington’s tough stance on China, given Tai’s experience in handling trade issues with China.

“This might not be good news for China, given that she handled the trade disputes with China,” Shi said. “It is not an issue of her Chinese-language skills or ethnicity. We also need to observe whether she has real political influence on Biden.” Shi said China might “not be very excited at all” about the choices of Tai as the US trade representative and Pete Buttigieg as US envoy to Beijing, both of whom China knows little about.

Biden has said previously that he will not immediately roll back tariffs imposed on Chinese products without a full review of the interim trade deal signed with China in January, and consultation with US allies.

Wang Yong, director of Peking University’s international political economy centre, said Tai’s selection was a positive move for future trade negotiations between China and the US.

“Tai is an American-born Chinese who speaks fluent [Mandarin],” he said. “She probably has a better understanding of Chinese culture and negotiating style. This is her advantage and her background and qualities will be conducive to advancing dialogue and exchanges between the two countries.

“The Biden team has already expressed that they think it is unrealistic for China and the US to decouple. So I believe the Biden administration will eventually remove all the tariffs put in place by the Trump administration, because American businesses and consumers have suffered from that. “The US’ negotiating tactics will also need to change.”

Chinese Foreign Minister Wang Yi said on Monday that China would fulfil its commitments under the interim deal while also calling for  a resumption of dialogue on economic policy coordination and a bilateral investment treaty.