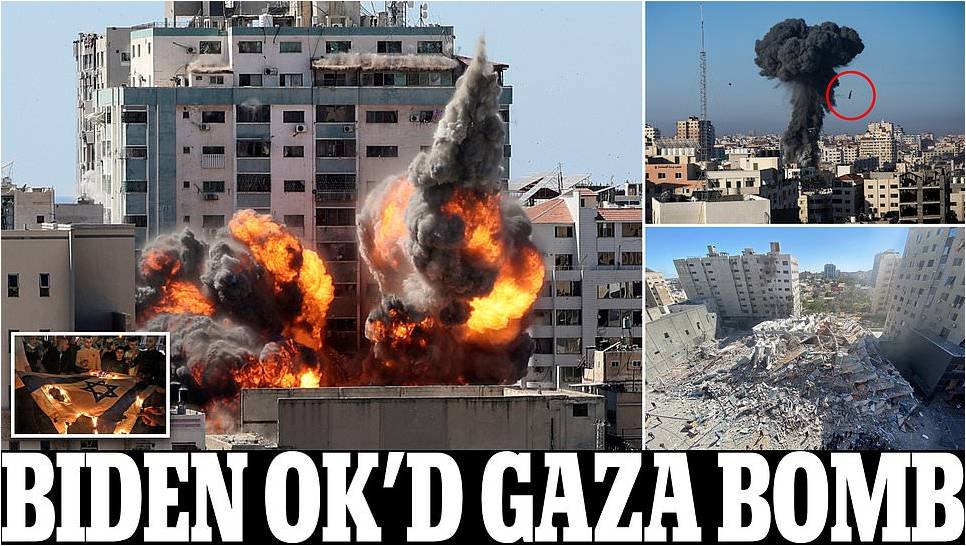 Israel ‘claims it shared smoking gun evidence with US that Hamas used destroyed building that housed The Associated Press and Al Jazeera in Gaza’ as news organizations demand answers.

Government officials said the Israeli President Benjamin Netanyahu shared a ‘smoking gun’ with US President Joe Biden in their phone call on Saturday.

A source close to Foreign Minister Gabi Ashkenazi said: ‘We showed them the smoking gun proving Hamas worked out of that building’. He added Biden had ‘found the explanation satisfactory’, without providing details of the evidence.

He said the intelligence had not been shared more widely because the US were the only country to request more information on the strike on the Al-Jalaa building, the Jerusalem Post reported.

The Israeli Air Force dropped three bombs on the building, collapsing it in a giant cloud of dust, on Saturday afternoon after giving journalists a one hour warning to evacuate the premises.

IDF spokesperson Hidai Zilberman said the force had been ‘very clear’ about the evidence on which the strike was based.

He said ‘a Hamas research and development unit, Hamas military intelligence, and offices of the Palestinian Islamic Jihad organisation’ were housed in the building.

‘A building that has Hamas and Islamic Jihad assets in it needs to be brought down’, he said, adding he hoped the strike would deter Islamist organisations from using media offices as human shields in the future.

He said ‘a highly advanced technological tool’ that the militant group used in the fighting was ‘within or on the building.’

But, Conricus said he could not provide evidence to back up the claims without ‘compromising’ intelligence efforts. He added, however: ‘I think it’s a legitimate request to see more information, and I will try to provide it.’

During a call on Saturday, Biden told Netanyahu he continues to support Israel’s right to defend itself but expressed concern over deaths on both sides.

‘He raised concerns about the safety and security of journalists and reinforced the need to ensure their protection,’ the White House said.

Biden also reaffirmed the United States ‘strong support for Israel’s right to defend itself against rocket attacks from Hamas’ in his call with Netanyahu.

At least 145 people in Gaza and eight in Israel have been killed since the fighting erupted on Monday night.

The IDF said in a statement: ‘The building housed the offices of civilian media, which the terrorist organisation Hamas hides behind and uses as human shields,

‘The terror organisation Hamas deliberately places its military assets in the heart of the civilian population in the Gaza Strip.’

The Israeli military has not yet provided any evidence to back up the claims.

The Associated Press and Al Jazeera both condemned the strike.

‘The world will know less about what is happening in Gaza because of what happened today,’ AP President and CEO Gary Pruitt said in a statement.

‘We are shocked and horrified that the Israeli military would target and destroy the building housing AP’s bureau and other news organizations in Gaza.’

‘This is an incredibly disturbing development. We narrowly avoided a terrible loss of life,’ he said, adding that the AP was seeking information from the Israeli government and was engaged with the U.S. State Department to learn more.

For AP journalists, it was a difficult moment. Most of the AP staff has been sleeping in the bureau, which includes four bedrooms in an upstairs apartment, throughout the current round of fighting, believing that the offices of an international news agency were one of the few safe places in Gaza.

In a territory crippled by an Israeli-Egyptian blockade, it was equipped with a generator that offered the rare comforts of electricity, air conditioning and running water.

Just a day before the bombing, AP correspondent Fares Akram wrote in a personal story that the AP office was the only place in Gaza were he felt ‘somewhat safe.’

‘The Israeli military has the coordinates of the high-rise, so it’s less likely a bomb will bring it crashing down,’ Akram wrote.

The next day, Akram tweeted about running from the building and watching its destruction from afar.

Akram said he was resting in an upstairs room when he heard panicked screams from colleagues about the evacuation order. Staffers hastily gathered basic equipment, including laptops and cameras before fleeing downstairs.

‘I am heartbroken,’ Akram said. ‘You feel like you are at home. Above all, you have your memories, your friends. You spend most of your time there.’

The Foreign Press Association, which represents some 400 journalists working for international media organisations in Israel and the Palestinian territories, expressed its ‘grave concern and dismay’ over the attack.

‘Knowingly causing the destruction of the offices of some of the world’s largest and most influential news organisations raises deeply worrying questions about Israel’s willingness to interfere with the freedom of the press,’ it said. ‘The safety of other news bureaus in Gaza is now in question.’

Joel Simon, executive director of the Committee to Protect Journalists, said the attack raises concerns that Israel is targeting the media ‘to disrupt coverage of the human suffering in Gaza.’ He demanded ‘detailed and documented justification’ for the attack.

The International Press Institute, a global network of journalists and media executives, condemned the attack as a ‘gross violation of human rights and internationally agreed norms.’

For 15 years, the AP’s top-floor office and roof terrace were a prime location for covering Israel’s conflicts with Gaza’s Hamas rulers, including wars in 2009 and 2014.

The news agency’s camera offered 24-hour live shots as militants’ rockets arched toward Israel and Israeli airstrikes hammered the city and its surrounding area this week.

Mostefa Souag, acting director-general of Al Jazeera Media Network, called the strike a ‘war crime’ and a ‘clear act’ to stop journalists from reporting on the conflict.

‘The aim of this heinous crime is to silence the media and to hide the untold carnage and suffering of the people of Gaza,’ he said in a statement.

Al-Jazeera, the news network funded by Qatar´s government, broadcast the airstrikes live as the building collapsed.

A video broadcast by Al-Jazeera showed the building’s owner, Jawwad Mahdi, pleading over the phone with an Israeli intelligence officer to wait 10 minutes to allow journalists to go inside the building to retrieve valuable equipment before it is bombed.

‘All I’m asking is to let four people … to go inside and get their cameras,’ he said. ‘We respect your wishes, we will not do it if you don’t allow it, but give us 10 minutes.’ When the officer rejected the request, Mahdi said, ‘You have destroyed our life’s work, memories, life. I will hang up, do what you want. There is a God.’

‘The targeting of news organisations is completely unacceptable, even during an armed conflict. It represents a gross violation of human rights and internationally agreed norms,’ Barbara Trionfi, the executive director of the International Press Institute, said.

Some press freedom advocates said the strike raised suspicions that Israel was trying to hinder coverage of the conflict. The New York-based Committee to Protect Journalists demanded Israel ‘provide a detailed and documented justification’ for the strike.

‘This latest attack on a building long known by Israel to house international media raises the spectre that the Israel Defence Forces is deliberately targeting media facilities in order to disrupt coverage of the human suffering in Gaza,’ the group’s executive director, Joel Simon, said in a statement.

The strike on a building known to have the offices of international media outlets came as a shock to reporters who had felt relatively protected there.

‘Now, one can understand the feeling of the people whose homes have been destroyed by such kind of air attacks,’ Al-Jazeera producer Safwat al-Kahlout, who was at the bureau in Gaza when the evacuation warning came, told the broadcaster Saturday.

‘It’s really difficult to wake up one day and then you realise that your office is not there with all the career experiences, memories that you’ve had.’

The New York Times joined other news organizations in expressing alarm about the targeting of al-Jalaa tower.

‘The ability of the press to report on the ground is a profoundly important issue that has an impact on everyone.’ the newspaper’s vice president of communications, Danielle Rhoades Ha, said.

‘A free and independent press is essential to helping to inform people, bridge differences and end the conflict.’

Both news organisations have demanded an explanation for the airstrikes, which also sparked widespread protests across the United States. Model Bella Hadid was seen among those on the streets of Brooklyn.

Groups gathered to show solidarity with Palestinians in cities including New York, Boston, Washington, Montreal and Dearborn, Michigan on Saturday.

About two thousand people turned out in the Bay Ridge area of Brooklyn, chanting ‘Free, free Palestine’ and ‘From the river to the sea, Palestine will be free.’

They waved Palestinian flags and held placards that read ‘End Israeli Apartheid’ and ‘Freedom for Gaza.’

Many protesters wore black and white, and red and white, keffiyeh scarves, while drivers sounded car horns and motorcyclists revved their engines as the sun beat down.

Several Jewish people attended, carrying placards that said ‘Not in my name’ and ‘Solidarity with Palestine’ as the protesters took over a street in the area which has a large Arab population.