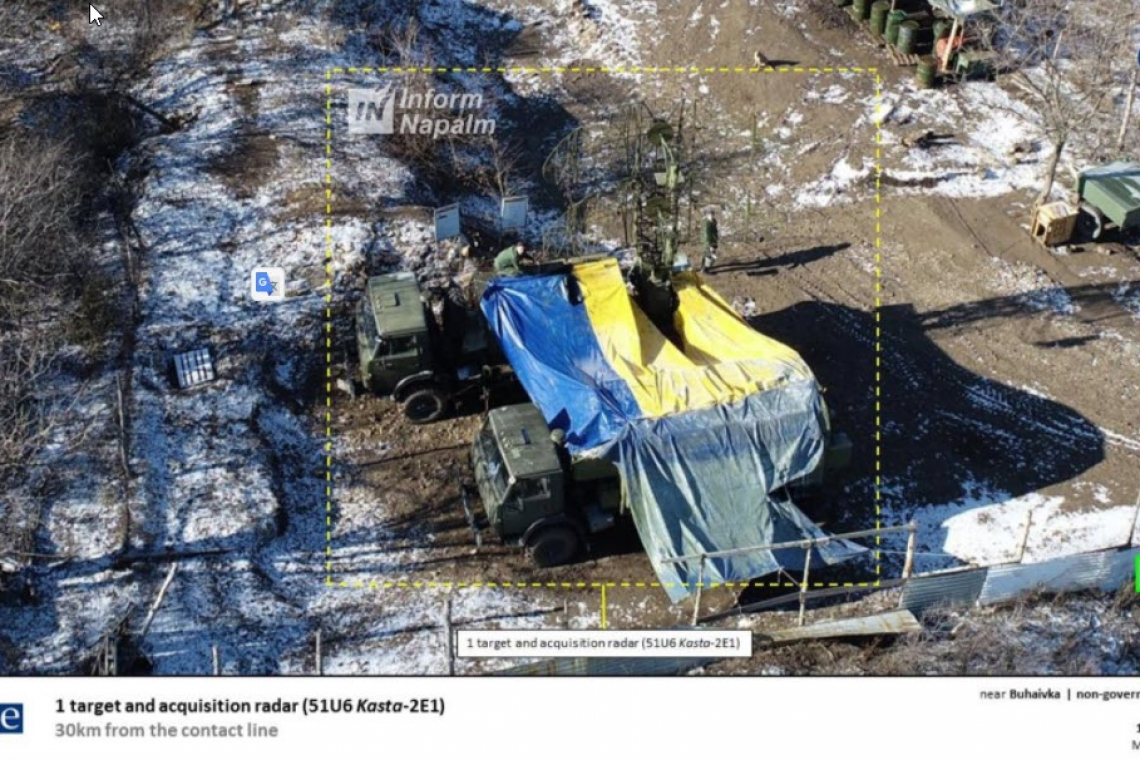 NATO MORTARS are being fired against civilians in Luhansk, Ukraine only this time, Russia is moving marked Russian military radar into the area.  No more unmarked “little green men” now it’s open Russian army.  Direct war with Russia looms – again, thanks to the Biden corrupt presidency.

First, a little background.  Ukraine used to be part of the Soviet Union.  Back in the 1950’s then Soviet Chairman Kruschev “gave” the land area peninsula called “Crimea” to Ukraine.  For at least 300 years prior to that moment, it was, throughout ALL of recorded history, known as “Russian Crimea.”

The people who live there, speak Russian.  Their family histories are Russian. In 1950-something, Kruschev “gave it” away to Ukraine.

Back in 2012 Europe was trying to convince Ukraine to leave Russia’s “sphere of influence” and join the west.  Europe and the United States had been chipping away at Russia since the collapse of the Soviet Union, after the USA promised Soviet General Secretary Gorbachev that “NATO would not move one inch east” back in 1991-92 after the Soviet Union collapsed.

First, Estonia, Latvia, and Lithuania went with Europe/USA and joined with NATO.  Then Poland went.

The Russians watched, helplessly for years, as these countries allowed NATO to build bases and airfields . . . all closer and closer to Russia.  The joke became “Russia wants war, look how close they put their COUNTRY to our bases”

With the fall of the Soviet Union in 1991, Russia found itself with massive problems at home, and they needed time to fix those problems at home.  Russia simply didn’t have the resources, the military might, or the money, to try to stop NATO from encroaching closer and closer.

Fast-forward to about 2010, getting Ukraine to voluntarily align with Europe offered big military advantages to the west.  It would be the final country to come into NATO, and allow NATO first-strike weapons to be placed there.   Such weapons could nuke Moscow in less than five minutes.  More importantly, they could reach Russia’s nuclear arsenal within about 8 minutes.  That would make a decapitation strike by NATO, an actual possibility.  NATO could shoot and destroy Russian nuclear deterrents faster than Russia could react to protect itself.  In one fell swoop, Russia could be conquered.

As Europe enticed Ukraine to join with the west, Ukrainian President Victor Yanukovich proved to be troublesome.  He was favorable to Russia.   He grew up with Russia as an ally and protector.  He was not convinced that moving away from Russia’s sphere of influence would be a good thing for Ukraine.  After years of negotiations, Yanukovich DECLINED Europe’s offers and chose to remain aligned with Russia.

Well, that just wouldn’t do.

The US and Europe had spent vast sums of money in Ukraine to woo the country.  They weren’t going to just walk away.

So Europe and America did, what Europe and America always do: They began funding an insurgency inside Ukraine.  Creating civil unrest.  Protests, then riots.  Later, escalations to armed attacks within Ukraine, all to destabilize President Yanukovich and his government.

At its apex, the protests and riots turned very ugly.  Numerous people were shot, blamed on government forces, but in reality, by European/American Snipers who shot people on both sides to cause an eruption of violence!

When horrific violence finally erupted, Yanukovich fled the country to Russia.  Europe and America backed a replacement government and Ukraine ostensibly came into the European/American Sphere of Influence.

For Russia, this was just too blatant; too overt, and too close to home.   It could not be tolerated by Russia.

So Russia started fomenting trouble for the American/Europe-installed government of Ukraine.   Russia began in the Crimea which had an almost 100% Russian-speaking population.

Crimeans, seeing what Europe and the US did to the government in Kiev, decided they wanted to return their land home to Russia.  They began a movement to secede from Ukraine and return to Russia.   Kiev wouldn’t allow it and sent troops to quell the movement.

Fighting erupted between the people of Crimea and Ukraine forces loyal to the US/Europe Puppet government in Kiev.

Then, quite suddenly, “Little Green Men” began appearing in Crimea.   Troops in military uniforms . . . with no flags or patches identifying whose army they were!

Those “Little Green men” began fighting against the Ukraine Army.  While that was taking place, Russia exercised a Treaty option for their naval base on Crimea.  That option allowed Russia to station “a maximum of 25,000 Russian military personnel” at the base.

Quite rapidly, the base was filled and then, they all moved at once.  Ukraine soldiers were immediately overwhelmed and surrendered.

At that moment, Crimea was effectively back under Russia control.  But the world, led by Europe and the US, called it an invasion.  They screamed that Russia had to give Crimea back to Ukraine.  Russia said they would hold a Referendum and ask the people of Crimea to vote.  The US and Europe did not accept this.

The vote took place.  The people of Crimea voted overwhelmingly to re-join Russia.  The Russian Duma (i.e. Congress) accepted the election results and passed legislation accepting Crimea back into Russia.

The world, again, led by Europe and the US, called this an illegal annexation.  Sanctions were imposed on Russia.  They failed.

Ukraine began moving troops on land, and naval vessels by sea, toward Crimea.  With that, people in two eastern provinces of Ukraine, Luhansk and Donetsk, started demanding a referendum so they, too, could rejoin Russia.

Faced with two more large areas trying to leave, Ukraine had to choose whether to try recovering Crimea by force, or stopping the departure of Luhansk and Donetsk.  Ukraine chose to try keeping the two new provinces that were trying to leave.

Those two provinces then held their own vote and the outcome was LEAVE.  They declared themselves the Donetsk People’s Republic (“DPR”) and that’s when Ukraine’s army was ordered to attack.

Shortly thereafter, more “Little Green Men” began appearing, backing the forces of Luhansk and Donetsk.  The Ukrainians sought help from NATO.  They were turned down.

Fighting took place throughout Luhansk and Donetsk for years, but always ended in a stalemate for Ukraine.

Then Donald Trump became US President, and all the troubles in Ukraine . . . stopped.

It’s been relatively quiet for the past four years.

Two short months ago, Joe Biden slithered his way into the US Presidency and this week, the quiet in Ukraine has been shattered.

The Ukrainian Armed Forces used 60-mm munitions and shelled Elenovka [a settlement in the DPR].   This woman, who lives in the DPR, found this exploded Mortar in her garden:

These mortars comply with NATO standards and are in service with the alliance countries. This is reported by the Joint Control and Coordination Commission of the DPR.

It is important to note that by shelling Elenovka, the government in Kiev hinders the work of the humanitarian missions of the International Committee of the Red Cross (ICRC) and the United Nations (UN).

The ICRC and the UN deliver humanitarian aid to the DPR and LPR just through the Elenovka checkpoint.

As was stated by the Ministry of Foreign Affairs of the DPR, Kiev warned representatives of the ICRC and the UN a few days ago that they would not be able to deliver their goods through Elenovka, due to the tense situation in the area.

At the same time, there were several years without attacks in the area of Elenovka until yesterday evening. Local residents conclude that the Ukrainian leadership is deliberately going to aggravate the situation in Donetsk People’s Republic.

Biden got into the US Presidency, and suddenly a war that was building in eastern Ukraine under Obama, but had stopped under Trump, is now starting again.

And the planning is already being carried out to escalate this into actual, hot, warfare, complete with Armor, artillery, and massive numbers of troops.   Military trains are already traveling through Ukraine, toward the Russian Border areas of Luhansk and Donetsk (DPR).  Here’s video from yesterday:

This is a gigantic signal from Russia that things are not going to go the way they went previously.  For the first time in  Donbass, the Russian #51U6 Kasta-2E1 radar station was officially captured on camera, in the open, on actual DPR territory, which they tried to disguise in a hurry by draping a Ukraine flag.

If you zoom-out using the MINUS sign on the map, you will see precisely where this radar is set up; well inside Ukraine, in the Luhansk/Donetsk border area, a very considerable distance from the vast Russia border.

The development of the Kasta 2E surveillance radars was initiated in the former Soviet Union. Its primary objective is to overcome deficiencies or to satisfy the demand in low-level surveillance.

The Kasta 2E2 system uses one antenna and consists of three vehicles:

Both radar types can be triggered with either equal or opposed phases. The both antenna types can optionally be mounted on a standard 50 m pylon. This arrangement causes a displacement of the radar horizon which in turn increases the detection altitude up to 6 km at a distance of 150 km.

This radar is not unmarked.  It is Russian military, complete with Russian flag painted on the sides, and official Russian Army markings.

Russia isn’t playing anonymous Little Green Men anymore, they’re now out in the open.  This is a blunt signal they intend to defend the DPR; by force of the Russian Army.

If the US and Europe try pulling the same stunts they have in the past, it will now mean direct war with Russia.

That, is what Joe Biden and his failed advisors are conjuring up.  Direct war with Russia.  In Europe . . . and as we saw yesterday with US Air Strikes in Syria, perhaps war with Russia in Syria too.

These developments are NOT being reported in the mass media within either the USA or Europe.   If war begins, it will arrive like a lightning strike and the general public in both the US and Europe will be caught completely unaware . . .

. . . and also unaware that it was their own governments that sparked the whole thing.

Get right with God, folks.  If this breaks out, it will get very bad, very fast . . . and it is OUR country that is to blame.