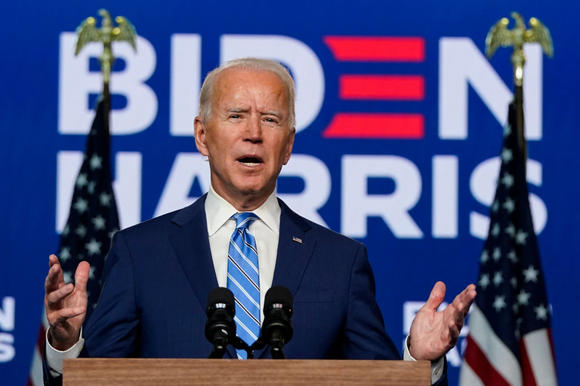 The campaign for Democratic nominee Joe Biden believes he has won the 2020 presidential election.

Jen O’Malley Dillon, Biden’s campaign manager, said Thursday, “Our data shows that Joe Biden will be the next president of the United States.”

Biden campaign manager @jomalleydillon: “Our data shows that Joe Biden will be the next president of the United States.”

Dillon added that the campaign is “confident” Biden will win Nevada and Pennsylvania, and the campaign said Biden had already won Arizona.

She said she expects NV total to fluctuate but that their data has VP up by 8. She expects NV to be called by today, which by AP’s count would put Biden at 270.

The Biden campaign view of the key states at the moment.

NEVADA: They expect to win, with it to be called today.

PENNSYLVANIA: Expects gap to narrow. They expect by end of the day they will win.

The campaign even added a note to its website, saying, “When all the votes are counted, Joe Biden will be the next President of the United States.”

Though Biden’s campaign feels the numbers are on its side, President Donald Trump’s campaign thinks it has the edge. Trump’s campaign suggested Wednesday that its data indicated the president was reelected, with Trump campaign manager Bill Stepien saying the team trusts “our data” and “our math.”

“We trust our data, we trust our math. It’s called the race spot-on until this point. That’s why we feel confident” about POTUS’ election chances — Trump campaign manager Bill Stepien says on call w/ reporters