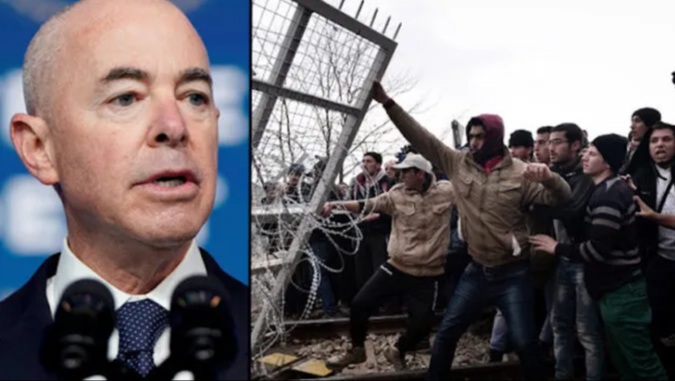 Joe Biden’s Department of Homeland Security (DHS) chief Alejandro Mayorkas has declared that his agency’s “highest priority” is to escort migrants “into this country safely.”

Mayorkas says DHS is making it their “priority” to reunite foreign nationals with family members, despite concerns about illegal immigration from taxpayers.

“We need … [to] develop a process where we can systemically bring them into this country safely and begin the healing process,” he claimed.

Breitbart.com reports: The media-magnified spotlight by Biden and Mayorkas on the migrant families “is distracting attention from their own responsibility for screwing up the border,” responded Mark Krikorian, the director of the Center for Immigration Studies.

It’s [Donald] Trump flagellation actually, because [the message that] “Trump is responsible for the evil of family separation” is the most emotionally potent message for Democrats …  They’re turning it into a defining issue [for immigraton policy] in a way that is simply not supported by the facts.

Mayorkas is trying to focus the public’s attention on the welfare of a few thousand Central American parents who brought their children to help them get through the border and get jobs in the United States.

But his deputies are allowing a growing number of foreign blue-collar workers to rush through the border and into the jobs needed by diverse Americans. Roughly 185,000 single economic migrants have run past Mayorkas’s diverted border agents since October, a source told Breitbart News.

Also, Mayorkas has adopted border rules that encourage many more foreign families to separate. Mayorkas’s rules allow migrants to enter the United States via the different side doors for children, teenagers, single adults, or families. Mayorkas’s separated inflow includes at least 30,000 separated children and teenagers who were brought to the border by hired coyotes.

In many cases, the migrants chose to leave their children behind as they were deported back home. Most of the children and teenagers were subsequently sent to live with relatives, including many of who are living illegally in the United States. With the help of cell phones, many of the migrants remain in contact with their left-behind children.

Our highest priority is to reunite these families. As we so powerfully saw, these are young people in their formative years. These are sometimes children as young as 3 years old. We are addressing the needs and vulnerabilities, not only of the children, but of course, their mothers, their fathers, the people that make up these families.

Our announcement of the reunification of four families is only the beginning, but it’s an important beginning to, in fact, publicize … Some [of the migrants’ children] live with immediate relatives, some with distant relatives, some are placed in foster care because they’re unaccompanied and they don’t have a sponsor in the United States … Some of these children are in their most formative years, their most formative stages of development, others are acutely vulnerable by reason of their incredible youth. Three years of age, at the time of separation, it’s extraordinarily cruel and inhumane.

“It’s not about righting the wrong of the past; it’s about restoring the conscience of our government,” said Mayorkas, who is now drafting regulations that will help migrants dodge the popular laws that require the deportation of migrant workers from Americans’ national labor market.

Since January 20, Biden and Mayorkas have discarded Trump’s pro-American, pro-family policies and have revived the long-standing extraction-migration policies supported by prior presidents.

These semi-legal policies extract migrants and consumers from Mexico, Central America, and other regions for use in the U.S. economy — regardless of the damage done to the migrants on their Hunger Games-style trek to the United States or to the economies and political development of migrant-sending countries, such as Honduras and Guatemala.

The personal impact of Mayorkas’s extraction-migration policies was described on April 30 by the Dallas News. The newspaper interviewed Carlos Joaquin, a Guatemalan migrant who has worked lower-wage jobs for 80-hours per week to pay off his debts to the coyote smugglers:

He’s at a breaking point. Torn to pieces, he said. “My family needs me,” he said recently over chicken tacos and a bottled Coke. “But my friends here tell me to hold on because the economy is about to boom; that I should just pay a coyote to bring my children and reunite with them because I may not be going home, not for a while.”

Joaquin arrived in March 2019, just before Trump overcame the establishment’s opposition and shut down the extraction-migration policy:

His two children back home in Guatemala, a boy and a girl, now live with his mother. His wife left him for another man after becoming lonely and depressed. He says she all but abandoned him and his children, and only reaches out to the family when she needs money.

“The hardest part is when I talk to my kids and they seem distant, sometimes rebellious, and treat me as though I’m a stranger,” Joaquin said. “They are becoming rebels without a father. Imagine what they think of me? Some stranger in some faraway land who claims to be their father, the one who broke his family apart and abandoned them.”

Joaquin’s 80 hours of work per week allowed him to pay off his smuggling debts and begin construction of a house in Guatemala.

But the pressure on him to work 80 hours per week also allows U.S companies to avoid hiring and training diverse Americans for decent jobs.

That cross-border difference creates a huge opportunity for U.S. employers to declare their independence from the blue-collar and white-collar Americans who want steady work, decent pay, weekends off, workplace protections, and some rights.

For example, former President George W. Bush described himself as a Mexican and scoffed at Americans’ expectations as mere “cultural tensions,” in an April 30 interview for the anti-Trump Despatch Podcast:

It became very apparent [on a 2000 campaign tour in Iowa] that immigration was going to create some cultural tensions—as those meatpacking plants up there in Iowa needed workers and, you know, the Swedes weren’t all that anxious to do it. And in comes [migrant] people who are starving to do the work, and hard workers, and all of a sudden those communities begin to change, and the culture, the friction. And, you know, I didn’t really realize that. I mean, after all, I grew up in Texas. Where we were Mexico.

In several interviews, Bush has claimed that business executives should be allowed to import compliant, grateful workers to work jobs at their estates and companies:

I’m a tree farmer, believe it or not. And you know, we’ve got eight Mexican [visa worker] laborers on our farm. And they, I think we’re in our third year with them working there. But every year, they have to reapply for a visa. So the way the rule works is you apply and you go through the bureaucracy, and then they have to go home for two months out of every year, which is fine, because they go home during the season where we’re not, you know, spending much time digging trees. And the question, though, can they get back in? Will the government let them in? And it creates a lot of uncertainty for a small business, because if the government at one point says no you can’t come back, all those years of training goes down the tubes. And so it sets us back.

But establishment reporters don’t call Mayorkas out for his duplicity, said Krikorian, because ” they’re part of the fakery.”

For many years, a wide variety of pollsters have shown deep and broad opposition to labor migration and the inflow of temporary contract workers into jobs sought by young U.S. graduates.

This opposition is multiracial, cross-sex, non-racist, class-based, intra-Democratic, rational, and recognizes the solidarity Americans owe to each other.

The voter opposition to elite-backed economic migration coexists with support for legal immigrants and some sympathy for illegal migrants. But only a minority of Americans — mostly leftists — embrace the many skewed polls and articles pushing the 1950’s corporate “Nation of Immigrants” claim.

The deep public opposition to labor migration is built on the widespread recognition that legal and illegal migration moves money away from most Americans’ pocketbooks and families. Migration moves money from employees to employers, from families to investors, from young to old, from children to their parents, from homebuyers to investors, from technology to stoop labor, from red states to blue states, and from the central states to the coastal states such as New York.