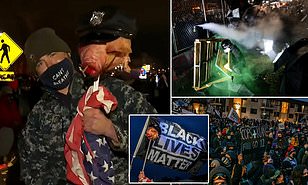 Black Lives Matter protesters brandishing a pigs head on a stake violently clashed with Minnesota cops on a fourth night of chaos Wednesday following the police shooting of a black man there days earlier.

Police had on Wednesday declared a protest in the city unlawful well before the 10pm curfew following clashes.

One protester – pictured holding a pig’s head in cop’s hat – told Sean Hannity Wednesday: ‘We don’t use tear gas. We don’t use gas.’ After it was pointed out that projectiles are ‘harmful’, the protestor added: ‘Of course, but that’s the only way they’re going to learn anything.

‘That’s the only way that things could ever change is if people start throwing things. The institution of policing is bad. There’s probably some really good folks…but they just have terrible jobs.’

Potter, 48, was on Wednesday charged with second-degree manslaughter – which carries a maximum penalty of 10 years in prison – for killing 20-year-old Wright. She posted $100,000 bond Wednesday evening and was released from the Hennepin County jail, online records showed.

She is scheduled to make her initial court appearance Thursday afternoon.

The demonstrator said of Potter making bond: ‘To me, that’s pretty much an outrage. I think that this lady essentially works for a occupying force here and she committed an act of war on somebody. I consider that an act of war. And she should not be out on bond. And it is not manslaughter. It is an act of war.’

The shooting death has ignited days of unrest and clashes between protesters and police.  In cities around the country – including New York City, Georgia and Philadelphia – protestors have taken to the streets.

A riot was declared in Portland on Tuesday after a police union building was set on fire. In Washington DC protesters chanted ‘burn the precinct to the ground’.

Shortly after 9 p.m., police announced over a loudspeaker that the protest was an unlawful assembly

A protester is helped following clashes with police Wednesday, the fourth night in a row demonstrators have taken to the streets

A protester is pictured on the floor during clashed with police Wednesday. A second demonstrator appears to be protecting her with an umbrella shield

Demonstrators gather outside of the Brooklyn Center police station on Wednesday. This is the fourth day of protests in the suburban Minneapolis city following the fatal shooting of 20-year-old Daunte Wright by police officer Kimberly Potter

Some officers could be seen spraying a chemical on protesters who formed a wall with umbrellas. Potter, 48, was on Wednesday charged with second-degree manslaughter – which carries a maximum penalty of 10 years in prison – for killing 20-year-old Wright. She posted $100,000 bond Wednesday evening and was released from the Hennepin County jail

The shooting death has ignited days of unrest and clashes between protesters and police. Demonstrators face off with sheriff deputies during a protest at the Brooklyn Center police station on Wednesday

Shortly before the dispersal order, some protesters threw objects at police, who responded with gas canisters

Brooklyn Center announced a curfew of 10 p.m. Wednesday — the fourth night in a row that the city has taken that action

Police say Wright was pulled over for expired tags on Sunday, but they sought to arrest him after discovering he had an outstanding warrant. The warrant was for his failure to appear in court on charges that he fled from officers and possessed a gun without a permit during an encounter with Minneapolis police in June

Wright family attorney Ben Crump said the family appreciates the criminal case, but he again disputed that the shooting was accidental, arguing that an experienced officer knows the difference between a Taser and a handgun