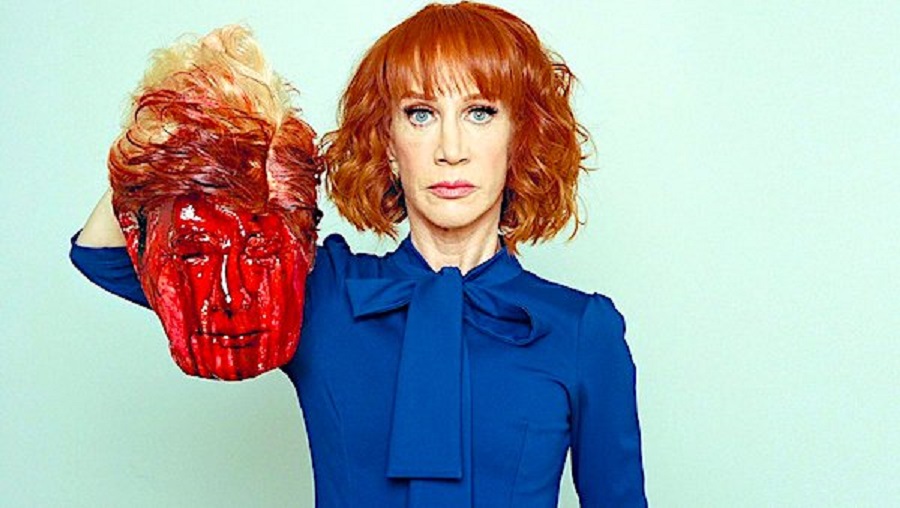 Actress Kathy Griffin reprised her gory stunt in response to Donald Trump’s election four years ago, retweeting the image of her holding a faked severed head of the president after he declared early Wednesday that Democrats were trying to steal the election.

She was fired by CNN for original tweet in 2017, the London Sun noted.

At the time, Trump called Griffin “sick” and said she should “be ashamed of herself.”

But on Wednesday, “The Daily Show” echoed Griffin’s reaction to the president on its Twitter account, suggesting Florida should be vaporized for voting for Trump.

Do we have this technology yet? pic.twitter.com/jjqKemqFtO

“Do we have this technology yet?” the tweet said, along with video of the “Star Wars” Death Star destroying a planet.

Hours before the vote, a Yale psychiatry professor who has concluded from afar that President Trump is mentally ill, insisting he and his supporters should be locked up, suggested Trump-supporting parts of the nation should be completely demolished.

Evoking the Allies’ leveling of Dresden, Germany, in World War II, Bandy X. Lee says leveling major cites may be the only way to remove the “spell” Trump has cast on his backers.

In a thread on Twitter, Lee recalled that a reporter related to her a conversation with his grandfather, who had fled Nazi Germany, regarding the bombing of Dresden.

“He said – I remember this well – that it was a necessity, because nothing short of the sight of SEEING THEIR CITIES LEVELED would have broken the spell,” Lee wrote. “The German public, he said, was not open to reason. They could not be persuaded to abandon Hitler.”

“Needless to say, we are seeing the same phenomenon here, and every day that Donald Trump has exposure to the public, he spellbinds his followers ever more deeply, as mental health experts are precisely the ones banned from comment,” she wrote.

“This is what the leaders of ‘The Resistance’ are fantasizing about if Trump loses – subjecting his supporters to Soviet-style show trials, Truth and Reconciliation commissions and Dresden 2.0!” the blog said.

“Past violence often leads to future violence, and we now have a person who has committed mass killings, recklessly endangering life, if not engaging in negligent homicide,” she said.

Salon pointed out that Lee was assuming that the 200,000 U.S. deaths attributed to the Wuhan coronavirus were because of “Trump’s negligence.”

Authoritarian regimes such as the Soviet Union fine-tuned the political weaponization of psychiatry, confining many dissidents of sound mind to insane asylums for “involuntary evaluations” because of their political opposition.

Lee also has claimed that the president’s supporters are unstable.