BREAKING: China calls on ALL their citizens to leave Ukraine immediately. 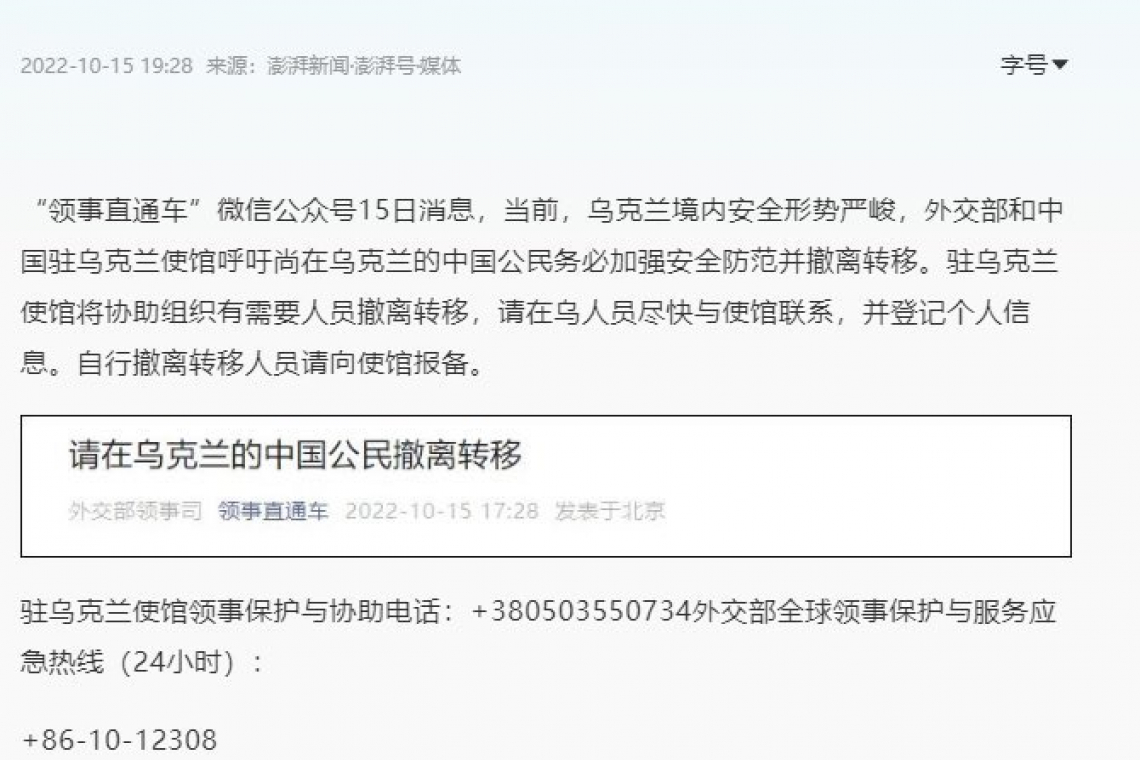 For the very first time since Russia began its “Special Military Operation” in Ukraine on February 24, the China Foreign Ministry has issued an URGENT Bulletin to all Chinese anywhere in Ukraine, to EVACUATE IMMEDIATELY.  *** UPDATE 8:30 PM EDT — MORE COUNTRIES WARN CITIZENS TO LEAVE IMMEDIATELY

This action by China is no doubt based upon information they derived from Russia thanks to the close relationship between those two countries.   It also bodes ominously for Ukraine.

What does China NOW KNOW about the immediate future of Ukraine, that they are choosing to URGENTLY tell their citizens to evacuate immediately?

They all seem to know something is up…

There has been very much speculation inside the USA that the Democrat Party knows it is going to be walloped in the upcoming Midterm elections in November.   Today being October 15, it seems to many Americans that whatever the Democrats plan to do, they HAVE to do before that date, if their goal is to somehow postpone the election.

Trouble is, the elections are not run by the federal government; they’re run by each of the fifty states.  Congress has zero authority to postpone elections.

Moreover, there is no provision within the US Constitution, permitting Congress to somehow EXTEND their term of office.   They cannot remain in power after January of 2023 no matter what law they pass.

Many believe firmly, however, the law and the Constitution won’t stop the Democrats from trying to cling to power by any means necessary.   If they start World War 3 next week, and the nukes fly, many suspect they would try to exploit that to their advantage.

Bear in mind, this nation held a Presidential Election during the Civil War.   Even an actual war, on our own soil, did not stop an election.  Keep that in mind.

Kazakhstan announced it is closing its Ukrainian Embassy immediately and all of its citizens should leave Ukraine at once.  Kyrgyzstan, Uzbekistan, Turkmenistan, and Serbia have told citizens to leave Ukraine as well . . .

One thought on “BREAKING: China calls on ALL their citizens to leave Ukraine immediately.”