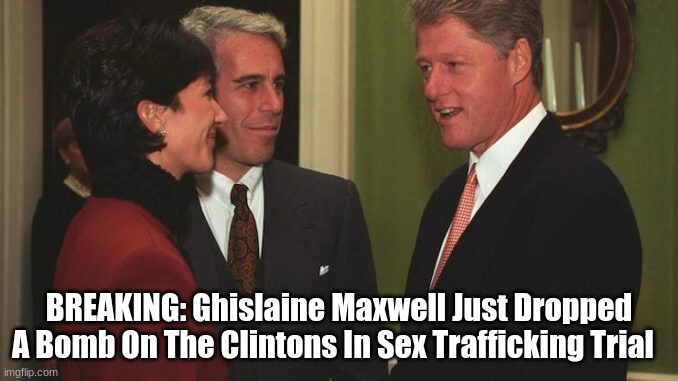 Ghislaine Maxwell, a child sex trafficker for Jeffrey Epstein, has audaciously come forth in court regarding her close ties to Bill and Hillary Clinton only days before she is sentenced for the crime.

In a 77-page court document, Maxwell directly accuses the Clintons of being involved in Jeffrey Epstein’s world and admits she helped “start and grow” the Clinton Global Initiative. She also claims she fears for her life in prison because snipers are allegedly waiting to assassinate her.

Maxwell appears to be using her relationship with the Clintons to negotiate a lighter punishment for her role in the trafficking of minors by Epstein and his influential VIP associates.

In a new court document submitted in advance of her June 28 sentence, Maxwell makes three references to her work on behalf of the Democrat former president’s charitable causes as she continues to argue that the four years in prison she is currently facing should be reduced from the 30.

Maxwell, 60, claimed that helping launch the Clinton Global Initiative (CGI) demonstrated she has a “desire to do good in the world.”

She will be sentenced next Monday after she was found guilty last December of trafficking and sexually abusing children.

Maxwell has asked to serve just four years and three months in jail when she is sentenced later this month – and claimed she is getting death threats in prison.

She also claimed that guards inside the prison where she is currently being held told her “there was concern she could be shot by a sniper.”

In her 77-page filing, it references Maxwell’s “history of philanthropy, charitable work, and helping others namely her work with the Clinton Global Initiative.”

“Her many educational, occupational, and avocational accomplishments include becoming an Emergency Medical Technician (EMT), a helicopter pilot, a submersible pilot, a banker; partnering with the Cleveland Clinic to establish a telemedicine platform to enable people in remote areas to obtain quality medical treatment; helping develop the Clinton Global Initiative; and supporting a variety non-profit and charitable organizations.”

In a later section, the document states that Maxwell is not an “heiress, villain, or vapid socialite.”

Her lawyer wrote: “She has energy, drive, commitment, a strong work ethic, and desire to do good in the world.

“She has supported friends and family through tough times and personal crisis and currently is assisting women in her unit at the MDC.

“She has endeavored to contribute to society….(by) helping launch the Clinton Global Initiative.”

The claim puts a renewed spotlight on the links between Maxwell, Epstein, and Clinton.

Epstein also claimed to have helped Clinton launch the CGI and the former president flew on his private jet – known as the “Lolita Express” – dozens of times.

One photo taken as the jet was about to depart shows Maxwell standing with Clinton on the plane’s steps, the two smiling warmly.

The friendship between Epstein, Clinton, and Maxwell dates back to the mid-1990s at least when they were all photographed together at the White House.

Clinton has denied any wrongdoing in relation to Epstein and said he never visited his private island in the Caribbean, known as “Pedophile Island” to authorities and locals, as some reports claimed.

Witnesses have said they have seen Bill Clinton on the island, however.

One thought on “BREAKING: Ghislaine Maxwell Just Dropped A Bomb On The Clintons In Sex Trafficking Trial (Video)”