BREAKING News Out Of TEXAS- They Are Actually DOING IT! 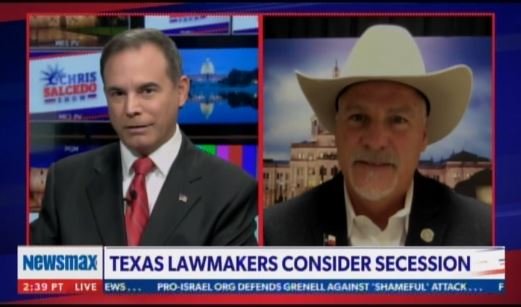 Some Texas lawmakers as well as lawmakers from other states are taking action against the incoming Communist/Democrat’s administration by taking steps to separate their states from the inevitable far left policies that the Biden and his radical left will be implementing.

In fact, they are proposing succeeding and establishing their status as an ‘independent nation.’

Most of America is against Communism, Marxism and Socialism.

The election was stolen and now America will be ruled by these scumbags.

Texas Rep. Kyle Biedermann joined Chris Salcedo on Newsmax TV on Monday. Kyle is leading an effort to save Texas from the Democrat Marxists who stole power in Washington DC in the 2020 election.

This is a good move by the Texas lawmakers before Democrats steal their state like they did the swing states in the 2020 election cycle.

“The federal government is out of control and does not represent the values of Texans. That is why I am committing to file legislation this session that will allow a referendum to give Texans a vote for the State of Texas to reassert its status as an independent nation,” Rep. Kyle Biedermann, R-Fredricksburg, said in a statement.

HELL YEAH! WE ARE NOT MARXIST SCUM LIKE OBAMA IS.

Biedermann said his bill will rely on Article 1 Section 2 of the Texas Constitution which reads: “All political power is inherent in the people, and all free governments are founded on their authority, and instituted for their benefit.”

The politicians in DC are out of touch w/ the voices of God fearing Americans and w/ the radical nature of the Democrat Party, it only renews my resolve to fight to give Texans the right to vote on #Texit. Join with me and sign my petition here: https://t.co/9fsTsz0FDL #txlege

“The faith of the people of Texas stands pledged to the preservation of a republican form of government, and, subject to this limitation only, they have at all times the inalienable right to alter, reform or abolish their government in such manner as they may think expedient.”

Since Communism is against the US Constitution it may be difficult for a court to rule against the “Texit” exit.