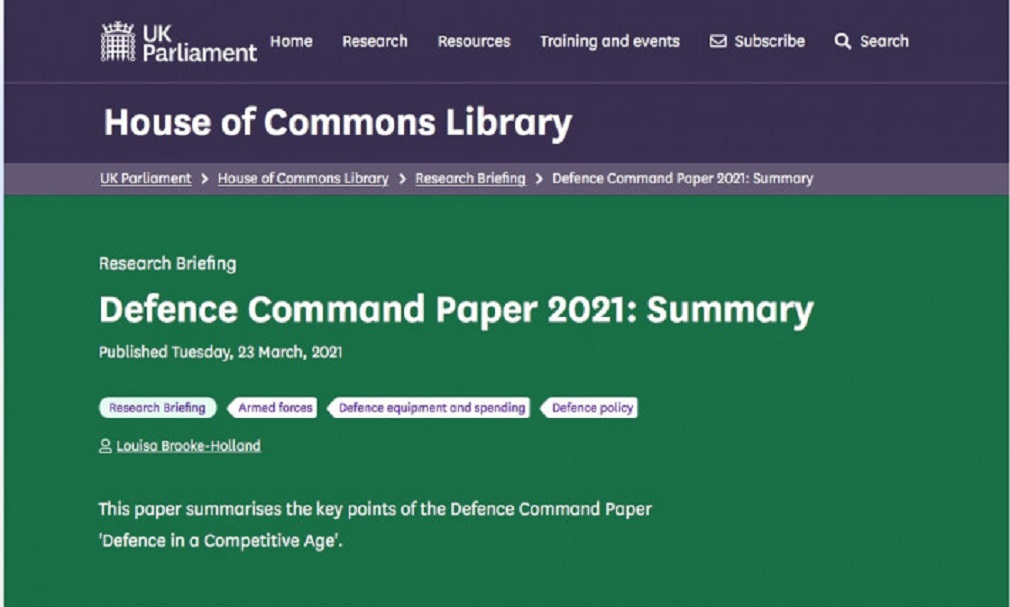 The U.K. Defence Command Paper, “Defence in a Competitive Age,” released by British Defense Secretary Ben Wallace yesterday as a follow-up to the defense, security, and foreign policy review released last week, focuses on the “21st century threats” that the U.K. supposedly faces in a world allegedly characterized by permanent confrontation.

“Those of us in government charged to protect and defend have a duty to enter new domains, as well as continuing investment in the traditional ones, but always adapting to the threat,” Wallace wrote in the foreword.

“History shows us, time and time again, that failing to do so risks irrelevance and defeat. As the threat changes we must change with it, remaining clear-eyed about what capabilities we retire, why we are doing so, and how they will be replaced.”

Therefore, the process for developing the new policy began with “assessing the threats we are encountering and anticipating, before considering how we should address them, and only then with which equipment, and what resources are required to field them.”

“We must actively champion those shared values of liberty, justice and tolerance that have given billions of souls the world over the chance of a better life, and do so through our actions, not just our words. U.K. diplomacy is underwritten by the credibility of the U.K. armed forces, and they will be more integrated, active and agile, capable of both deterring threats and defeating enemies,” Wallace declared.

This is all to be backed up by £188 billion in defense spending over the coming four years–an increase of £24 billion or 14%–which, Wallace claimed, “is an investment in that vision of security and prosperity in 2030.”

But the real axiomatic basis for what’s behind the new policy is this:

“The notion of war and peace as binary states has given way to a continuum of conflict, requiring us to prepare our forces for more persistent global engagement and constant campaigning, moving seamlessly from operating to war fighting.”

The armed forces “{will no longer be held as a force of last resort} [emphasis added], but become more present and active around the world, operating below the threshold of open conflict to uphold our values and secure our interests, partner our friends and enable our allies, whether they are in the Euro-Atlantic, the Indo-Pacific, or beyond.”

In other words, the United Kingdom will be in a permanent state of confrontation, if not always a shooting war, against Russia, China, and any other designated enemies who refuse to submit themselves to the “rules-based international order” dictated by the Anglo-American empire.