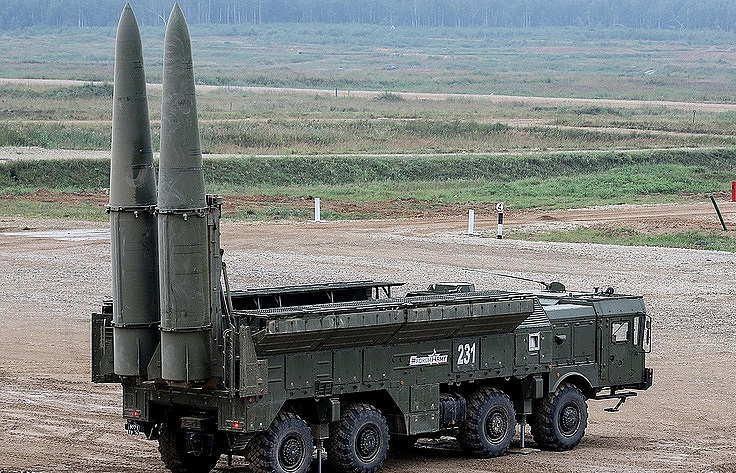 Earlier Sunday word “leaked” from British Intelligence that their Intelligence had “visually verified” Russian “Iskander-M” Tactical Nukes being brought to the Ukraine Border, for user BY RUSSIA in a “first strike” upon Ukraine.   NOW we have info this may be a FALSE FLAG NUKE ATTACK to be BLAMED on Russia!

The intelligence community was literally rocked on Sunday morning when “Intelligence” leaked from inside the UK, appeared in mass media outlets claiming they had visual verification of Russian Iskander-M missiles having been taken out of Russia’s Tactical Nuclear Storage and shipped toward the Ukraine border.

No one in the Intelligence Community had any whiff of such “intel” prior to it appearing in media – which is unheard of in actual reality.  Information moves at the speed of light within intel circles, but THIS did not.  It simply appeared in mass media as a “leak.”

Regular readers of this web site know that I have a long background in the Intelligence Community, having worked with the FBI from 1993-2008, by final five years (2003-2008) with the Joint Terrorism Task Force wherein I handled “National Security Intelligence, Terrorism, and Foreign Counter-Intelligence.”  All this was testified-to in Brooklyn federal court in December 2009 by then Assistant Special Agent in Charge, Amy Pickett, of FBI’s New York City Division.

She went on to tell the court that what I did “was so important, it couldn’t be handled by an FBI Field Office, it had to be handled through FBI Headquarters in Washington.”  And it was the Office of Intelligence, at FBI Headquarters in Washington, that granted me “Extra-territorial operating authority” so I could do what needed doing not only inside the US, but also overseas.   When I was tasked overseas, my work was coordinated with the CIA and other federal agencies, but I did not work for the CIA.

When I tell you about what’s floating around the Intel Community – I know – because I get it from that community and my former colleagues.

So when the claims by British Intel were reported in media before even seeping into the rest of the Intel community, it raised instant suspicion. A whole slew of other intel assets around the world began looking very hard into this because this did not make sense.

It was reported in British media that:

Western intelligence sources reported sighting the transfer of an Iskander-M brigade from the Russian army’s tactical nuclear facilities to Ukraine. They are speculating that this weapon is meant to serve as a first strike if Russia goes through with an invasion.

It is common knowledge that Russia is vastly superior to Ukraine in military equipment, training, discipline, technology, and personnel.  There is absolutely no need whatsoever for Russia to even consider a tactical nuke, never mind take several out of storage, and move them toward Ukraine.   The whole notion is ridiculous from a military standpoint.

But if one was considering launching a FALSE FLAG NUKE ATTACK using a tactical nuclear weapon, and then BLAMING IT on Russia, then this “leak” makes all the sense in the world.  They put the “narrative” out to the media to get people “primed” to think this way.  Then, when it happens, the public reaction would likely be: Holy Shit, Russia used nukes!

Think about the reaction to news, blazing headlines, endless TV coverage around the world, all blaming those “beastly Russians” for using a nuke. Oh, and you just KNOW there would happen to be about 100 different camera angles all clearly showing the blast.  The world would recoil in absolute horror.  The anger and rage would be instant, and long lasting.  It would be a global green light to do WHATEVER they wanted to Russia and nobody would care.

Quite convenient for NATO which is rapidly losing the information war because the actual truth is coming out all over the planet.  All of the facts about how the EU and USA overthrew Ukraine’s government in 2014 . . and how this latest nonsense is all a resumption of that earlier effort . . .  would be wiped away by a  single blast from a tactical nuke.

Now, one must bear in mind that British Intelligence and their military Officer Corps is full of child molesters and other deviants, right up to Prince Andrew, whose kid sex troubles are now all over media covering him being sued in US Courts by one of his alleged child victims.  A fish rots from the head.  So deviancy to the extreme is quite common in British military and intelligence circles.  Their intel and military officer corps are literally infested with such child buggers.

When people are so deviant that they not only CONSIDER sexing a child, but actually DO IT, then you have to realize these people are also capable of other horrifying behavior.  Would it rise to the level of a false flag NUKE to start a war?   To date, no.  But who really knows?

Bear in mind it has been the British pushing this Ukraine thing all last year into this year. It started in March 2021 with a Tweet from the British Ambassador just two short months into the new “Presidency” of Joe Biden in the USA:

This official statement came out of nowhere. There was no talk of this subject anywhere.  Then, the British stirred the pot.

It was also the British who pushed the Ukraine thing all the way back to 2013 & 2014 when the EU and USA fomented riots that overthrew the Ukraine government.

It was British Intelligence that spied on candidate-then-President Trump.  It was a “former” British Intel guy who created the so-called “Pee Pee Dossier.”

So the British are demonstrably neck deep into causing all sorts of trouble on many levels, in many places.  What if they’re back at it again – this time with the penultimate False Flag, a staged tactical nuke attack in Ukraine, to be BLAMED on Russia, thereby unleashing a massive (possibly nuclear) war?

Oh, and one more thing: Biden is “in on it.”  For the past few weeks, Biden himself has repeatedly stated publicly “there must not be a nuclear war” and after he started saying that, all the nuclear powers came out with a reaffirmation against such a war – even though no one asked them to. No one even mentioned nuclear war.   Yet the words were put out there.  Looking back, it now seems clear Biden himself knew of this plan and began setting the narrative weeks ago.

One also must recognize that Biden himself has a long track record of “sniffing” children . . . and was accused of sexing a relative when she was young too.  So if these allegations are true, the whole child sex thing might apply to HIM as well.

When you have people who are so sick they screw children; create Pee Dossiers out of thin air, make such allegations publicly, and deliberately hide that they were the source, what else are such people willing to do?

If a Tactical nuke goes off in or near Ukraine and is blamed on Russia, think long and hard about what you believe because the BRITISH are neck deep in troublemaking and it is from THEM that this initial “leak” of so-called “visual verification” of Iskander-M tactical nukes toward Ukraine originated.

This “intel” stinks to the high Heavens and it comes from the rotting corpse of a British Empire, long bereft of Lordship.

One thought on “British “Intel” Claims Russian “Iskander-M” Nuke Sent Toward Ukraine for First Strike; But New Fear that British to use Nuke in “False-Flag” and BLAME RUSSIA”