Brute On Bike Punches 60-Year-Old Woman In Brooklyn, 4 Firefighters Make Him Regret It 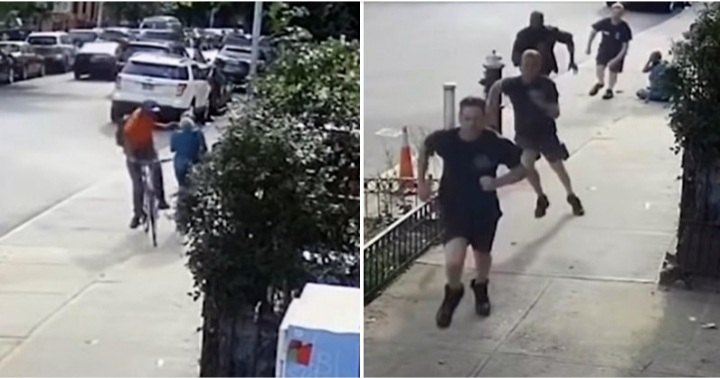 The dramatic moment a brute on a bicycle punched an unsuspecting 60-year-old woman in the face was captured on surveillance video. More shocking than the unprovoked attack, however, is what four firefighters who witnessed the assault decided to do about it, and that was all caught on camera too.

Daniel Biggs, a 53-year-old New York man who’s no stranger to police, launched an unprovoked attack while riding his bike in the Bedford-Stuyvesant section of Brooklyn on a Wednesday evening. Biggs made one huge miscalculation, however, when he decided to punch an unsuspecting 60-year-old woman in the face. Not only was he on camera, but he was also in front of a fire station — and firefighters were watching.

As seen in footage captured by a surveillance camera, a 60-year-old woman in a blue shirt was walking down Hancock Street at approximately 5 pm when a man, later identified by New York Police Department as Daniel Biggs, approached her while riding a bicycle from the opposite direction, the Daily Mail reported.

Daniel Biggs punches an unsuspecting 60-year-old woman in the face.

After being seen swerving onto the sidewalk, Biggs is captured reaching out his left arm and landing a punch to the woman’s face as he rode past her. The blow knocked the victim, who suffered a cut to her mouth, backward onto the pavement. Following the unprovoked attack, Biggs continued to ride along the sidewalk, speeding off on his bike and likely thinking he would get away with his crime. He was wrong.

The incident took place just feet from the front of the FDNY’s 214/Ladder 111 fire station, and firefighters were watching. Within seconds, four firemen, who witnessed the attack, emerged from the station. They were not about to let Biggs get away with the violent assault. Instead, they gave chase and quickly made Biggs regret what he had done while others checked on the 60-year-old victim.

As seen in the dramatic footage, four hero firefighters immediately responded to the attack, chasing down Daniel Biggs on his bike just seconds after the assault. Biggs turned left at the corner of Hancock and Lewis Avenue, but any hopes of escaping were quickly brought to a halt as the four firemen caught up with him.

As the firefighters surrounded the suspect and wrestled him to the ground, a scuffle ensued, and Biggs punched a 29-year-old fireman in the eye, causing bruising and swelling. Even though he put up a fight, the suspect was easily pinned down and held by firefighters until the police arrived and arrested him.

Four heroic firefighters immediately give chase after Daniel Biggs punched a woman in front of the fire station.

Daniel Biggs was hauled away in handcuffs by officers with the NYPD as a crowd watched, but this wasn’t the first time he found himself on the wrong side of the law. Biggs has 18 prior arrests, including charges that range from robbery to assault. Only 24 days before this unprovoked sidewalk attack, Biggs allegedly slashed a 26-year-old man in the face.

Although the woman suffered a cut to her mouth, she declined medical attention at the scene, according to police. They also said the victim and Biggs were strangers as investigators attempted to determine a motive for the attack, which was unclear.

The heroic firefighters caught up with Daniel Biggs and took him down.

“It’s bad. You can’t hit a woman. She’s very nice, the whole family. I grew up with them, and they very nice,” said Twin Alzokari of the nearby J&A Deli and Grocery, who watched the FDNY jump into action after the assault. “I just see the guy running with the bike and I see the fire department came after him,” Alzokari recalled.

Alzokari added that he and his neighbors are grateful for the firefighters’ bravery, according to CBS Local. “You feel safe. They’re always helping the community, and that’s a very, very good job what they did,” he said, and we couldn’t agree more. These brave men didn’t have to put themselves in potential danger, but they did it anyway, in hopes of making their community a little safer. That’s commendable and deserves to be recognized and applauded.