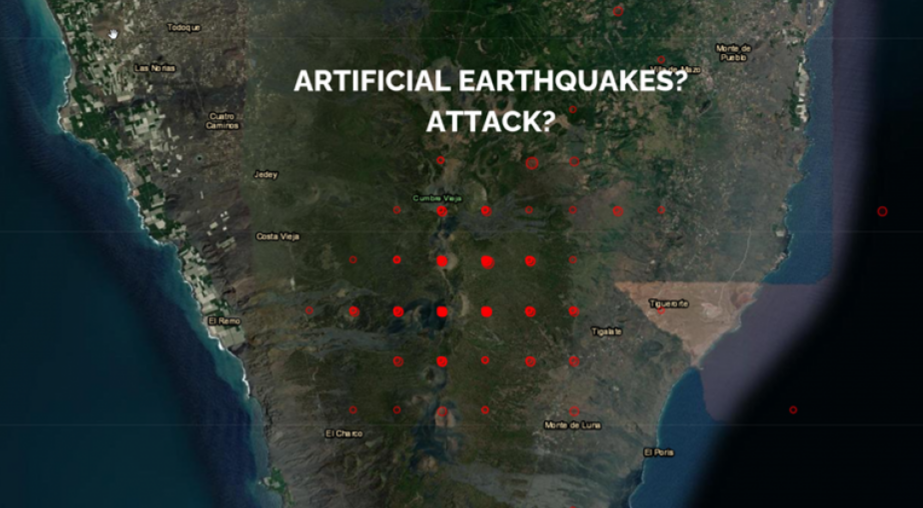 The volcanic eruption which began on the Island of LaPalma in the Canary Islands, Atlantic Ocean, off the northwest coast of Africa seems to be getting some help: artificial help to make it WORSE!  Evidence below:

When the Cumbre Viejo volcano on La Palma began erupting on September 10, it immediately became the focus of intense attention because that island is the only place in the world which can generate a Tsunami wave, which is capable of literally destroying the entire east coast of North America.

Back in the 1990’s several scientists closely studied and even went inside the then-dormant volcano and found that the entire southwest flank had become unstable and could slide into the Atlantic Ocean.  That unstable land mass is the size of the island of Manhattan, NYC, and would generate a tsunami wave.

Computer models showed the tsunami would begin hitting the US east coast within 7 to 8 hours, and would smash almost all the major cities, with a wall of water 30 meters to fifty meters high.  That would mean a wave 100-164 FEET tall, lasting 5 to 45 minutes as it flooded 12-15 miles inland.

As interest in the eruption grew, people starting paying closer attention to what was taking place there.

Tonight, that attention has paid off.

The European-Mediterranean Seismological Centre (EMSC) was founded in 1975, following a recommendation from the European Seismological Commission (ESC). The ESC is a regional commission of the International Association of Seismology and Physics of the Earth’s Interior (IASPEI), itself a specialized association of the International Union of Geodesy and Geophysics (IUGG).  Put simply, it is Europe’s equivalent to the US Geological Survey in the USA.

Tonight, if someone goes to the EMSC web site to look at earthquakes taking place on the island of LaPalma, they get a map showing this:

The red dots forming a blob of red indicates the ongoing clusters of earthquakes around the erupting volcano.

If you zoom-in a little closer on the same earthquake map,  you see this:

But watch what happens when you zoom-in really close:

That’s almost a perfect grid pattern.   There is no way that’s natural.  No possible way at all.

It looks as though LaPalma is being attacked.  It appears some type of technology is being used to specifically target the island and CAUSE earthquakes, and the attack pattern indicates it is intended to deliberately weaken the same southwest flank where the unstable land mass is located.

THERE ARE EVEN PRECISE SECONDARY EARTHQUAKES IN THE PRECISE LOCATION OF EARLIER EARTHQUAKES!

This appears to be a deliberate effort to CAUSE the flank to slide into the ocean and generate a tsunami to wipe out the US east coast.

Whoever is doing this appears to be TRYING to cause the destruction of the US east coast.   This may be an actual act of war!

Unless, of course, it’s the US Government doing it, to cause a calamity which wipes out a slew of people who would no longer be able to claim welfare, Medicare or Medicaid? Think of how many people on the east coast, who have paid into Social Security for years, wouldn’t be alive to claim any benefits!  Big savings for the US government!

Even more enticing for some of the government control freaks, it would be the perfect excuse to implement nationwide Martial Law when all the big bank headquarters got demolished, and the business capital of the country was destroyed, allowing the government to justify their takeover of  . . .  everything.

Or how about this: The tsunami happens, it kills the estimated 65 million that FEMA thinks could die in such a cataclysm, so the government goes to the bankers and says, the country is wrecked, we have no hope at all of paying our $28 TRILLION national debt; we need debt forgiveness . . . . and they get the slate wiped clean so they can start the whole shebang all over again!

Whatever is going on on La Palma, may have begun naturally, but as of 11:45 PM eastern US time on Friday, October 22, 2021, it now clearly looks as though some type of man-made attack is taking place.

It LOOKS like somebody wants a lot of Americans dead.

Here is a DIRECT LINK to the EMSC Earthquake map.  You can verify these findings yourself by going to LaPalma, then zooming in.