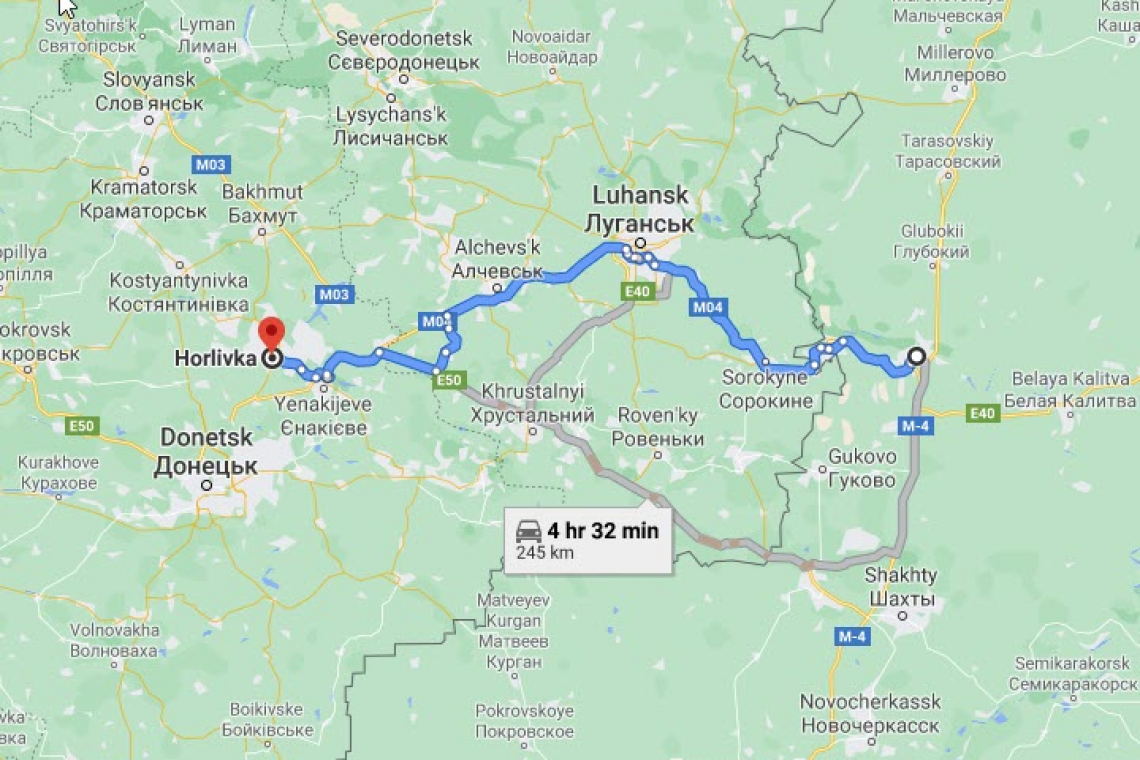 FLASH TRAFFIC on Intelligence Circuits now confirms tanks have crossed the border!  This is now out in the open; it’s actually happening . . . .

1:39 PM EDT, Sunday, 21 March 2021 — Four hours ago, Tanks from the Russian Army began crossing the border from Russia into Ukraine.  VIDEO of the tanks on the move is included in the Premium Content area below!

Those tanks were INVITED in by the governing body of breakaway oblasts (states) of Donetsk and Luhansk, to protect the people there from Ukraine government troops, massed on the western borders of those two states.

The people of Luhansk and Donetsk want to leave Ukraine and become part of Russia. Ukraine says “no.”

Over the past two weeks, Ukraine has built up its armed forces on the western border of those two oblasts (states) to take them back by force.

With the entry of Russian Army tanks today, it is now explicitly clear that Russia itself will militarily engage any troops trying to attack Luhansk and Donetsk.  For its part, Ukraine intends to use force and NATO has oh-so-coincidentally begun military drills in the Black Sea and the countries surrounding Ukraine . . . . and just-so-happens to be in the exact spot needed to engage Russia when the fighting begins.

Explicit details of the entry point, and the territories Russia “will” take if war breaks out, appears below:

The entry of Russian Army took place from Kamensk-Shaktinsky, Russia, and in the time since then, those tanks have traveled about 225km to Horlivka, (Donetsk) Ukraine.

Video showing the Russian tanks on the streets of Horlivka appears below:

If Ukraine is foolish enough to commence attack against Luhansk and Donetsk (they are that foolish) Russia will violently counter-attack.  The insertion of Russian Army tanks now makes that clear.

From inside Russian military sources, I have received information about specific territories within Ukraine that Russia will seize.  I am working to CONFIRM this information because what I’ve been told is so stunning, it needs verification before I print it.

I expect to have confirmation within the hour.  Check back after 3:15 PM eastern US time for the expected update.

Former military say that if Ukraine starts a war, it will lose 3 territories; Kharkiv, Zaporozhye and Odessa.

This was reported by sources in Donetsk and Luhansk who took part in previous hostilities.

Rostislav Zhuravlev reports that in Kharkov 80% are Russians.

Alexander Grigorenko says that in other cities of Eastern Ukraine, there are pro-Russian sentiments.

This is the whole region of southeastern Ukraine with the exception of Dnipropetrovsk.

According to sources in a position to actually know, Ukraine has deployed 90,000 troops, 450 tanks, 300 armored vehicles, and 800 artillery batteries in the Donbass . . . . the region composed of Luhansk and Donetsk.   3:41 PM EDT UPDATE: Ukraine buildup by Donbass by the numbers. 90,000 Soldiers, 450 Tanks, 230 series launch jet artillery systems (BM-21 Grad), 800 artillery of all kinds, 300 amphibious infantry fighting vehicles, and armored vehicles, more than 100 Aircraft.

Rapid developments in Russia as the country’s Minister of Defense, S. Shoigu, ordered the mobilization of the Russian Navy Fleet in the Mediterranean, Black Sea, Caspian and Baltic, while Russian amphibians sailed and headed to the Black Sea.

British Troops in their Special Air Services (SAS) have been relocated from Romania into Ukraine!

The Special Air Service (SAS) is a special forces unit of the British Army. The SAS was founded in 1941 as a regiment, and later reconstituted as a corps in 1950. The unit specialises in a number of roles including counter-terrorism, hostage rescue, direct action and covert reconnaissance.