Candace Owens Blasts BLM Founder: ‘If White People Are so Bad, Why Doesn’t She Want to Live Amongst Black People?’ 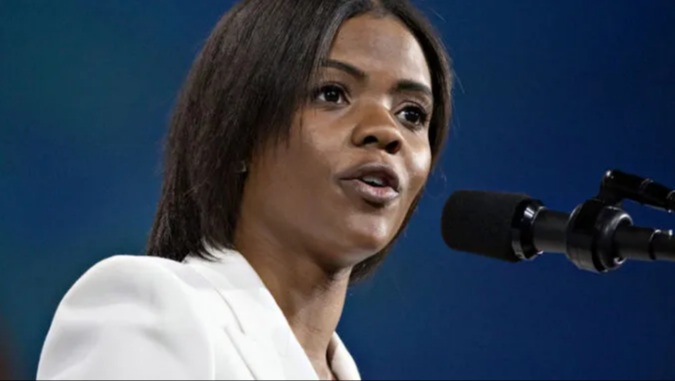 Conservative host Candace Owens blasted Patrisse Khan-Cullors, one of the founders of Black Lives Matter (BLM), pointing out the irony of her advocacy while living in a mostly white neighborhood.

Owens questioned why Khan-Cullors is purchasing lavish homes in white neighborhoods, while publicly calling them “oppressors” during BLM protests.

The conservative author and host told Fox News’ Tucker Carlson that over $25 million dollars raised by the BLM movement was directed toward “building a black movement.”

“Apparently, the ‘black movement’ was Patrisse moving herself, a black woman, into other areas of the communities of people that she claims are oppressing black Americans,” Owens said.

“Why doesn’t she want to live amongst black people?” she asked.

“Why is she choosing to move herself into an all-white neighborhood? These are important questions.”

Thegatewaypundit.com reports: The New York Post reported that Khan-Cullors is on a “real-estate buying binge” — purchasing “four homes with a price tag totaling upwards of $3 million.”

It said one of the homes that the BLM founder purchased for $1.4 million was located in a “secluded area of Los Angeles,” where the black population is reportedly less than 2%.

“A secluded mini-compound tucked into L.A.’s rustic and semi-remote Topanga Canyon was recently sold for a tad more than $1.4 million to a corporate entity that public records show is controlled by Patrisse Khan-Cullors, 37-year-old social justice visionary and co-founder of the galvanizing and, for some, controversial Black Lives Matter movement,” a report from dirt.com said.

Khan-Cullors, a self-described Marxist, was also reportedly eyeing a spot in an “ultra-exclusive” resort in the Bahamas, where Hollywood celebrities like Justin Timberlake and Tiger Woods maintain homes.

The Post wrote that “luxury apartments and townhouses at the beachfront Albany resort outside Nassau are priced between $5 million and $20 million according to a local agent.”

The Black Republican, who was also co-founder of the BLEXIT movement, mocked Khan-Cullors for staying true to her “communist” values of “steal[ing] and enrich[ing] themselves.”

“She has my respect because she’s unapologetic in her approach. She’s telling you what she is. She’s a Marxist. So Marxists steal money from other people and they enrich themselves until the people that they stole from are poor. And so she has stolen money from other people on the pretext of a lie that is Black Lives Matter,” Owens said.

“I mean, you have to kind of appreciate the honesty; she’s not hiding by any means, you know. … She’s a communist through and through, and she’s been unbelievably unapologetic in her approach.”

While it is unclear if Khan-Cullors has done anything questionable related to the BLM funds — which reportedly raked in more than $90 million in 2020 alone — her actions prompted the head of BLM Greater New York City, Hawk Newsome, to call for “an independent investigation” to find out how the organization is spending its funds.

During the height of the  BLM protests in 2020, Khan-Cullors and spouse Janaya Khan also reportedly bought a 3.2 rural acres “custom ranch” in Conyers, Georgia. The activist was also said to have paid $510,000 for a three-bedroom home in Inglewood, California, and another $590,000 for a four-bedroom home in South LA.

“If you go around calling yourself a socialist, you have to ask how much of her own personal money is going to charitable causes,” Newsome said.

“It’s really sad because it makes people doubt the validity of the movement and overlook the fact that it’s the people that carry this movement.”

Aside from the investigation, Khan-Cullors is also under fire for her real-estate buying spree.

“She had a lot of options on where to live. She chose one of the whitest places in California. She’ll have her pick of white cops and white people to complain about. That’s a choice, bro,” a Twitter user said.

Khan-Cullors co-founded the BLM movement in 2013 together with Alicia Garza and Opal Tometi. The group has reportedly been “demanding $20 million from the Black Lives Matter Global Network Foundation.”