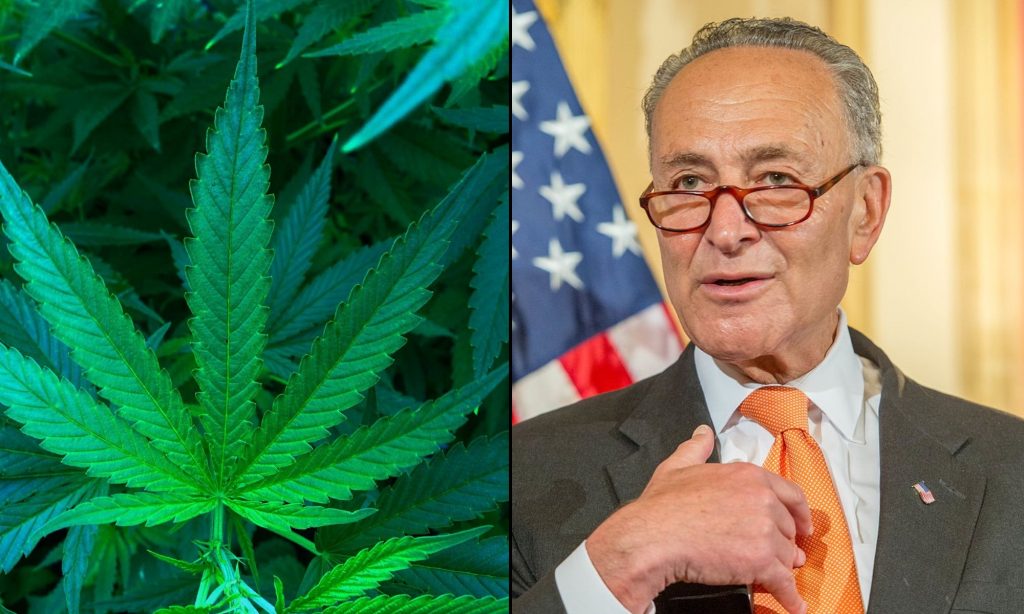 Newly installed Senate Majority Leader Chuck Schumer (D-NY) reiterated on Monday that marijuana reform will be a legislative priority for his chamber as the session ramps up.

In his first public comments on cannabis policy since Democrats reclaimed the majority and put him in the top leadership position, Schumer said federal marijuana reform will be part of a racial justice agenda that lawmakers will pursue in the 117th Congress. It’s a signal to advocates that the senator’s pre-election commitments to advancing legalization were not simply political bluster.

Schumer said that when it comes to marijuana reform, the issue intersects with both racial and economic justice.

“A young man is arrested with a small amount of marijuana in his pocket. He has a criminal record the rest of his life, can’t become a productive citizen—this one won’t hire him, that won’t hire him. Change that,” he told MSNBC’s Rachel Maddow. “There’s lots to do, and we have to succeed.”

The comments came in response to Maddow’s prompt to list his top legislative priorities for the new year. He first listed climate change, then included cannabis in a riff about economic and racial inequality and concluded by discussing democracy and election reform.

“Those are the three stools,” he said.

While Schumer stopped short of explicitly calling for legalization in the new interview, the majority leader has previously made clear he is committed to advancing the far-reaching reform under a Democratic majority.

He said in October that he would move to put his cannabis descheduling bill on the floor if Democrats secured enough seats to put him at the helm of the Senate, resigning anti-legalization Sen. Mitch McConnell (R-KY) to the minority leadership position.

“I’m a big fighter for racial justice, and the marijuana laws have been one of the biggest examples of racial injustice, and so to change them makes sense,” he said at the time. “And that fits in with all of the movement now to bring equality in the policing, in economics and in everything else. Our bill is, in a certain sense, at the nexus of racial justice, individual freedom and states’ rights.”

The senator has become a strong ally for comprehensive cannabis reform. In 2019, for example, he sided with reform advocates who argued that passing a bill to protect banks that service the marijuana industry was not enough.

Now with Democrats in control, advocates and lawmakers are preparing for a deluge in marijuana reform proposals that could see floor action and make their way to President Biden’s desk. That includes a bill to federally legalize cannabis and promote social equity that the House passed last year.

Already in 2021, two congressional marijuana bills have been filed: one to move cannabis from Schedule I to Schedule III of the Controlled Substances Act and another to prevent the U.S. Department of Veterans Affairs from denying veterans benefits solely because they use medical marijuana in compliance with state law.

Those more modest measures would likely advance without controversy if leadership decided to take them up, but it remains to be seen what Biden would do if a piece of comprehensive legalization legislation landed on his desk.

The president is in favor of decriminalizing marijuana possession, legalizing medical cannabis reform, minor federal rescheduling, expunging prior records and letting states set their own policies without federal intervention—but he remains opposed to adult-use legalization, despite supermajority support for the policy within his party.

In any case, Schumer’s latest comments seem to bode well for the prospects of meaningful legislative action on cannabis reform, regardless of where Biden falls on the specifics of the proposals.

Other positive signs from activists’ perspective include Biden’s recent appointments of several pro-reform officials who could each play a role in shaping federal policy.

His pick for another leading role in HHS, Rachel Levine, is also a strong ally of the medical marijuana community. And the Biden transition team isn’t shying away from her connection to medical cannabis, noting her work on the topic as a top Pennsylvania official in an announcement earlier this month.

He announced earlier this month that he wants Rhode Island Gov. Gina Raimondo (D) to run the Commerce Department. The governor, whose confirmation hearing started on Tuesday, came out in support of legalization in 2019, and she released a budget proposal last year that called for a state-run regulatory model for cannabis.

For attorney general, Biden is nominating Judge Merrick Garland, who has not been especially outspoken about his views on marijuana policy. While advocates expressed concern about his commentary in a 2012 federal appeals case on marijuana scheduling, he doesn’t appear to have been publicly hostile to a policy change.