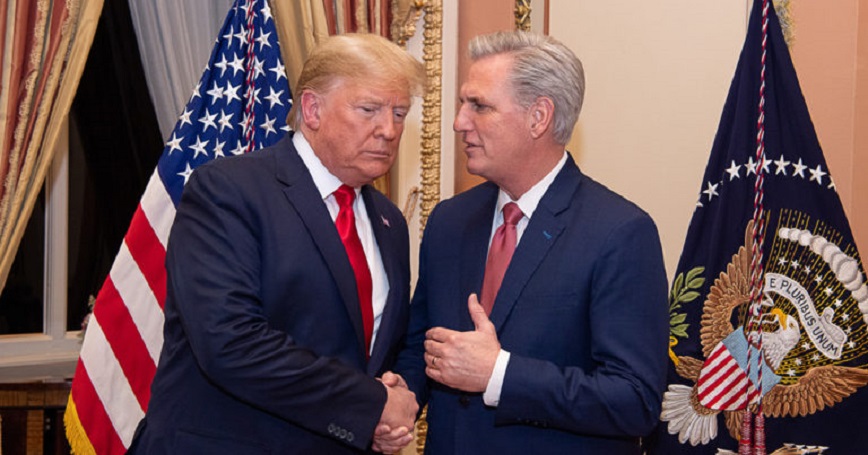 The Republican Minority Leader may be working with Pelosi to stop the January 6 Electoral College challenge.

GOP Minority Leader Kevin McCarthy is in negotiations with Democrat House Speaker Nancy Pelosi to block the reported 140+ representatives and a dozen senators who have publicly announced their intentions to object to controversial slates of electors submitted from contested states with credible accusations of widespread voter fraud.

Our sources explain that a McCarthy and Pelosi effort to stymie the grassroots-led effort to pursue a transparent 2020 election would mark a decided break from the populist flavored politics of the last four years back toward the bi-partisan days of back room deals, horse trading, and pay-to-play lobbying D.C. is so famous for.

National File’s sources also note that Vice President Mike Pence, as the presiding officer of the joint session of Congress scheduled for January 6, would almost certainly be informed of this effort.

The move would be designed to stop a potential contingent election in the House of Representatives. If the Republican-led Senate and Pence were to refuse to accept Electoral College votes from states with credible accusations of widespread voter fraud, and neither President Donald Trump nor Joe Biden receive the requisite 270 electoral votes, a contingent election would be required in the House of Representatives.

In an email to National File, McCarthy’s office explicitly denied that he is working to block this, contradicting multiple senior Congressional staff members who spoke to National File.

Since the election, McCarthy has been an unreliable ally of the President’s at best. In November, shortly after the election was contested by President Donald Trump, McCarthy caved to corporate media pressure after initially declaring President Trump the victor of the 2020 election.

McCarthy later claimed that he did not declare President Trump the winner of the 2020 election at all, “but rather was crediting the president with Republican wins in House races.”

Though the McCarthy may have appeared to be close to President Trump through the 2020 election, McCarthy loudly repudiated President Trump’s effort to withdraw troops from Syria in late 2019.

Additionally, in 2016, McCarthy privately commented that President Trump was one of two Republican politicians on the Russian payroll, and specifically said that he believes President Trump was funded by Russian President Vladimir Putin, calling into question McCarthy’s multiple public assurances that he is working on behalf of President Trump. He later claimed he made the comment in jest after it was reported by The New York Times.