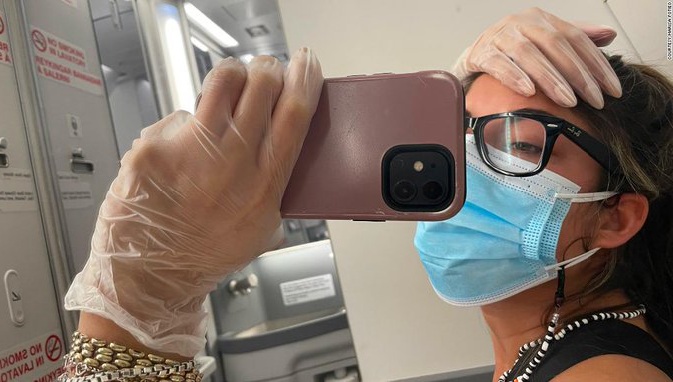 The below CNN story appropriately ran on December 31st, marking the end of a tumultuous 2021 dubbed by many headlines to be “the year of the coronavirus vaccine”. It was also a year of general Covid lunacy as people’s faith in the public “science and health experts” began to wane, but also as true believers in the dogma of “trust the science” refused to allow an inkling of doubt, even as highly vaxxed populations saw numbers of cases soar.

“Chicago woman quarantined in airplane bathroom for 3 hours after testing positive for Covid-19 mid-flight” – the CNN headline reads. She locked herself in the bathroom while en route from Chicago to Reykjavik, Iceland (she planned to go on to visit family in Switzerland) – after panicking upon discovering that a sore throat was the onset of coronavirus. CNN seems to actually hail her as some kind of hero of public conscientiousness. The start of the story perfectly encapsulates the kind of neurosis and failed precautions and anxiety-inducing “health rituals” which have taken hold over vast segments of the population. The woman took no less than seven Covid tests just before the flight:

“The wheels started turning in my brain and I thought, ‘OK, I’m going to just go take a test.’ It was going to make me feel better,” Fotieo told CNN. “Immediately, it came back positive.”

This story should be in The Onion. This woman, triple vaxxed, wears masks and shields, tests obsessively. Tested positive while mid-air (she’s hoarding tests) and locks herself in an airplane bathroom for hours fearing she’s killing everyone and herself. https://t.co/AeaaUEO9nq

And here’s the kicker: the woman who gave herself seven Covid tests but learned on the 8th that she had the virus was fully vaccinated and had received the booster.

But CNN still reminds the reader that it’s the “unvaccinated population” that we have to worry about here:

Fotieo, who is fully vaccinated and has received the booster, is an early childhood teacher in Chicago. She tests consistently since she works with an unvaccinated population.

When she got her results in the airplane bathroom, over the Atlantic Ocean, she said she started to panic.

Upon leaving the bathroom and the airplane when the flight touched down in Iceland, she was administered two more Covid tests, which both came back positive. So within a short span, that makes ten total Covid tests.

And let’s not forget the at least three vaccine doses she said she had which were supposed to “prevent” getting Covid-19 in the first place (preventing infection is the longstanding definition of what a vaccine is supposed to do, the recent CDC change to the literal definition notwithstanding).

A woman tested positive mid-air so she quarantined in the plane’s bathroom for the remaining 5 hours of the flight pic.twitter.com/ADNc0KKEM7

Her ten-day quarantine in a Red Cross hotel in Reykjavik appears to have gone smooth, with no mention of serious or severe symptoms.

After all this, she told CNN, “Honestly it has been an easy experience.” It appears that for now her “faith” in the just “trust the science” narrative remains unshaken. But for the rest of us, the saga is a perfectly absurd demonstration of all that’s been “learned” from the Covid lunacy of 2021.

Meanwhile, such stores are leading a handful of mainstream pundits to begin to ask…

Thoughts? This a solid description of how these conditions develop. Question: are we in such a state? https://t.co/vhcKE1Bub9