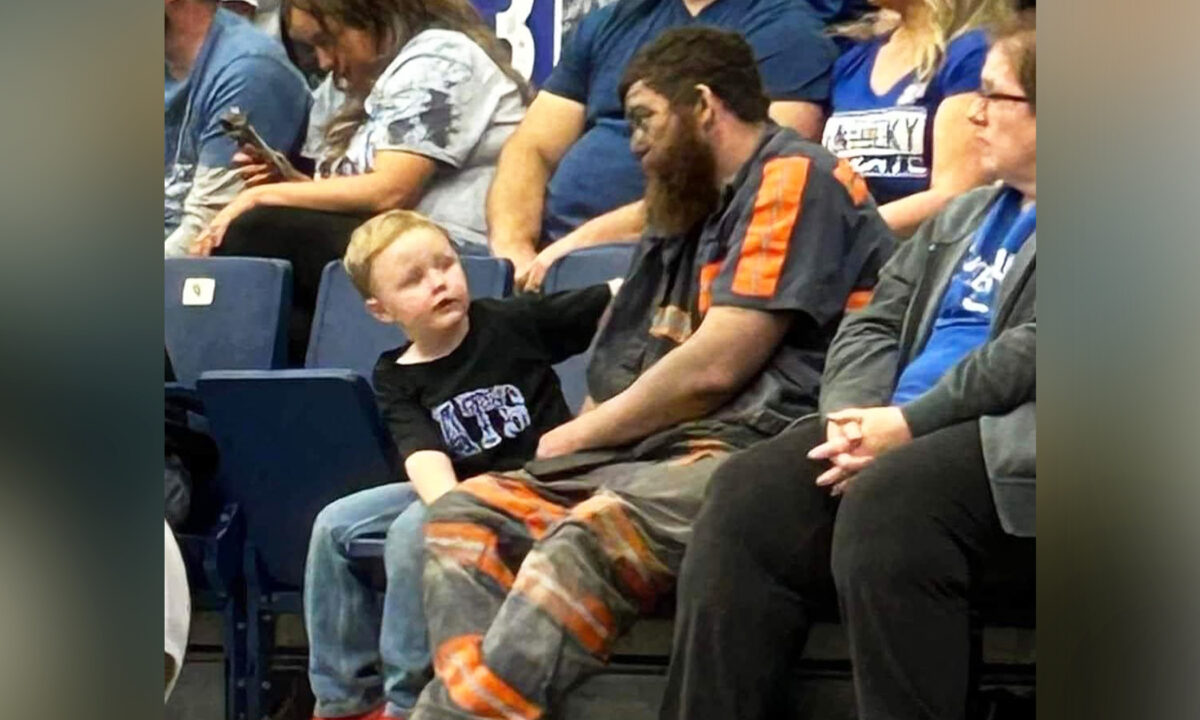 A dedicated father who works as a coal miner was spotted at a basketball game with his son, still wearing his sooty work clothes. A photo of the pair has gone viral.

On Oct. 22, Michael Joe McGuire attended the University of Kentucky’s men’s basketball annual Blue-White game at the Appalachian Wireless Arena with his wife, Mollie, and their son. The game was a fundraiser held for victims that had been affected by the floods in eastern Kentucky.

An attendee, Sue Kinneer, spotted Michael sitting in the bleachers in his work clothes and snapped a photo, and shared it on Facebook.

“I don’t know who this guy is but he has my vote for ‘father of the year,’” she wrote. “He obviously just got off from work and brought his little boy straight to the Blue-White game!”

The picture was later shared by University of Kentucky basketball coach John Calipari. In celebration of Michael’s work ethic and family values, he wrote: “My family’s American dream started in a Clarksburg, WV coal mine, so this picture hits home … I have tickets for him & his family at Rupp to be treated as VIPs!”

As it turns out, the McGuires are no strangers to juggling between Michael’s job and family time. Three days after the game, Mollie took to Facebook herself to respond to the media attention.

Mollie wrote, “We are just like any other family here in Eastern KY, this was just a normal evening for us where we had plans but he had to work late.”

Her husband worked at Excel Mining until 5 p.m. and the game started at 6, Mollie said. But Michael, who often ends up missing events due to work, called ahead and told his wife and son he would meet them there.

“My husband chose the job he has to support our family so that I could be home to raise our wonderful children,” Mollie said. “So any chance he can be there he is, no matter how tired or dirty.”

It never crossed Mollie nor Michael’s mind that attending a game in a uniform would attract so much attention, but the family is grateful for the influx of love and support for Michael, and for coal miners everywhere. There will surely be “many memories made” during their VIP experience at Rupp Arena, Mollie said.