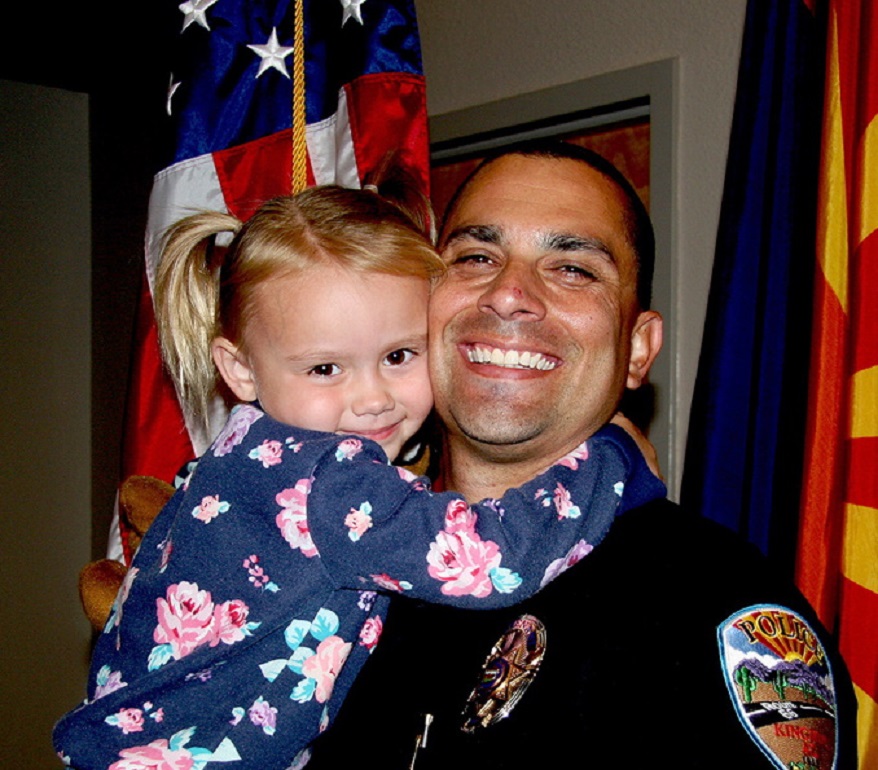 When an Arizona police officer and father-of-two was responding to a call for suspected child abuse he had no idea his life as he knew it would be forever changed when he pulled up to the house. Upon entering the home, however, the cop was left shaken by the sight in front of him.

Kingman Police Department lieutenant Brian Zach, a father-of-two, was working the night shift as a patrol sergeant when he received a call, asking him to perform a welfare check at a nearby home, according to ABC 11. He responded to the call, not realizing that his life would never again be the same after what he was about to witness inside the residence.

When Zach arrived at the house and went inside, he found a little girl and immediately knew something was terribly wrong the moment he laid eyes on her. Her name was Kaila, and she was just a toddler at the time. Sadly, the little girl was so badly hurt, it was obvious she had been abused. Making matters worse, this was the third time her abuse had been reported to authorities, according to Breitbart.

“I went there and realized that her injuries were definitely abuse and they needed to be investigated. I took care of her, took her back to the station,” Zach recalled, adding, “We watched ‘Wreck-It Ralph,’ and we just bonded.” The pair bonded so much in just five hours together, in fact, that Zach — although not knowing it at the time — had found the little girl who would eventually become his daughter.

“When I came home that night, I told my wife about this little adorable girl that we got to meet and I wanted to just bring her home,” Zach recalled, but this wasn’t a first for the loving police officer. “In the past 15 years, I’ve said that many times to my wife,” he admitted, adding that he often told her “of some kid that I met that I would love to bring home and love and take care of, so it was nothing new for her.”

“I had a lot of child abuse cases, and there’s always kids that I would bond with and I’d love to take them out of bad situations and just bring them home,” Zach furthered. So, this was nothing new. What was new, however, was the fact that this time, it would happen. A little girl would find her forever home with the police officer and his family in Kingman, Arizona.

However, it wouldn’t happen overnight. Instead, it would take two and a half years to make it official. After a representative with the Arizona Department of Child Safety (AZDCS) took Kaila to the hospital for evaluation and treatment of her injuries, Zach went home, but he wasn’t able to forget about little Kaila. Wondering how the toddler was doing, Zach called AZDCS and asked if he could visit her in the hospital.

The policeman was granted permission, and it didn’t take long before his family began talking about having Kaila stay with them. Since the agency couldn’t find any family members who were willing to care for the little girl, Zach and his wife Cierra took her in — but it wasn’t an easy feat at all. In fact, there was a lot that went into giving Kaila the home she deserved.

“We had to get a bed. We had to get a high chair, potty chair. She came with a bag of clothes that didn’t fit her and a sippy cup and that was it,” Zach recalled, according to AZ Family. For two and a half years, the Zachs cared for Kaila before officially adopting her in 2020 when she was four years old.

“The best thing to come out of 2020 is the fact that we gained an official member of our family,” a very happy Lieutenant Brian Zach declared. “That was my Christmas present,” he added, and he’s not the only one who’s thrilled with the way things turned out as both Ciera and Kaila had some declaration of their own.

“I would definitely encourage people to do it,” Cierra said, speaking of the fostering and adoption process, “because there’s so many kids who need guys even if it’s just for a small amount of time you can make such an impact.” Following Kaila’s adoption, Brian and Cierra Zach said they are planning to renew their foster license and help more kids.

“I love him — I love him so much,” Kaila said, and who could blame her? After experiencing abuse at the hands of those who were supposed to love her, this child was finally granted the home and loving family she deserved, thanks to a police officer who went above and beyond the call of duty in a big way.

“When we got her she knew three words. Basically, she grunted like a caveman, she didn’t know how to talk. And, now, she loves to talk,” Zach admitted, thrilled to report that Kaila is now happy and flourishing, which children tend to do in a safe and loving home. So, job well done, Officer Zach! Let’s hope this display of love and compassion sets an example for others to follow.