Cops clash with anti-Trumpers in ugly scenes at White House 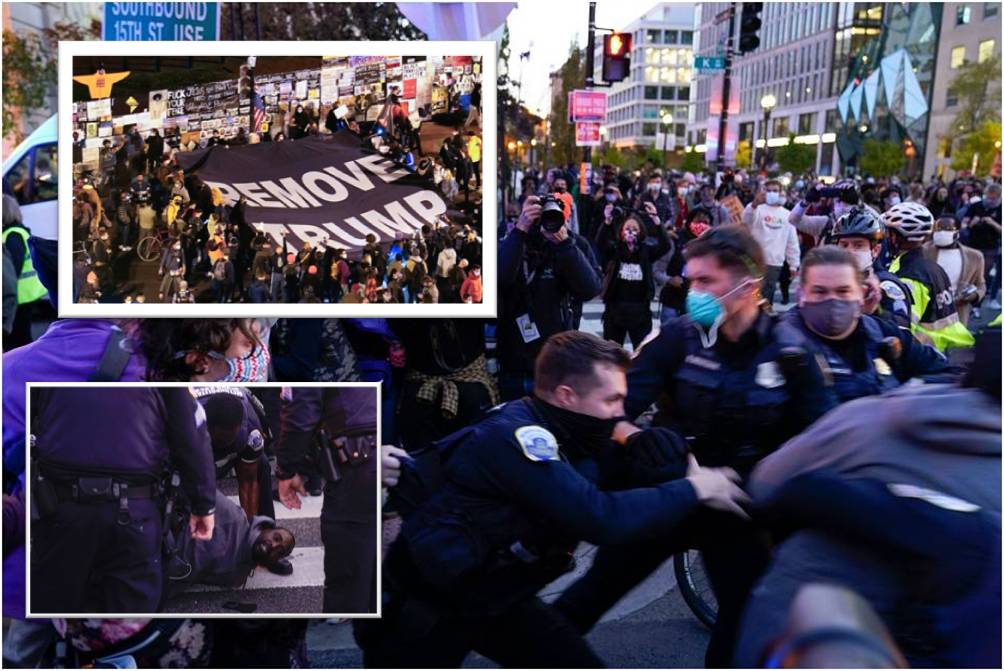 COPS clashed with BLM and Antifa protesters in ugly scenes outside the White House – as some declared they would stay for weeks if President Trump is re-elected.

Before polls had closed in D.C., a group of protesters clashed with police near Black Lives Matter Plaza and one arrest was made.

Cities across the country have seen storefronts boarded up and, in some cases, the National Guard being called, as law enforcement groups prepare for potential unrest.

In D.C., officers lined the streets around the White House and a fence was erected around the perimeter of 1600 Pennsylvania Avenue, where a thousand protesters gathered.

The demonstrators chanted “Whose streets? Our streets!” and “If we don’t get no justice, they don’t get no peace!”

Groups of teenagers danced in the street as onlookers cheered. Large banners, including one reading “Trump lies all the time,” were unfurled.

At one point, the marchers stabbed the tires of a parked police van to flatten them

Black Lives Matter and Shutdown D.C. were reported to have organized the gathering, which has been planned to last long into Election Night.

At Black Lives Matter Plaza, one block away from the White House, a giant screen displayed election results as DJs perform to motivate the crowd.

Nearby, a group of Trump supporters were also gathered – but they were greatly outnumbered by the anti-Trump crowd.

In the earlier scuffle, a group of about 50 police officers were surrounded by civilians who demanded that they “let go” a man who had just been arrested in Lafayette Square, The Sun observed.

As demonstrators closed in on law enforcement and demanded to know why the man had been detained, it became clear cops were heavily outnumbered.

Several crowd members appeared to be carrying weapons, including bats and sticks.

The officers clung onto each other, then backed away, changing direction several times until the crowds following them dropped off.

Police appeared to then retreat into a nearby hotel.

It’s unclear who the arrested man was or why he was detained.

Black Lives Matter protests have been taking place for months in the nation’s capital  – stemming from nationwide unrest that followed the death of George Floyd at the hands of police in May.

According to Fox News, a collection of Black Lives Matter and Shutdown D.C. groups held training sessions on Zoom, preparing how to mobilize protesters should Biden lose or the president does not concede.

Recordings from some of the calls, the report claims, show protesters planning for civil unrest in the city from Election Day until at least the end of the week – potentially up until the presidential inauguration in January.

The FBI did not confirm to Fox if an investigation into civil unrest is underway, but the bureau did confirm it is working with all levels of law enforcement to “gather and analyze intelligence to determine whether individuals might be motivated to take violent action for any reason.”

NYPD trucks were set up around Trump Tower as polls were set to close at 9pm local time.

Mayor Bill de Blasio said there was “no reason” for businesses to board up their windows ahead of Election Night, despite seeing widespread protests and store damage in Manhattan following Floyd’s death in the summer.