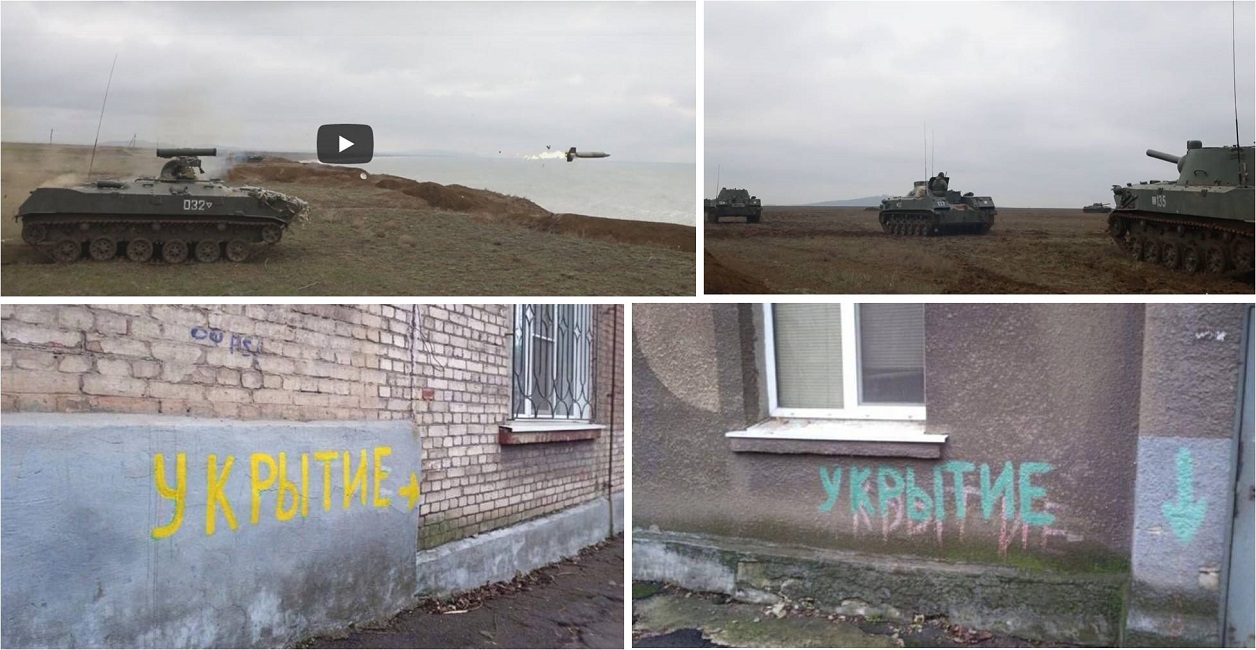 Right Sector Back on the Vanguard of Conflict – Moscow: Ukraine to lose 3 regions for start

The countdown to the start of the conflict in Eastern Ukraine has begun as, according to high-ranking Russian sources, Kiev has completed the transfer of forces and has signed a document that amounts to launching an attack.

Immediately in Donetsk and Luhansk, shelters were prepared and opened to receive the civilian population. You can see photos below with new markings in fact.

Clashes are raging and for the second day in a row at Donetsk airport, there is a dead Ukrainian soldier.

It is reported that the extreme paramilitaries of the “Right Sector” and “Rgt Azov” have been sent to the front.

Ukraine has announced a military exercise in the Black Sea for the use of fire near the ISU Alibey area for March 24-26.

See here the new signs for the shelters

Update: Signs to bomb shelters were updated in Donetsk https://t.co/AHguY9rLGh

According to a report in the major Russian newspaper Kommersant , Ukraine has prepared a document authorizing the launch of an attack on Donbas.

This was revealed by a military source who spoke to the Russian newspaper, emphasizing that “the document was prepared by the Ukrainian authorities and authorizes the Ukrainian soldiers to open fire on the Donetsk and Luhansk forces at any time they deem necessary.”

The Russians claim that the Ukrainian decree allows the Ukrainian Armed Forces to launch operations against Donbass, provided, of course, that talks at the level of the coordination mechanism have failed.

The Russian media continues by emphasizing that ” According to the figure of 4 of Normandy, the troops of Donetsk and Luhansk are obliged to obey the rules of the truce. “At the same time, it gives the Ukrainians the advantage of launching an attack on Donbass.”

Additional forces are being transferred to the border with Ukraine.

Donbass: paramilitary groups from Pravyy Sektor and Rgt Azov would be positioned on the front line (without further details), in particular snipers supervised by contractors from the OTAN https://t.co/aMKFoh1213

4 NATO ships are heading to the southwestern border of Crimea

The ships are heading to the southwest coast of Crimea as “special military exercises” have been planned , the Russians note.

Russia is transferring forces to the border with Ukraine

Russian ED has deployed tanks and special forces of VDV paratroopers on the border with Ukraine to Crimea and Nizhny Novgorod.

Large-scale exercises of airborne forces and marines are taking place in Crimea. The same is true in the Nizhny Novgorod region.

“In this way, Russia has made it clear that it will be actively involved militarily,” Russian media stressed.

Watch here the new videos from the Russian exercises

Russia: The 3 regions that Ukraine will lose

Former military say that if Ukraine starts a war, it will lose 3 territories.

These are Kharkiv, Zaporozhye and Odessa.

This was reported by sources in Donetsk and Luhansk who took part in previous hostilities.

Rostislav Zhuravlev reports that in Kharkov 80% are Russians.

Alexander Grigorenko says that in other cities of Eastern Ukraine, there are pro-Russian sentiments.

This is the whole region of southeastern Ukraine with the exception of Dnipropetrovsk.

Former Ukrainian Prime Minister Mykola Azarov, who ruled under Yanukovych, has published a map of Donbass.

In the map you can see below, he lists the forces that have been transferred at the suggestion of the Americans as he says.

The document is dated September 2020. This means that the forces of the Ukrainians are even greater.

According to the map, the Ukrainians have transported 90,000 soldiers, 450 tanks, 230 MLRS RPGs, 800 anti-aircraft warfare systems of various types, 300 TOMA amphibians.

Donetsk and Donbass together have 34,000 troops, three times less than the Ukrainian forces. They also have 650 tanks, 500 artillery pieces, 260 MLRS RPGs and 100 anti-aircraft systems.

The map also shows Russian forces on the border with Ukraine

In addition, Russian forces are present in the Valuyki area, near Luhansk. They number about 3500 soldiers.

There are also Russian forces in Rostov. In the village of Kadamovskaya, there are 215 tanks, 157 TOMA, dozens of artillery pieces, mortars and anti-aircraft guns.