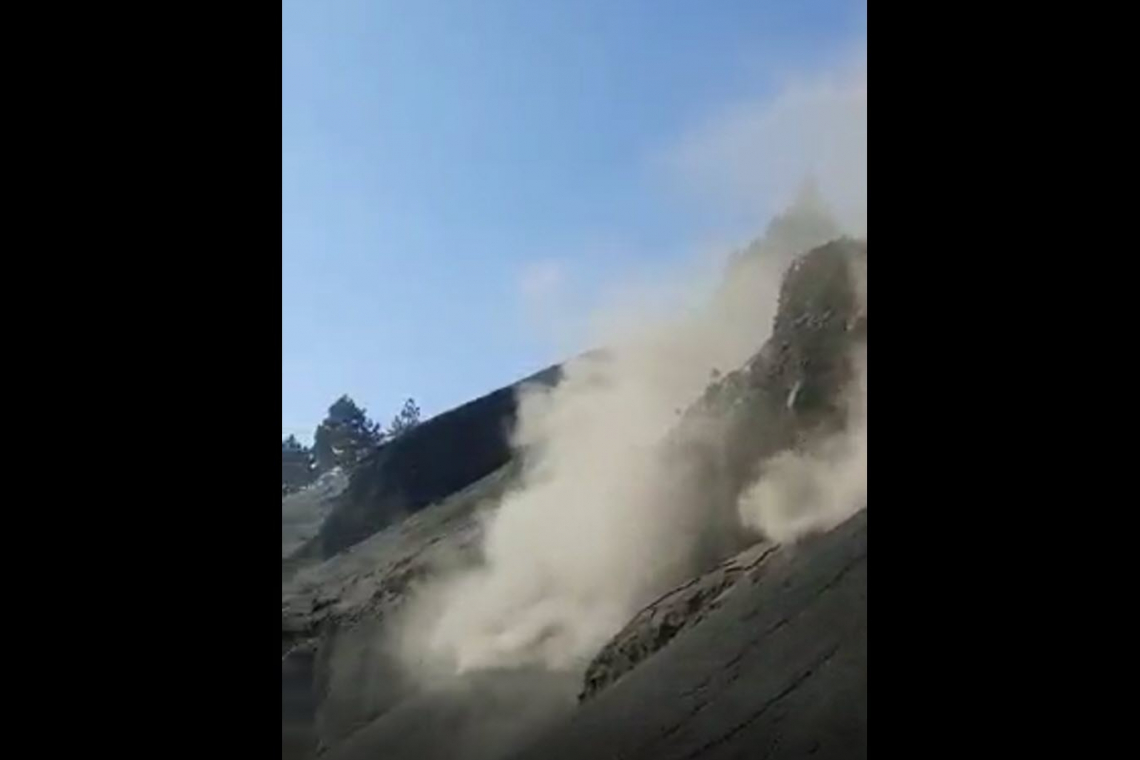 As of 2:30 PM eastern US time, we were sent video of small landslides that have begun on the island of LaPalma, in the Canary Islands, Atlantic Ocean, off the northwest coast of Africa.  These slides are happening in EXACTLY the spot we DON’T WANT! Video below:

Given the concern about the presence of alleged gas emissions in various areas of the Tamanca ravine, an INVOLCAN team traveled to them and verified that they are small landslides due to the significant accumulation of ash.

The Tamanca Ravine is nearby the location shown on the scalable Google map below:

The Tamanca ravine is almost dead center of the area on LaPalma which IS  the unstable land mass that scientists fear will slide off into the Atlantic, sending 500 Billion Tons of rock and dirt into the ocean, and generating a mega-tsunami.  Here is video from the micro landslides:

The fact that these small landslides are happening, on their own, in the center of the unstable land mass indicates that the rest of the landmass is also capable of beginning to slide on ITS own, from what is taking place with the ongoing volcanic eruption.

Moreover, the INVOLCAN team, which is the official government volcano team on the Canary Islands, mentioned they responded to that area because of “reported gas emissions.”

Translating from Spanish to English, “gas” could also mean steam.

Whether it is gas or steam matters little because clearly SOMETHING is emanating from the ground.

If it is gas from the volcano, then that would mean lava is headed there too.  If it is STEAM coming out, then lava has already made it there and has begun superheating the groundwater, causing steam.

It is THIS PRECISE MECHANISM that could result in steam actually “lifting” the unstable land mass, and allowing it to glide on a cushion of steam and ground water, right into the Atlantic Ocean.

Either way, the development is VERY BAD and people along the east coast of the USA must now keep watchful eye on events taking place there.

Scientists who personally traveled to LaPalma in the 1990’s found a fracture, almost 9 miles long, at the top of the 6,000 foot tall ridge, where this unstable land mass SLID 13 feet down toward the ocean during a previous eruption, then stopped.

The fact that there are now micro landslides on that same landmass is a huge danger signal.

If that same land mass slides again, and goes into the ocean, it will generate a mega-tsunami that will travel across the ocean, and slam into the east coast of North America.

Scientific models show the tsunami would be thirty to fifty METERS upon landfall.  That would mean waves from about 100 – 164 FEET tall, coming ashore, and wiping out east coast cities.  Here is a brief, four minute explanation from the scientists:

Any tsunami that is generated on LaPalma would arrive at the US east coast from 7 to 8 hours after the landslide.  But trying to evacuate literally millions of people from Boston, New York City, Philadelphia, Baltimore, Washington DC, Norfolk, Savannah, Jacksonville, Miami, and ALL the people on ALL the Florida Keys (which would be completely over-washed), is not physically possible even in 7 hours.

There would be immediate traffic jams and people would find themselves stuck in cars on highways as the tsunami hits.

FEMA estimates the US death toll from such a mega-tsunami, would be sixty-five million (65,000,000) Americans.

If you hear that the massive landslide has taken place, YOU need to get away from the coast IMMEDIATELY.  Don’t wait.  Because if YOU wait, and then authorities issue the Emergency Alert System telling millions to flee for their lives, YOU will be stuck as the masses panic.  People might become so panicked they might go “Mad Max.”  It would likely be utter chaos.

Have a plan as to where you will evacuate to.  Know which route you will take to get there.  Plan an alternate route if your original goes bad.  Have a go-bag for each member of your family with some clothes, some snacks, whatever medicines you might need and so forth.

Have the vehicles gassed-up and ready; you don’t want to be sitting in gas lines when millions of people who made no plans and are panicking, are also trying to get fuel.

IF YOU HEAR THE LANDSLIDE HAS TAKEN PLACE, GET OUT. DON’T WAIT.

My observations are that the mountain is showing clear signs of escalation. EARTHQUAKE uptick in strength and frequency. At least one new Vent, maybe a couple. This may go downhill even more… fast today.

Additional video has come in from LaPalma showing STEAM venting from the ground between Las Manchas and Jedey, shown by arrows on the map below.

This means STEAM is now coming from under the northern part of the unstable land mass.  This is VERY bad.  Look:

Lava is now heating the groundwater beneath that unstable land mass, and that is PRECISELY what scientists say can cause uplift of the land (from steam pressure generated by boiling groundwater), allowing it to slide into the ocean on a cushion of steam and groundwater.

There has been a tertiary cone collapse on the erupting volcano!

A very large section of the vertical cone, which helped form the “mouth” at the top of the volcano, tore apart tonight in a very visible collapse.

As the sidewall fell into the volcano, a burst of smoke, and then a gorge of lava unlike anything I’ve ever seen before!

Here is a one minute video:

This situation just keeps getting worse!