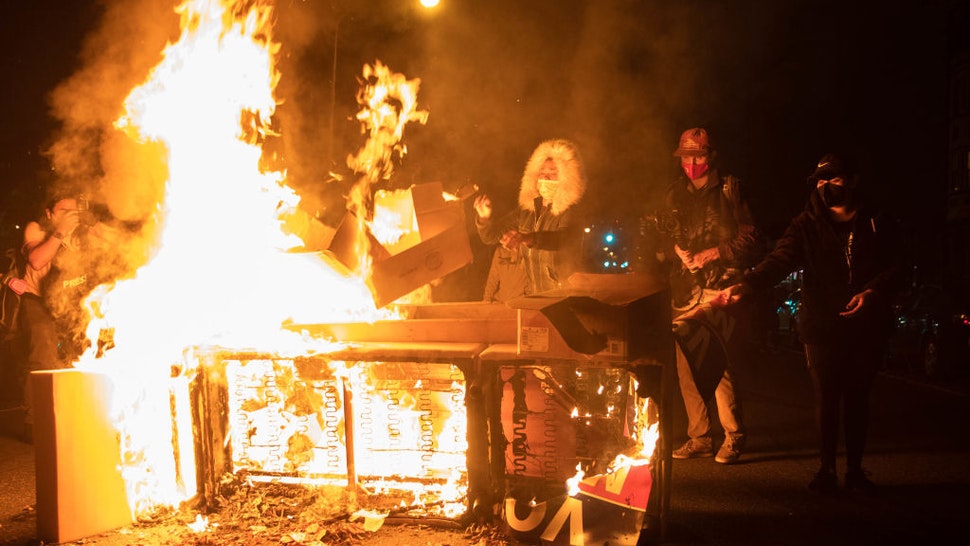 Rioters tagged a Bank of America with “Death to America” graffiti and destroyed numerous other stores during the second night of widespread rioting and looting in the Democrat-controlled city of Philadelphia, video shows.

The city erupted with violence and crime ostensibly in response to the fatal shooting of a black man who allegedly wielded a knife at officers and refused to comply with orders to disarm.

“A Bank of America’s windows were smashed and tagged with ‘death to America’ while a black person was still in it! The fire in the background makes the video look more cinematic,” captioned independent protest reporter Elad Eliyahu.

Similarly, during rioting in Kenosha, Wisconsin, back in August, rioters screamed “Death to America” and burned the American flag.

The Daily Wire reported at the time: “In one incident from the demonstration caught on video and circulated online, one protester holding a small American flag screamed ‘Kill the f***ing police!’ A second video showed a flag being set on fire as a protester shouted, ‘Death to America!’”

The video from Tuesday night in Philadelphia shows other graffiti that appears to read “f*** bank” and “class war”; the “a” in war is drawn with a circle around it, an apparent nod to violent and destructive left-wing group Antifa, which uses the anarchist symbolism.

A bank of America’s windows were smashed and tagged with “death to America” while a black person was still in it! The fire in the background makes the video look more cinematic pic.twitter.com/UMrfoGixIU

The looting was so excessive that one protester, according to Fox News, seemingly brought his own appliance dolly to jack a washing machine.

The rioting was similarly violent on Monday night, when at least 30 police officers were injured, including one hospitalized with serious injuries.

“The ostensible reason for this latest bit of barbarity is the shooting of Walter Wallace Jr.,”. “As a video recorded by a bystander shows, Wallace was armed with a knife and approached officers after refusing to comply with their orders.”

“This would seem to be about as lawful as police shootings get,” he argued.

In a statement, the White House called the destruction in Philadelphia “the most recent consequence of the Liberal Democrats’ war against the police.”

“The riots in Philadelphia are the most recent consequence of the Liberal Democrats’ war against the police,” the statement reads. “Law enforcement is an incredibly dangerous occupation, and thousands of officers have given their lives in the line of duty. All lethal force incidents must be fully investigated. The facts must be followed wherever they lead to ensure fair and just results.”

“In America, we resolve conflicts through the courts and the justice system,” the White House added. “We can never allow mob rule. The Trump Administration stands proudly with law enforcement, and stands ready, upon request, to deploy any and all Federal resources to end these riots.”