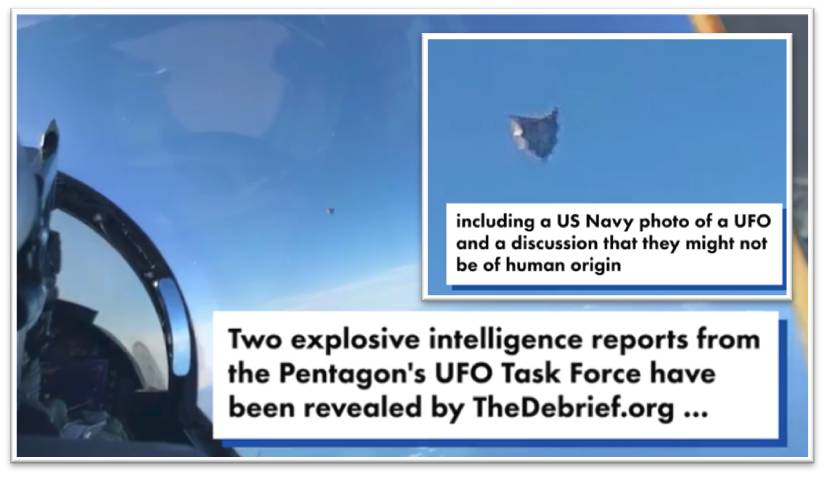 Leaked photo from Pentagon UFO task force shows ‘silver cube’ hovering over the Atlantic at 35,000ft – as classified reports reveal concerns ‘aliens’ could be operating beneath the world’s seas

The existence of two classified Pentagon reports on UFOs has been revealed, the contents of which include a leaked photo depicting a mysterious object hovering over the Atlantic.

The DoD’s Unidentified Aerial Phenomena Task Force issued the two classified intelligence ‘position reports’ in 2018 and the summer of this year, and they circulated widely in the U.S. intelligence community, according to a detailed account from The Debrief based on interviews with multiple intelligence sources.

The position reports’ startling contents included a leaked photo that has never before been made public, accounts of ‘Unidentified Aerial Phenomena’ (UAP) emerging from the ocean and soaring through the sky, and an admission that extraterrestrial origins for the objects cannot be ruled out.

‘These revelations are extraordinary, and give the public a genuine peek behind the curtain when it comes to how the US government is handling the UFO issue,’ Nick Pope, who investigated UFOs for the UK Ministry of Defence, told DailyMail.com.

‘What this new information does is confirm that the US government is taking the UFO phenomenon more seriously than ever before,’ he added. ‘I anticipate further revelations shortly.’

The Pentagon did not immediately respond to an inquiry from DailyMail.com requesting confirmation of the existence of the two position reports, as well as the authenticity of a leaked cockpit photo included in one of the reports.

The leaked photo, published by The Debrief on Thursday, was included in the 2018 position report, two DoD and one intelligence source told the outlet.

The leaked photo was was captured in 2018 off the East Coast of the United States by a military pilot using his cell phone camera, the sources said.

The photo was previously described as depicting an ‘unidentified silver ‘cube-shaped’ object’ hovering over the ocean at an altitude of roughly 30,000 to 35,000.

It appears that the image was captured by the backseat weapons systems operator of what appears to be an F/A-18 fighter jet.

Experts were baffled by the photo, but noted that the object somewhat resembles a GPS dropsonde, an atmospheric profiling device designed to be dropped from aircraft, typically over a hurricane.

However, the object in the photo does not have the GPS transponder dangling from it as a dropsonde does — and dropsondes plunge toward the Earth at 10 to 12 meters per second, rather than hover in the air.

It is possible that the object is some other kind of weather balloon — but the Pentagon task force found it baffling enough to include in their report.

The 2018 report is said to have provided a general overview of the UAP topic and included details of previous military encounters, as well as a frank admission that the origin of many UAP could not be determined.

As well as offering a list of other, more prosaic explanations, the report expressly stated there was a legitimate possibility that UAP represented ‘alien’ or ‘non-human’ technology.

Even more shocking were the revelations contained in a second, revised report issued by the Unidentified Aerial Phenomena Task Force earlier this year.

The report delved deeply into the possibility that UAP are able to freely move both through the air and underwater, zipping through the ocean undetected and emerging into the air at incredible speeds.

The report contained an ‘extremely clear’ photograph of an unidentifiable triangular aircraft that emerged from the ocean in front of a F/A-18 Hornet fighter pilot, sources told The Debrief.

That photo has not been leaked publicly, but artist and researcher Dave Beaty‘s recreation shows it as described by sources: a large equilateral triangle with rounded or ‘blunted’ edges and large, perfectly spherical white ‘lights’ in each corner.

The encounter occurred off the East Coast in 2019, according to officials who had seen the latest report.

Two officials said said the photo was taken after the triangular craft emerged from the ocean and shot straight upwards.

Officials say the latest report focused specifically on the possibility of ‘transmedium’ craft that are able to operate both underwater and in the air.

It is not the first time that military sightings have suggested the existence of transmedium UAP.

In 2017, former Navy Commander David Fravor spoke out about the infamous USS Nimitz ‘Tic Tac’ encounter that occurred over the Pacific in 2004.

Fravor says he was flying in an F/A-18F Super Hornet when he made visual contact with the object, which seemed to be just below the water, before it emerged and sped out of sight when he tried to approach it.

The object was smooth, white and oblong, and had no visible wings or engines, Fravor said. He told the New York Times the experience left him ‘pretty weirded out.’

In August of this year, the Pentagon officially acknowledged the existence of the Unidentified Aerial Phenomena Task Force, which authored the two newly revealed reports.

‘The Department of Defense and the military departments take any incursions by unauthorized aircraft into our training ranges or designated airspace very seriously and examine each report,’ the Pentagon said in a statement at the time.

However, an internal email obtained by The Debrief shows that almost one year before the DoD’s announcement, the highest levels of the U.S. military were already being briefed on UAP.

Admiral Burke tells General Wilson: ‘Recommend you take the brief I just received from our Director of Naval Intelligence VADM Matt Kohler, on Unidentified Aerial Phenomena (UAP). SECNAV [Secretary of the Navy] will get the same brief tomorrow at 1000.’

The ‘SECNAV’ would have been then-Secretary of the Navy, Richard V. Spencer, who was fired about a month later over disputes about the court-martial of Navy SEAL Eddie Gallagher.

Last year, the Senate Select Committee on Intelligence received its own classified briefing on UAP — and the committee has asked the Pentagon to release an unclassified report on such encounters. The request is not binding, however.

‘People knew the Senate Intelligence committee had demanded a report from the Director of National Intelligence, and that an Unidentified Aerial Phenomenon task Force has been set up,’ Nick Pope, the British UFO expert, explained to DailyMail.com.

‘What we now have is an insight into what’s going on behind the scenes, and what this task force has been doing,’ he added.

‘I was genuinely surprised to see some of this information in an open source publication and I think some people within the defense and intelligence community are sailing very close to the wind here in discussing matters that are highly classified,’ said Pope. ‘I wouldn’t be surprised if there’s a leak inquiry going on at the Pentagon over this.’

While the intelligence community is required to grant Congress access to classified information, only the executive branch has the authority to declassify national security information in order to make it public.

‘President Trump has hinted he knows some great secret about UFOs, that he might declassify,’ said Pope. ‘This might turn out to be the ultimate monkey wrench for the new administration!’