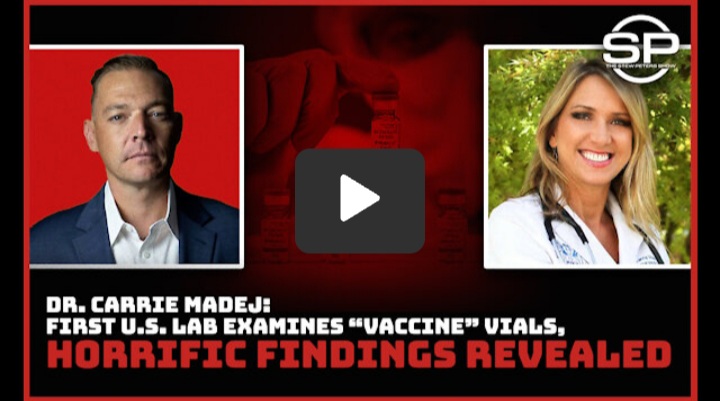 Dr Carrie Madej joins Stew Peters to describe the incredibly creepy things she found when she put the contents of the vials from three different batches of the Moderna and the Johnson & Johnson vaccines under the microscope.

She describes what appears to be self-assembling synthetic biology and these horrific, seemingly sentient microscopic tentacled organisms and brilliant colors emanating from some of these graphene-like structures which nanotechnology experts told her may be indicative of a superconducting material.

“First, it looked just translucent and then, as time went on, over two hours, colors appeared, which, I’d never seen anything like this. There wasn’t a chemical reaction happening. It was like a brilliant blue and a royal purple, a yellow and sometimes green. These colors appearing, I did not know what that was.

“All the particulates, all these colors started to move to the edge and there was self-assembling going on. Things were growing…They looked synthetic and then, there was one particular, I’d say, object or organism – I’m not sure what to call it, that had tentacles coming from it and it was able to lift itself up off the…glass slide.”

Stew interjects, “It was alive?”

“It appeared, yeah,” she replies. “It appeared to be self-aware or be able to grow or move in space.  All I can tell you is this is not something they taught us in medical school. Nothing in my laboratories, nothing that I’ve seen before and I have shown this to other people in the field and they don’t know what it is, either.

“And I thought, when I first saw this, I kept looking at it over and over again and a colleague with me and we both thought, wow, this almost appears like it’s self-aware, like it knows we’re watching it. It’s just an intuition, a feeling of mine but it was very upsetting and so after two, two-and-a-half hours, everything was destroyed, of course.

“And I thought, maybe that was a fluke, in a way. Maybe that was just that one vial. And so, just recently, the lab was able to get more vials and same manufacturer but a different batch, of course; looking at it the same way under the compound microscope – and ANOTHER ONE of those tentacle-like structures appeared…

“I was also able to look at the contents of a Johnson & Johnson vial, and there was definitely a substance that looked like graphene. They all had graphene-like structures in there. Whether or not they were, I don’t have the capability of testing them in this lab but that it what they appeared to be.

“They had fatty substances, like a sticky glue-like substance that would be considered a hydrogel in both of them. So that means they’re lying. They’re lying to us about the Johnson & Johnson not having nano lipid particles or anything of that substance in there but it does.

“I’m describing what I’m seeing but I’ve never seen anything like this before! They’re not supposed to be in these injections they’re falsely calling vaccines. What are they going to do to somebody? What are they going to do to a child? I started crying when I saw these a second time through the microscope, because it was a confirmation of everything I saw the first time. What will happen?”

Stew says, “If I was looking through a microscope at something that was supposed to promote health and safety and some self-aware tentacle-equipped creature started moving, I would probably run out of the laboratory. That’s just me. I’m not scared of a lot but that seems scary that is going into the blood of global citizens and you’re right, they want to push this into our children.”

“Something’s not right in the world, I think we all know that, right now and to me, it’s definitely on the level of a spiritual warfare. Looking at at it under the microscope, absolutely pushes me, inspires me to make more of these videos, if we can get the lab to get these samples to do that in real time, so you can actually see what we’re doing; to have proof of, ‘Yes, this is happening. This is what we are seeing,’ so you, yourself can see what is happening under the microscope.”

Stew then asks, “Before you started talking about the self-aware whatever it is that lifted itself up off of the glass, you mentioned something about an injectable computing system. What do you make of that?”

“When colors just appeared in the solution – I’m talking about, there’s no color or very little – all of a sudden, the most brilliant blue, the most brilliant yellow, the brilliant purple appeared and more and more and more, over time, I’ve never seen anything be able to do that besides if you added another substrate for a chemical reaction. You know, it has to react with something. I didn’t know what could do that.

“People need to remember that the Gates Foundation, or at least Bill Gates and GAVI, his companies, working with MasterCard and TrustStamp, an artificial intelligence program; testing it on the people of West Africa, with their COVID vaccines – injections, I should say; giving them a digital ID. They can only get their monetary funds through the digital ID and Mastercard, no other way, no cash, nothing. And all of their medical records; all their information downloaded into this digital format in their body.

“They’ve been doing this since July of 2020 and they said once they have it perfected, they would like to unveil it to all the developed nations. And what are they calling it? The ‘Wellness Pass’, which is also known as a vaccine passport.

“So how do they do that, Stew? They have to put something inside your body to monitor you and know everything that you’re doing. So people need to wake up. What could they put inside your body for that to happen? How would they do it?

“I think Gates is already admitting to us how he’s doing it or how he wants to do it. How much does it take? I don’t know. I just know that I’m seeing these things with my own eyes, things that don’t make sense, things that look like they…are the advent of starting something of artificial intelligence inside the human body.

Dr Madej promises to return to Stew’s show when she is able to obtain video of her next microscope investigations of the vaxx.