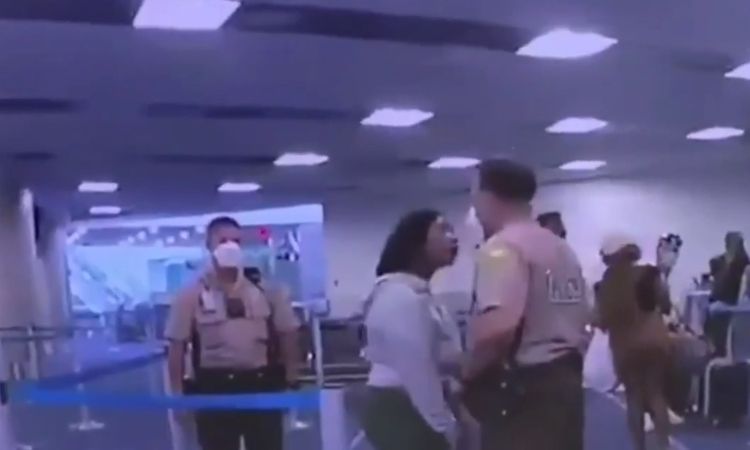 A Miami-Dade Police officer has been cleared of any wrongdoing related to a physical confrontation at Miami International Airport.

The video showed MDPD Officer Antonio Rodriguez slapping a woman after she had become belligerent at a gate in the June 2020 incident.

The revelation that Rodriguez won’t be prosecuted was made in a final memo released by the Miami-Dade State Attorney’s Office on Tuesday. The news emerged as a county police officer on Monday got into a brawl with unruly passengers at MIA, again captured on widely circulated videos.

The Miami-Dade State Attorney’s Office concluded there is insufficient evidence to charge the officer.

The police department described the slap as a “distraction strike” to get the woman under control.

Prosecutors determined it was a justifiable use of force, saying that under Florida law she was the aggressor.

It started when Paris Anderson, visiting from Chicago, was late to board her flight home. The gate agent refused to allow her to fly “because she was belligerent and intoxicated,” the memo said. She went to the ticketing counter to catch a flight late in the day, then began to argue with agent when told she could not fly until the next morning.

After Anderson entered a roped-off area at the counter, agents called police. Body-worn cameras showed Anderson was “excited and upset” in explaining to another officer why she needed to fly home. Rodriguez, the memo said, walked up and told her “she had to leave the area and find another airline.”

He and another officer, Ricardo Alvarez, told her seven times to collect her belongings and leave, according to the memo. Anderson and Rodriguez began jawing at each other and Anderson “made a comment about punching the ticketing agent located behind the counter,” the memo said.

Rodriguez stepped to the side and told her “to go hit the ticketing agent and then told her she was not going to do anything,” the memo said. Then, Anderson walked up to Rodriguez and taunted him “You acting like you white, when you really black, don’t walk up on me.”

Anderson is Black, and Rodriguez is Black Hispanic. Body camera footage showed Anderson “may have touched” Rodriguez’s chin or mouth area — and that’s when he struck her with the palm of his hand.

(Rodriguez blurted out that he was headbutted, although that’s not what happened, she might have an attempt to headbutt him, the memo pointed out).

However, things are not improving because airport brawls are seen every day!

Miami Dade Aviation’s chief executive and director Ralph Cutié said the airport was seeing high footfall during the ongoing winter travel season, with the indirect consequence being an increase in nationwide bad behavior as well.

“Disruptive passengers face police arrest, civil penalties up to $37,000 [£27,998], being banned from flying, and potential federal prosecution. We have worked so hard to rebound from the pandemic and make traveling safe again, so we can visit our loved ones,” the official said in a statement.

Social media censorship is suppressing the truth about the dangers of globalism and brutal cultures infiltrating the west. Please share this article wherever you can. It is the only way we can work around their censorship and ensure people receive news about issues that Democrats and the mainstream media suppress.