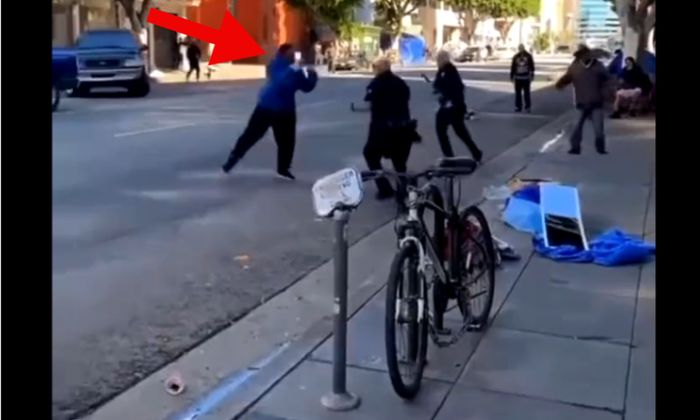 My goodness, that is embarrassing to watch!

Not only are the officers out of shape and have no idea how to fight, but they lose their batons and fall all over the sidewalk.

To make things worse, their use of appropriate force is limited by all the policies Los Angeles has implemented to try to correct the sYsTeMiC rAciSm that’s apparently rampant in every police department across the nation.

Better to take a skull fracture than pull out a taser or a gun on a black guy if you’re a white officer.

Watch the embarrassing video below:

Crime in LA, which has skyrocketed since the Black Lives Matter riots and defund the police rhetoric that evolved from the death of George Floyd in 2020, has been cited by other businesses as the reason to pack up and leave.

Also, the police department is forced to lower its standards when it comes to cops and you can see the end game in the video above!

As one of our readers sent us an email with his current experience at the PD.

Out of shape cops have always been a problem, but with the current staffing issues departments are having to take guys that have been riding a desk for a decade and make them do patrol. Not only might they be out of shape, but they probably haven’t been paying too much attention during defensive tactics training. There was, for example, that recent shooting somewhere up north (I want to say Michigan?) Where a female officer fresh back to patrol seemed to shoot a guy when she meant to tase him.

Back in March crime was one of the big issues discussed during a debate by the top candidates running for mayor of Los Angeles.

While many of the candidates talked about an uptick in crime, billionaire businessman Rick Caruso gave a particularly dark view of public safety.

“Everybody in this city — at every corner of the city, no matter where you live, what your background is — is scared to walk out their doors. Everybody is worried about crime, is worried about their children going to school,” Caruso said. “I was in Watts the other day at the St. Lawrence school listening to those parents worry about when the sun goes down what happens. Children are asleep on the floor because bullets go through the window.”

The sad reality of the “defund the police” movement!