European alarm: Urgent signal from Ukrainian services and CIA for Russia-Ukraine conflict – When to identify it – “Prepare the people” (video) 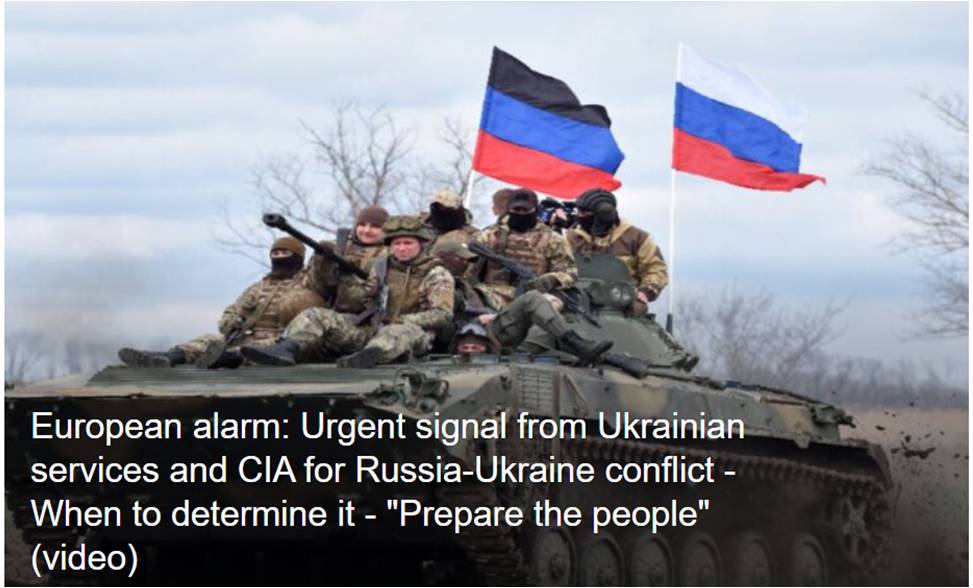 For the first time bombings inside residential areas in Donetsk (video)

An urgent signal for the start of hostilities was sent by Ukrainian secret services, according to a report that leaked to the media recently as part of “preparing the people for an armed conflict.”

Their conclusion coincides with the CIA’s assessment that “the concentration of Russian forces on the border with Ukraine could lead to a limited invasion.”

Burns said US services had exchanged information with European countries on the escalation, which is why President Biden called on Putin yesterday to address the “very serious concern”.

And an important detail: The date of the Ukrainians coincides with Putin’s speech with all that entails…

CIA Director William Burns told a US Senate hearing that Russia had transferred large quantities of equipment and forces to the border with Ukraine to allow a Russian invasion of the country.

“I express my deep concern over the continuing Russian military development in Crimea and Donbass over the past four weeks.

We must not underestimate President Putin and the Russian leadership

The great military development with transports of forces, tanks, artillery and armor at the border, sends us multiple signals

It may be a way of intimidating the Ukrainian leadership and a signal to the US, but it may also have reached a point where it could lay the groundwork for a limited military invasion of Ukraine.

It is something that not only we, but also our Allies take seriously. “

Donetsk: For the first time bombings inside a residential area

For the first time in a long time, bombings are taking place inside residential areas in Donetsk.

Explosions are heard in the airport areas, in the village of Staromikhaylovka, in the Kievsky district, in Spartak, Opytnoe and Veseloe.

What the report of the Ukrainian Secret Service says

The briefing was made by the head of the GUR Secret Service of the Ministry of Defense of Ukraine, Colonel Kyrylo Budanov, during a meeting with the Security, Defense and Intelligence Committee of the Ukrainian Parliament.

“According to our information, Russia will complete the deployment of its troops on the Ukrainian border on April 20.

By then Russia will have transported 110,000 troops.

Upon completion of development, the total number will be 56 Battalions.

In conclusion, everyone will have arrived by April 20.

The main areas of concentration of Russian forces are Crimea in the Opuk and Angarsky regions and in the Klintsy and Pogonovo regions in Bryansk and Voronezh.

We are still waiting for such a team to arrive in Pogonovo with 4 additional launchers.

Taking into account the data so far, a total of 47 enemy Battalions have been transferred. In the direction of Orel-Voronezh it is 15, in Don it is 12, in Crimea it is 20.

By the end of April the number will increase by an additional 9 Battalions.

In these areas, the enemy increases the control systems of its forces, develops fire control means while there is also air support from the 4th and 6th Air Force and the air defense. The Naval Squadrons of the Black Sea Fleet also provide protection.

We believe that this measure is an element of operational camouflage for the development of Russian forces. Their real purpose is to test their readiness for operational use in the event that the Kremlin decides to give the order.

The total number of tactical aircraft is 330 and 240 helicopters.

Ships and submarines exist from the Fleets of the Black Sea, the Baltic, the Northern Fleet and the Caspian Fleet.

About 40 warships and submarines have been assembled.

Russia has 3 options against Ukraine