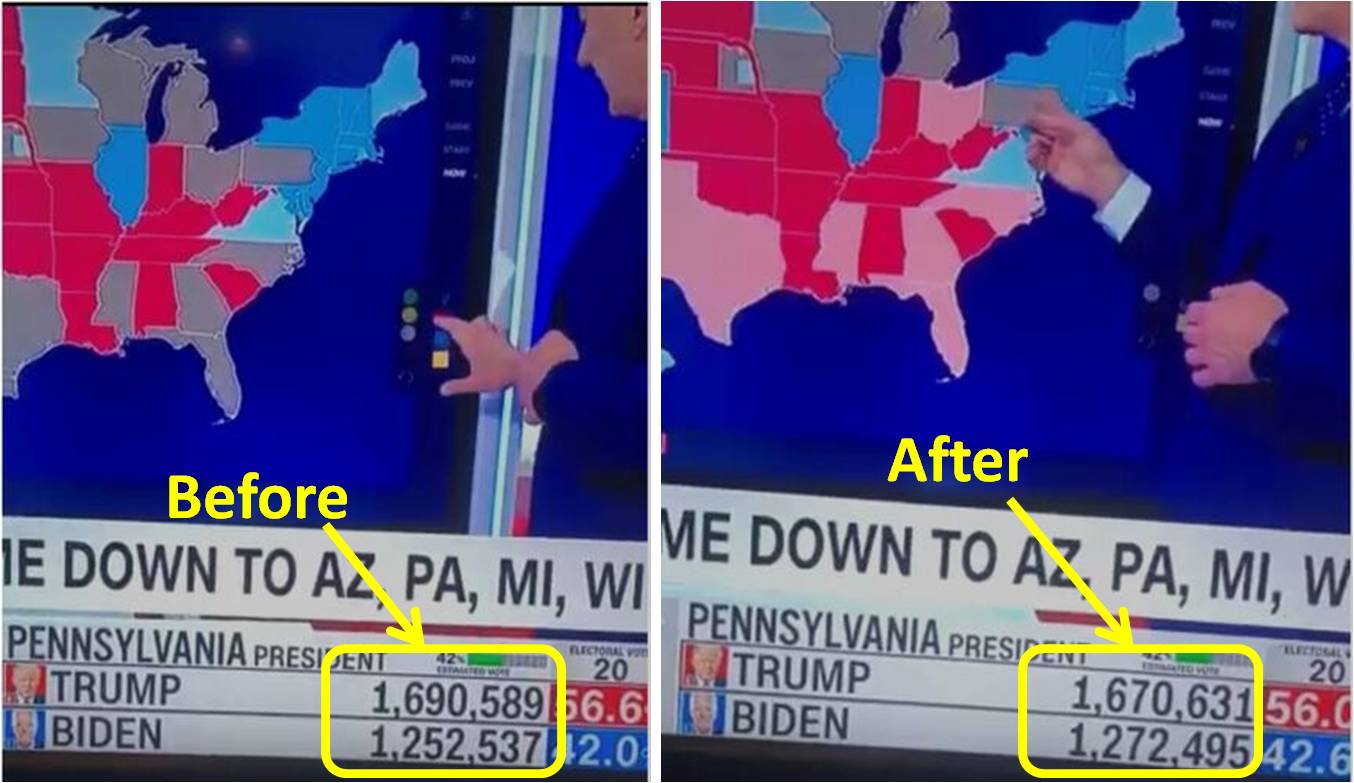 Around 1:30 in the morning of Nov. 4, when I went to bed, Trump was leading in the vote count in two Midwest swing states I was closely watching, Wisconsin — about 2%, and Michigan — about 3%, well on his way to an “unexpected” election victory nationwide.

Around 4:30 A.M., I woke early and decided to catch up on the election results on my iPhone, being careful not to wake my wife.  Imagine my surprise to see that, overnight, Trump’s lead had shrunk to less than 1% in Wisconsin and about 1.5% in Michigan.  But what really startled me was that Biden’s raw vote total had increased substantially in both states, and Trump’s raw vote total had not changed at all!

That is an enormous red flag for fraud being committed, and I knew right away that the Democrats, who had failed at dislodging Trump from office by impeachment, were now going to deny him victory by stealing the election.  Further confirmation came when I saw the pictures and video of mystery bags and boxes being dragged into Detroit’s TCF Center at 4 A.M., followed by the windows in the room being boarded up and by the ejection of Republican poll-watchers.

Well, the election theft appears to be complete, with the corrupt media declaring Biden president-elect, and lefties dancing in the streets (unmasked!) with joy.

So I asked myself, by how much did Trump actually win this election if the fraudulent votes are not included?

Fortunately, the internet geeks have been busy massaging the election data for statistical anomalies, and today (Nov. 11), I got my answer (partly) from information posted via The Gateway Pundit by blogger “PedeInspector” (whom I will refer to as “Pede”).

Perhaps you saw the video of a network Election Night broadcast made by a person (not identified), also posted on The Gateway Pundit, which showed a sudden switch of votes from Trump to Biden in Pennsylvania the night of Nov. 3.  I took two screen shots from that video.  Before the switch:

Well, this video also intrigued “Pede,” and he (or she) went to work.  Pennsylvania uses Dominion voting systems, which forward their data to Edison Research, which then Javascript-encodes it and sends it on to the New York Times and the networks.  So “Pede” downloaded the Edison data for Pennsylvania from the New York Times at this address and analyzed it to locate all similar vote switches, as well as for votes that just went missing.  (Although I’ve given you the link, I wouldn’t bother opening it, because it’s just a big pile of Javascript code that’s incomprehensible to the naked eye unless you know your Javascript.)  In the Javascript code, “Pede” located the specific code that changed the voting percentages for Trump and Biden:

Now, I know nothing about “Pede,” but as you can see, the vote switch was shown on TV, and “Pede” located that percentage switch in the code, which means that “Pede” is working with real data and has the skills needed to identify the code and expose the anomalies.  My experience has been that geeky internet bloggers are a hell of a lot more honest than most any politician, and I think we can safely proceed on the assumption that the research “Pede” has done is offered in good faith.  (The only clue to “Pede’s” identity is that “Pede” refers to the events as “Nr. 187” and “Nr. 188”, using the European abbreviation for “number” instead of the American “No.” which suggests that “Pede” was born or educated overseas.)

As “Pede” puts it, “I made a script to run through the data and gather all instances where votes switched from Trump to Biden.  ‘Lost Votes’ means that the total amount of votes counted decreased by that amount throughout the counting.”

Here are the results “Pede” found for the swing states:

Remember, these numbers are for electronic fraud, above and beyond the paper-ballot fraud also committed and which is slowly being uncovered and documented.

Here’s what I think happened:

The crooked Democrats actually believed their own propaganda — that Biden would win easily or that, at worst, it would be a tight race.  So they created enough fraudulent paper ballots to be inserted into the counting to overcome any worst-case situation for them, which would be a “squeaker” Trump win.  But Trump still led in the upper Midwest, even with the paper-ballot fraud, so they had to switch or destroy enough votes electronically to give Biden a “squeaker” win.

But as the votes were being counted on Election Night, it was quickly clear that Trump had a blowout win in Pennsylvania, far more than could be fraudulently papered over, so electronic fraud there went into overdrive, allowing it to be easily detected.  (Although “lost votes” apply to the total vote count, forgive me if I suspect that most of them are Trump votes being thrown away.)

As of midnight on Nov. 11, the candidates’ vote totals, corrected for “Pede”-detected vote switches, are as follows: