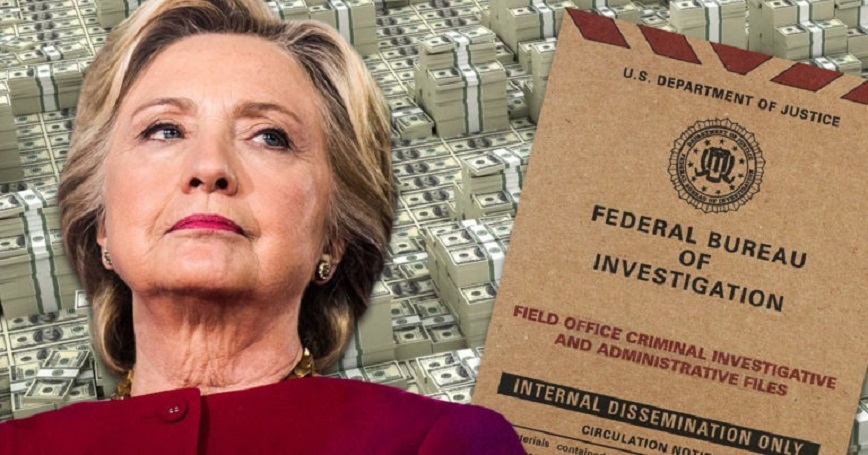 Comey slow-walked a FISA warrant that most likely would have found the Clinton campaign accepted foreign donations against FEC regulations.

Field agents with the FBI had an open investigation in 2014 focused of foreign finances flowing into Hillary Clinton’s fledgling presidential campaign. But instead of receiving the FISA warrant they requested, FBI executive leadership briefed the candidate on the issue.

Declassified memos revel that FBI field agents became frustrated with being stonewalled from securing a Foreign Intelligence Surveillance Act (FISA) warrant to the point they escalated their request outside the chain of command to then-FBI Director James Comey.

“The FISA application has remained in limbo for the last four months, even though subsequent investigative activity by [redacted] provided additional probable cause for the FISA application,” one FBI operative wrote to Comey in April of 2015.

That communication stated the FBI field office leading the probe and requesting the FISA warrant was “still uncertain as to why the application has not been sent to DOJ for final approval although several reasons have been put forth by CD [Criminal Division], most recently that the decision to put the application on hold originated ‘on the seventh floor.’”

The seventh floor of the FBI headquarters in Washington, DC, is where the FBI director and his staff have their offices.

Comey’s response to the communication was a non-committal, “Don’t know anything about this but will get smarter.”

Instead of examining the FISA request or the reasons the FBI field agents requested the warrant, FBI leadership decided to provide Clinton’s team with a “defensive briefing” in October of 2015, just as her presidential campaign was gearing up.

According to the declassified memos, the briefing was delivered to Clinton’s legal team led by David Kendall and Katherine Turner.

“Kendall and Turner were advised the FBI was providing them with this briefing for awareness and so Ms. Clinton could take appropriate action to protect herself,” a summary memo stated. “They were also told the FBI was seeking their assistance to identify other appropriate recipients of the brief, if any.”

Clinton’s lawyers were told, “the campaign should increase its vigilance of contributions related to any of the matters discussed above.”

The now declassified memos redact the name of the foreign country in question as well as the FBI field office that requested the FISA warrant. But they do make clear the plot involved “foreign aid money that might be contributed to her campaign should/when she announce(s) her run for POTUS.”

The memos offer no evidence Clinton herself was aware of the plot.

It is unclear whether the FIA warrant application was ever truly entertained by FBI leadership, or ever advanced to the FISA court for consideration.

The memos were declassified in an 11th-hour order by outgoing-President Trump. They serve to illustrate the inequitable contrast in the way the FBI treated Clinton and Trump, respectively.