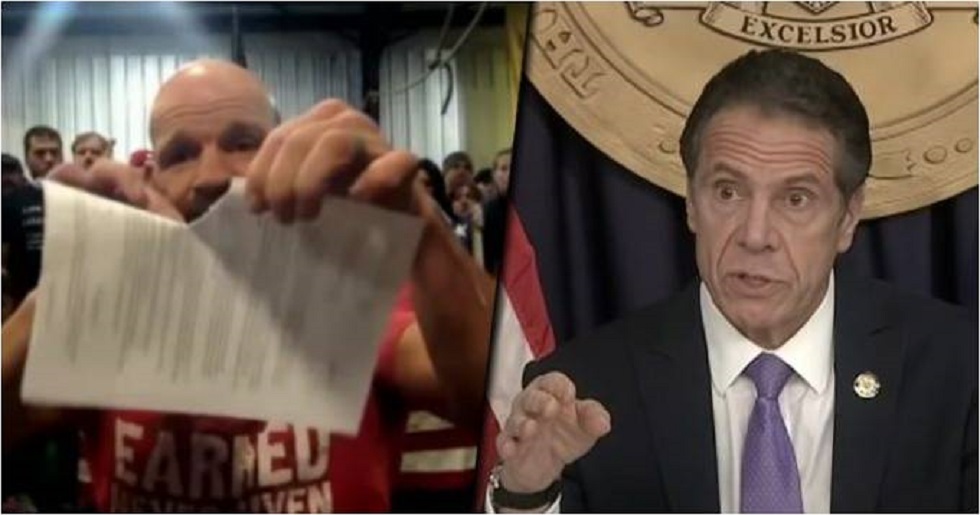 A fed-up Marine, who owns a gym in New York, decided to express his defiance by ripping up a $15,000 fine that he received for violating coronavirus restrictions. In addition to the bold action, taken on live TV, he also sent out a strongly worded message about the covid mandates. Is he wrong? You decide.

Robby Dinero — not to be confused with actor Robert De Niro — has had enough of the coronavirus guidelines in New York. The small business owner decided to openly defy the rules, which ordered businesses to close and limited public and private gatherings to just 10 people. The New York native’s defiance was met with a $15,000 fine, which Dinero used to further express his contempt over the mandates.

Before we get to that, though, let’s go over the background info. Dinero, a U.S. Marine who spent 14 years serving as an infantry officer and the owner of Athletes Unleashed — a CrossFit gym in Orchard Park, was reportedly “fined after a confrontation with an official from the Erie County Health Department and Erie County sheriffs during a protest against the coronavirus restrictions on businesses held in Dinero’s gym Friday,” The Blaze reported.

“The police and the health department official were told to leave Dinero’s property and ‘go get a warrant’ in a video that went viral,” the outlet added. Following the ordeal, Dinero was interviewed by Fox News about the incident and what happened afterward.

“I posted on Facebook Friday night that I wanted to get together business owners and protest and fight the lockdown that I feel is infringing upon our freedom,” Dinero told Fox News. “We were about 20 minutes into that meeting when some sheriffs and a department of health official showed up uninvited. My business was closed, we were not conducting business. This was a protest.”

When Dinero was asked by the protesters what they should do, he told them to get the officials to leave. “Those patriots took it upon themselves to stand shoulder to shoulder and tell them to get out. And, we were right, because if we were wrong, they would have called for backup and come back. But, they didn’t, they left,” the gym owner recalled.

The sheriff and the health department official did return later, however, and they served Dinero with a $15,000 fine for hosting the protest. This, of course, didn’t sit well with the Marine, who appeared on live TV Tuesday evening and ripped up the $15,000 fine for violating the coronavirus restrictions in defiance of rules, but it’s what he said that’s really striking a chord with others.

The father-of-four criticized government officials, including New York Governor Andrew Cuomo and Erie County Executive Mark Poloncarz, for continuing to collect their taxpayer-funded, six-figure salaries while American workers and business owners are being told they cannot earn a living to feed their families.

Pointing out that Cuomo gets to draw “a $225,000 salary” while Poloncarz draws “a $303,000 salary,” Dinero said he wants them to explain why “they get to take our money but we don’t get to earn.” Saying “the working man and woman doesn’t get to earn,” Dinero further rebuked New York officials, saying, “They don’t get to tell us that.” Claiming they “don’t have the guts” to answer his questions about it, Dinero accused them of “the worst kind of leadership.”

When asked how far he would take his complaints, Robby Dinero — who received many honors while serving his country — further rebuked New York officials, suggesting they look children, like his own, in the eye and tell them that their parents’ jobs are not “essential.”

“I plan to take it as far as I possibly can,” Dinero explained before issuing a challenge to Governor Cuomo and Poloncarz, specifically. “I want to ask Governor Cuomo and Poloncarz — I want to ask, it’s a challenge to them: Come to my dinner table, come to any of the dinner tables back here,” he continued, gesturing to his supporters, “Look our kids in the eyes and say, ‘Your father, your mother isn’t an essential worker. They don’t have the guts to do that.”

Showing he does have guts, though, Dinero tore up the $15,000 fine at the close of the interview. Many Americans are rallying behind Dinero and others, expressing solidarity against the coronavirus restrictions, including Erie County Comptroller Stefan Mychajliw, who issued a statement to ABC7, blasting “power-hungry politicians” who are “punishing” businesses.

“Mark Poloncarz crossed a line. Punitively punishing a small business owner that served our country is despicable. People are fed up. The resistance against power hungry politicians destroying businesses with arbitrary COVID rules they make up as they go along has begun. Enough is enough. Mark Poloncarz is a bully that cares more about shutting down the economy, closing schools, regulating churches and damaging families than protecting the health of our community.”

Further showing his support for Dinero, Mychajliw shared a link to a GoFundMe page that was set up to cover the cost of the gym owner’s fine. As of Wednesday afternoon, over 800 people had donated over $30,000 to support Robby Dinero and his protest. The only question is, do you support him and other business owners like him? We’ll let you decide.