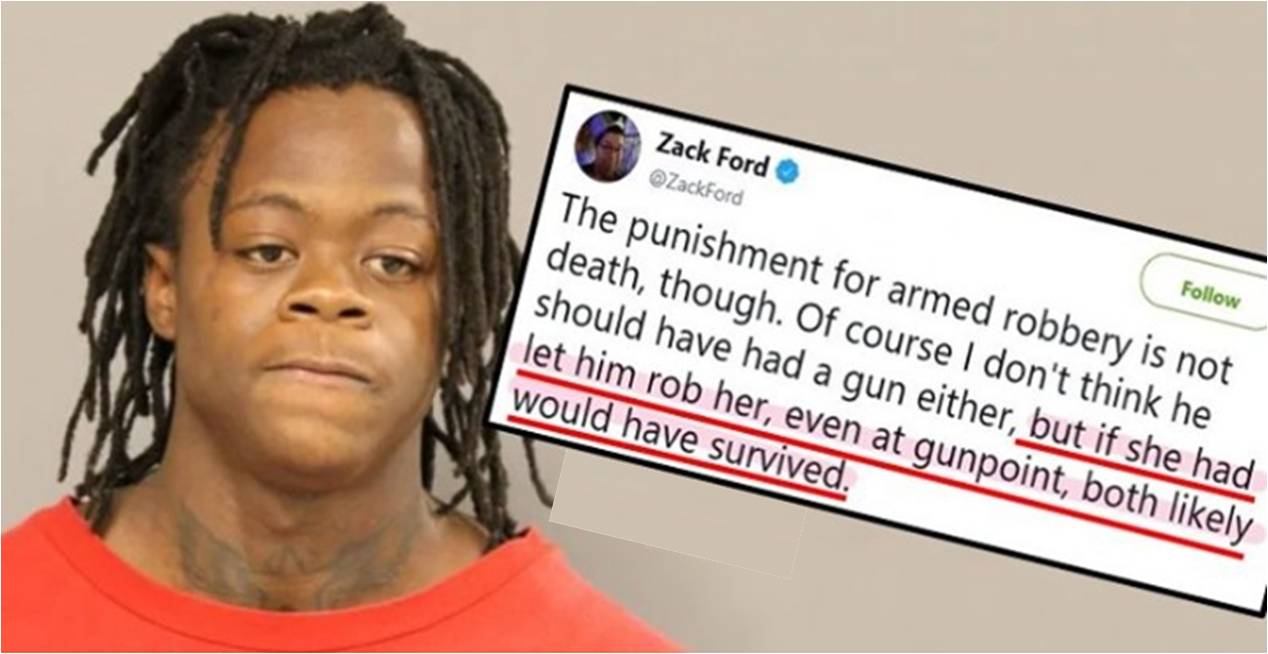 After pulling a gun on a woman, an armed robber was fatally shot when his victim unveiled her own concealed carry. Despite his lengthy criminal history, the violent offender was quickly defended as the real victim.

While standing at a bus stop in Chicago at around 6 a.m., a 25-year-old woman was approached by a young man with nefarious intentions. Within an instant, 19-year-old Laavion Goings brandished a gun, ordering the woman to hand over her possessions.

Surveillance cameras captured the brief encounter as it unfolded on West 103rd Street. Video footage showed that the woman had just seconds to react. What her would-be robber didn’t know was that she wasn’t as defenseless as she appeared.

The young woman happened to be a well-trained gun owner with a concealed carry permit, according to ABC7 Chicago. Just as Goings thought he had his victim where he wanted her, she pulled out her own firearm and shot him in the neck, forcing her attacker to flee as she ran in the opposite direction.

Goings was later tracked down by police and transported to Advocate Christ Medical Center, where he died from his wound. Fortunately, his victim sustained only a minor injury and was released without charges. However, not everyone was glad that the young lady had the means to protect herself.

Zack Ford, who is the editor of ultra-progressive online newspaper Think Progress, immediately came to the late criminal’s defense. In a series of tweets, Ford not only lamented the death of the repeat offender but blasted the young woman for protecting her life.

“The kid was 19!” Ford tweeted. “I just feel like we’re being way too disposable with his life. A gun death is a gun death, and the fact she was able to protect herself in no way motivates me to change my belief that she should not have had a gun in the first place.”

Despite Ford’s popularity with his followers, his tirade encountered a swift backlash with nearly every commenter criticizing his defense of an armed criminal. Still, the response prompted Ford to double down on his unpopular stance.

“The punishment for armed robbery is not death, though. Of course I don’t think he should have had a gun either, but if she had let him rob her, even at gunpoint, both likely would have survived,” he replied. “It’s the praise for her gun ownership that bothers me.”

However, the man Ford is defending has a history of arrests, which included violence. In fact, he had allegedly attacked a police sergeant and an officer during a drug raid. He was only out of jail for two months when he was fatally shot while attempting to rob the woman.

As such, Ford’s weak rationale began to break down as social media users pointed out the hypocrisy and logical fallacy in his explanation. Within hours, Ford was compelled to issue an apology and explain his intent for the previous tweets, which he has since deleted.

“First, I believe people have the right to defend themselves,” he began. “My ideal is for a world in which guns do not have to be a part of anyone’s daily life and in which gun deaths are not a part of our daily news. I stand by this ideal and disagree with the proposition that more guns will make people safer.”

Ford promised to try to be more sensitive in his fight to eradicate the world of firearms. However, his gun-free world would require a violence-free utopia, which simply isn’t a possibility in reality.

Criminals will always be able to obtain weapons to carry out their sinister deeds. Since we cannot stop them all, our best response is to equip and prepare law-abiding citizens with an equal means of defense.