Flashback Video: Fox10 Accidentally Releases Early Graphic Showing Katie Hobbs Winning Over 2 Weeks Before The Election – They Are On Course To Predict The Final Result 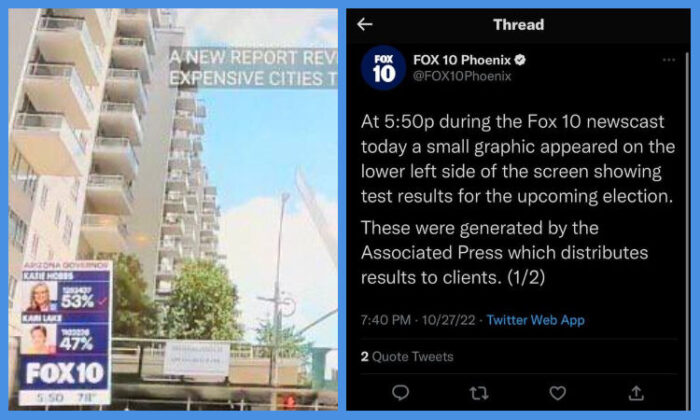 A local TV news station in Arizona was caught airing a graphic showing Katie Hobbs, the Democratic nominee for governor, as the winner in her race 12 days out from the midterm elections.

Although Fox 10 did not name the specific race it accidentally shared results for, screen-grabs of the newscast circulated on social media showing results for Arizona’s gubernatorial election — which is between Democratic candidate Katie Hobbs and Republican candidate Kari Lake.

The graphic, which appeared on FOX 10 Phoenix at the bottom left-hand part of the screen, showed Hobbs with 53% support compared to 47% for Republican nominee Kari Lake. Hobbs, who is currently Arizona’s secretary of state, had a check by her number, indicating she was the victor.

At first, they tried to scrub the video from the internet but we have a copy!

Here’s a still image with a red next to Katie Hobbs, declaring her the winner 53-47 over Kari Lake

“At 5:50p during the Fox 10 newscast today a small graphic appeared on the lower left side of the screen showing test results for the upcoming election. These were generated by the Associated Press which distributes results to clients,” FOX 10 said in a pair of tweets. “This graphic was never meant to go on air — the numbers were only part of a test. The station has taken steps to make sure this cannot happen again.”

FOX 10 says the graphic was generated by the Associated Press!

It’s so odd that those numbers are there. It’s very specific. A test wouldn’t have that.

The AP and other fact-checkers said at the time that this was a test and not the real result!

However, tests never show the number of voters and other specific things!

The mistake, which Fox 10 acknowledged in statements shared on both Twitter and Facebook, triggered some harsh commentary from the news station and prompted individuals to post conspiracy theories on the social media platforms.

“Why is it when these ‘tests’ are done, the Democrat is always in the lead?” one Twitter user wrote in response.

“I hope you get sued for this. I can’t wait to see the discovery process happen. Are Fox 10 and the @AP in the process of rigging an election? Who put you up to this? It will all come into the light…” another user said.

On Facebook, one user accused the media of “already telling us” the election outcome “regardless of the vote tally.”

“Voter Intimidation Fox 10 Phoenix. Ballots are still being collected and your station does this!! No Excuse!!” another user said.

“Making you aware that before every election night, the @AP tests its election results system — which we use — to make sure it’s running properly. You can’t test it properly without putting numbers in to test it,” WTVC said.

Lake scolded the media in an “emergency press conference,” accusing journalists of trying to “influence this election” in response to how news outlets reported on a break-in at Hobbs’s office in Phoenix earlier this week and allegations from the Arizona Democratic Party that she was responsible.

She’s the female Trump, and like President Trump, her media expertise makes her nearly impossible to trip up. The mainstream media have had a really, really hard time with her, because Kari knows the game they’re playing, and she plays it a heck of a lot better than they do.

(This post may contain disputed claims. We make no assertions as to the validity of the information presented by our Opinion Columnist. This is an opinion article, and this post should be treated as such. Enjoy.)

One thought on “Flashback Video: Fox10 Accidentally Releases Early Graphic Showing Katie Hobbs Winning Over 2 Weeks Before The Election – They Are On Course To Predict The Final Result”