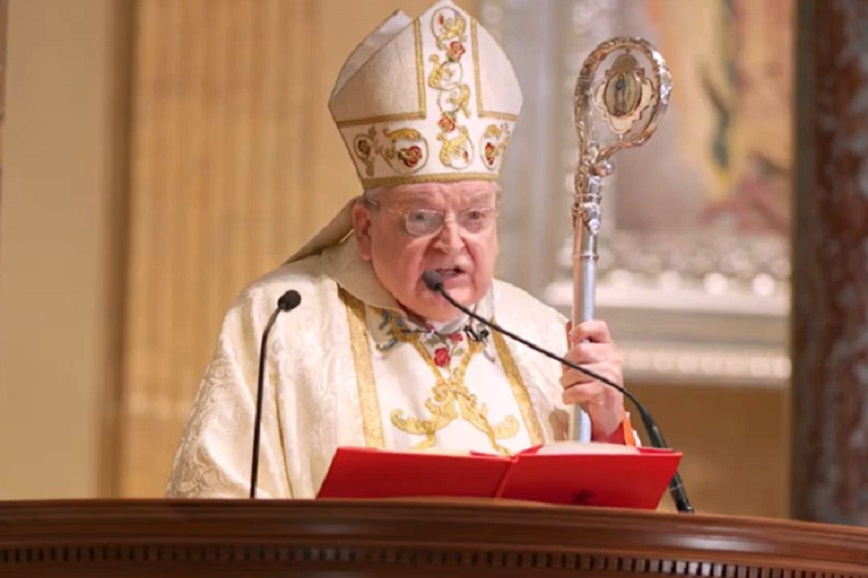 “So many in the Church seem to have no understanding of how Christ continues his saving work in times of plague and of other disasters.”

At a time when “we need to be close to one another in Christian love, worldly forces would isolate us and have us believe that we are alone and dependent upon secular forces, which would make us slaves to their godless and murderous agenda,” Cardinal Raymond Burke said during a Saturday homily.

Burke, the founder of the Shrine of Our Lady of Guadalupe, delivered a powerful homily at the La Crosse, Wisconsin, pilgrimage site Saturday evening.

“We come to Our Lady of Guadalupe on her feast day with troubled and heavy hearts. Our nation is going through a crisis which threatens its very future as free and democratic. The worldwide spread of Marxist materialism, which has already brought destruction and death to the lives of so many, and which has threatened the foundations of our nation for decades, now seems to seize the governing power over our nation,” Burke began his sermon.

“To attain economic gains, we as a nation have permitted ourselves to become dependent upon the Chinese Communist Party, an ideology totally opposed to the Christian foundations upon which families and our nation remain safe and prosper,” he continued.

Burke spoke specifically of the United States, but “evidently many other nations are in the throes of a similar, most alarming crisis,” he said.

“Then there is the mysterious Wuhan virus about whose nature and prevention the mass media daily give us conflicting information. What is clear, however, is that it has been used by certain forces, inimical to families and to the freedom of nations, to advance their evil agenda. These forces tell us that we are now the subjects of the so-called ‘Great Reset,’ the ‘new normal,’ which is dictated to us by their manipulation of citizens and nations through ignorance and fear,” said the cardinal.

Given these “grievous” conditions, Americans are now being asked to find “the way to understand and direct” their lives in a “disease and its prevention,” rather than “in God and in his plan for our salvation.”

“The response of many bishops and priests, and of many faithful, has manifested a woeful lack of sound catechesis. So many in the Church seem to have no understanding of how Christ continues his saving work in times of plague and of other disasters,” Burke said.

“What is more, our holy mother Church, the spotless bride of Christ, in which Christ is ever at work for our eternal redemption, is beset by reports of moral corruption, especially in matters of the sixth and seventh commandments, which seem to increase by the day. In our own nation, the reports about Theodore McCarrick have rightly tempted many devoted Catholics to question the shepherds, who in accord with Christ’s plan for the Church are to be their secured guides by teaching the truths of the faith, by leading them in the fitting worship of God and in prayer to him, and by guiding them by means of the Church’s perennial discipline,” he continued.

Instead, the faithful too often “receive nothing in response, or a response which is not grounded in the unchanging truths regarding faith and morals.”

“They receive responses that seem to come not from shepherds but from secular managers. The confusion regarding what the Church truly teaches and demands of us in accord with her teaching generates ever greater divisions within the body of Christ. All of this cripples the Church in her mission of witness to divine truth and divine love at a time when the world has never needed more the Church to be a beacon,” Burke declared.

“In encountering the world, the Church falsely wants to accommodate herself to the world instead of calling the world to conversion in obedience to the divine law written on every human heart and revealed in its fullness in the redemptive incarnation of God the Son,” he added.

The cardinal said these troubles “present a formidable challenge” to Christian life and have produced “the most painful suffering.”

“Yes, our hearts are understandably heavy, but Christ, through the intercession of his Virgin Mother, lifts up our hearts to his own, renewing our trust in him, who has promised us eternal salvation in the Church. He will never be unfaithful to his promises. He will never abandon us,” Burke concluded. “Let us not be beguiled by the forces of the world and by false prophets. Let us not abandon Christ and seek our salvation in places where it never can be found.”