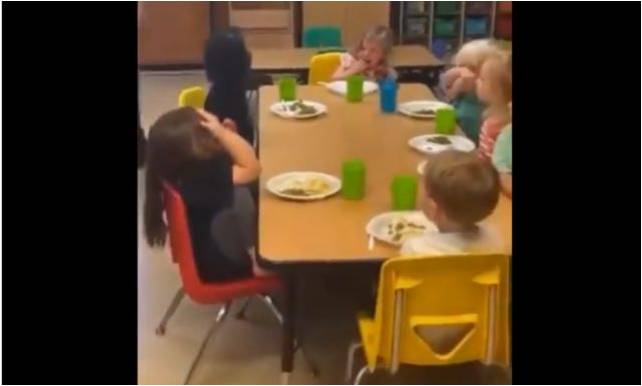 A viral video from a Hamilton daycare has devastated parents and horrified the community.

WCBI News in Columbus said that numerous concerned parents reached out to them overnight Wednesday. Because it does involve kids, the local media were not showing the video or faces at this time but luckily we obtained a copy of the disgusting video!

We decided to present the video for the children’s sake!

The video shows daycare workers wearing Halloween masks and scaring the kids. Defiant America has learned the video of the incident was recorded last month.

Lil’ Blessings Childcare and Learning Center made a post on Facebook stating those involved have been fired and MSDH has been notified by the director.

Videos showed children being chased by what they saw as a scary monster.

Instead, it was their daycare worker. The person that was supposed to keep them safe at Lil’ Blessings Daycare and Learning Center.

“We thought we knew these people, we’re from here. I can not communicate the words how I feel. I’m devastated for my baby,” said Alissa Hays, the mother of one of the children in the video.

Keegan and Alissa Hays saw the video of their daughter after another parent sent them the video to show what was going on at the facility.

Alissa Hays’ husband was one of the first parents to get their child after the video started circulating in the small Monroe County community.

“For this to happen was actually shocking on top of very angry. When something like that happens to your kid there are a lot of thoughts that run through your head,” Keegan Hays.

When Keegan Hays demanded answers he said some of the workers did not seem to take the matter seriously.

We talked to the daycare director who declined to do an on-camera interview. The daycare did release a statement on social media saying “the director was not aware that this happened but when it was made public the situation was taken care of people were fired. The director notified MSDH.”

Now, some parents are wanting to take legal action.

Right now, the Monroe County Sheriff’s Office has not filed charges against anyone at the daycare in the investigation but Sheriff Kevin Crook urges patience.

“I understand people want retaliation or retribution or whatever they want. justice is really what they want. Not to do anything irrational and to take matters into their hands and go after some of these young people or whatever who they know is involved or the owner of the business that’s gonna get them in trouble, ” said Crook.

The big question is, will parents be sending them back if they reopen?

“Under different circumstances, full surveillance, better management, we would possibly consider just for the convenience of being here in Hamilton,” said Keegan Hays.

A spokesperson for the Mississippi State Department of Health says the matter is under investigation.